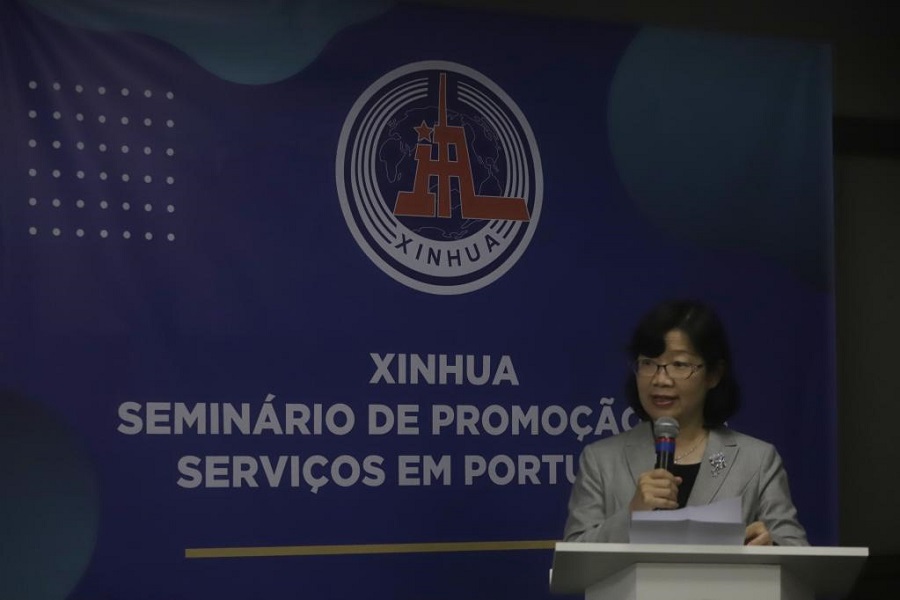 We strive to create a friendly atmosphere of mutual understanding for the better development of relations between Brazil and China, said Chen Weihua, director of the China Xinhua News Agency Rio de Janeiro branch.

“Brazil is the largest country in Latin America and a strategic partner of China. Bilateral relations and practical cooperation between both countries in multilateral forums have taken on a unique meaning for both countries,” said Chen Weihua, director of the Rio de Janeiro office of China’s Xinhua News Agency.

Weihua spoke at the opening of a seminar on promoting Xinhua’s services in Portuguese held in Sao Paulo this Wednesday (14), emphasizing the need to promote “approaches and cooperation to create a friendly environment and mutual understanding to better develop relations.” between Brazil and China.

XINUA FOUNDATION IN THE STRUGGLE FOR THE LIBERATION OF CHINA

“For this reason, it is necessary to think about the cooperation of key sectors such as the media,” Xinhua director added at an event that provided an overview of the historical trajectory of the Chinese agency founded by the Chinese Communist Party. (PCHR) during the patriotic struggle for the liberation of China from the foreign yoke in 1935, already in the final phase of the revolutionary Long March.

The workshop opened with a video showing the history of the Agency, with photographs of its first site, preserved as a museum, visited by numerous delegations. From the small house where Xinhua was located, he reported on the achievements and spread the ideas that would lead to the liberation and the beginning of the construction of socialism in China.

An excerpt was quoted from President Xi Jinping’s speech at the recent 20th CPC Congress, where he stressed that “The media is taking on the extremely important role of social responsibility as the main agent for building the consensus so necessary to find answers to and solve the problems that affect us. at the national and global levels.”

At the seminar, which was attended by representatives of the Chinese government, as well as Brazilian and Chinese media, Xinhua, in addition to its historical trajectory, presented its services and international presence, as well as its system covered by the Xinhua Belt and Road Initiative platform, which supports the distribution information about the Chinese economy, investments in its development and useful information for commercial and cultural exchange with China.

Various speakers stressed that the central aspect of Xinhua’s role is that relations between Brazil and China develop on a bilateral basis with the awareness of the need to expand South-South relations, promoting mutual understanding, mutual understanding and development of the two peoples.

Created by the China Economic Information Service, it is intended for governments, companies and institutions in general.

Luo Jingjing, head of the Xinhua São Paulo office, made the presentation of this platform, explaining that this initiative is mainly aimed at meeting the investment and trade needs of Belt and Road users, providing services such as a database, information consultation, specialized research, useful items for transactions in general, and online advice.

“After three years of the pandemic, the two countries have a better understanding of the value of working together to overcome difficulties,” said Chen Peijie, Chinese Consul General in Sao Paulo, in her speech.

“The exchange and cooperation between the media,” the Chinese consul added, “has also made great strides, with a growing number of reports on important events and the daily life of the population.”

“Through this, the necessary links are created to deepen the mutual study of cultures, promote interpersonal exchange and exchange of development opportunities, which gives a strong impetus to the friendly relations between China and Brazil,” said Chen Peijie.

The President of CMA, Xinhua’s partner company, spoke about the history of cooperation with China’s official news agency and future prospects for relations between Brazilian and Chinese media and communication groups, highlighting that among the joint Sino-Chinese Summit and BRICS Media Forum. Conceived by Xinhua News Agency and co-organized with media partners. Projects aimed at expanding the debate on “the role of the media in building a more democratic, diverse, egalitarian and fair international system.”

The Seminar also reported that in 1961, Xinhua opened its first branch office in Brazil, in Rio, before the establishment of diplomatic relations between the two countries since 1974.

Director Chen Weihua said, “With the development of relations between Brazil and China and closer exchange and cooperation in various fields, Xinhua has opened two other branches in Brazil and Sao Paulo.”

“In particular, Xinhua affiliates in Brazil aim to disseminate content about the main events of Chinese-Brazilian diplomatic relations, the daily life and activities of the Chinese communities living here, and the main events in Brazil. It also seeks to promote the work carried out by experts, politicians and other representatives of the Chinese and Brazilian society on a variety of topics that cover Sino-Brazilian relations,” said Xinhua Portuguese social media editor Alessandra Scangarelli Brits.

“Xinhua adheres to the principle that the media should promote mutual understanding among different peoples and strengthen exchanges and cooperation among them to help build a more harmonious and peaceful living environment every day,” Alessandra said. .

Among the data presented at the workshop, Xinhua leaders highlighted that the agency currently has branches in 181 countries and publishes news and other services such as databases in Chinese, English, Spanish, French, Russian, Portuguese, Arabic and Japanese. .

Folha de São Paulo’s commercial executive Marcelo Benez presented elements of his newspaper’s partnership with Xinhua in his lecture. The project to develop the application together with Diário de Pernambuco was also noted.

A 33-year-old Portuguese man died in a hunting accident in Spain.

See also  Santos Silva commemorates the 50th anniversary of the massacre of the Portuguese at Viriamou, Mozambique.
Continue Reading