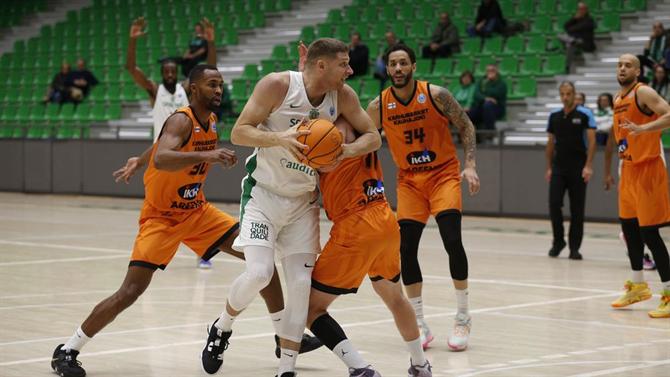 Sporting are eliminated from the FIBA ​​Europe Cup. Forced to beat Karhu Basket by more than 32 points in order to rely on himself and reach the 1/8 finals as 1st place in Group G or at least win the 6th game day in order to hope that Egis Kormend will beat Anvil Wloclawek, move up to second place. in pool, the lions didn’t even have to do the math when they lost to the Finns in Pavilhão João Rocha 84–93 (25–26, 20–8, 24–36, 15–23).

Even if they had won, Lisbon would have been left on the sidelines as the Poles from Wloclawek went to Kormend, thrashing the Hungarians from Egis 67-94, saving the locals without any triumph in this group stage.

With a good entry, whose intense defense and two against one surprised the opponent and allowed him to reach a 12-2 advantage on 6m, and DJ Fenner (19 points) registered 7 points, by the end of the first quarter Karhu had already managed to balance the match, converting 7 triples in 10 attempts, which allowed him to take the lead at 18-19 for the first time, achieve the first tie at 25-25 and finish the period with a score of 25-26.

Despite the serious difficulty of Pedro Nuno Monteiro’s team to stop their opponent’s shots beyond 6.75 meters and after the latter scored the eighth triple by 28-32, Sporting lived through their best moment and the greatest hope that everything is possible, with building an unexpected partial 15-0 (45-34) which started Marcus LoVette (5 pass) scoring 9 of his 14 points to go into the break to win by 11.

Everything seemed possible. Until reaching 32 points difference. This would have been possible if the Portuguese team had maintained a defensive level and the Scandinavians, who, however, were already up 8/17 on 3-pointers and 4/13 on 2-pointers, continued to fail and make losses (12).

He will get three more, all from different players, while on the opposite side, Travante Williams (21 points, 9 reps, 3 assists), who scored 13 points in the period, was the one who tried the hardest to keep the Green and White team. and able to fight for victory.

Get 69-65 on a pass to LoVette’s basket with 47 left in the quarter. And then… disaster struck. In those few seconds, Sporting made mistakes, made unnecessary fouls and started by losing a 0-4 (69:70) partial lead from the free throw line, which added another 0:11 (69:70) at the start. In the last period, in which Karhu scored three more out of three, the gap in the score in favor of the outsiders reached tens for the first time.

From then until the Finns final, where performances by Severi Kaukiainen (15 points, 2 reps, 5 assists), Lee Skinner (16 points, 6 reps, 5 assists, 3 rebounds) should never really risk losing control. match or not be first in the group.

As part of the Lions, who scored only 3 (!) points from the bench against 41 substitute opponents, the contribution of Isaiah Armwood (20 points, 7 cuts) should also be highlighted.

See also  Draxler 'surprised' by Benfica's size: 'I made a decision at the last moment and have not regretted it' - Benfica

See also  Draxler 'surprised' by Benfica's size: 'I made a decision at the last moment and have not regretted it' - Benfica