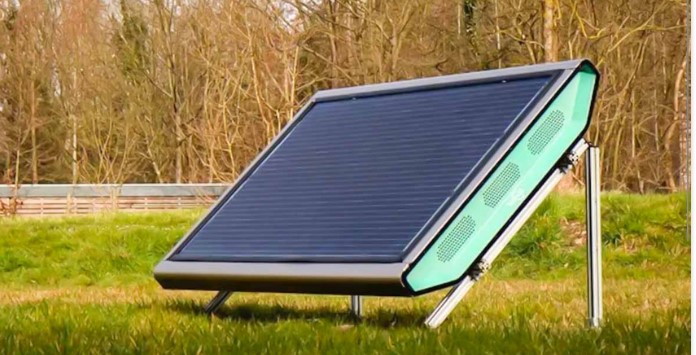 Rooftop solar panels that capture sunlight and water from the air will soon become a reality. Like photovoltaic panels, hydrogen panels will be connected, but with gas pipes rather than electrical cables.

This new solution will soon be on the market through a partner company.

For more than ten years, researchers have been developing and refining this technology, and the final prototype has been embodied in an attractive design. Komate Engineering and Design.

How do solar panels work to produce hydrogen?

A hydrogen solar panel converts water vapor in the air into hydrogen using sunlight. The researchers guarantee that they can produce about 250 liters of hydrogen per day. with an efficiency of 15%.

This Solhyd project has entered a phase of transition from research to investment by a partner company.

Simply put… hydrogen panels, are solar panels that split water molecules to produce hydrogen gas using solar energy. Very dry places on Earth are not suitable for this technology due to the arid environment.

These new panels are identical to traditional solar panels, but instead of an electrical cable, they are connected by gas pipes.

The top layer of the panel generates electricity, while the bottom layer is a piping system that generates hydrogen by extracting water molecules from the air through a membrane.

Hydrogen solar panels are small, modular and ideal for decentralized production. It is estimated that 20 of these panels can provide electricity and heat to a well-insulated house with a heat pump all winter long.

When installed together with a solar thermal collector and traditional solar panels hydrogen solar panels can help heat homes and provide year-round electricity.

Estes solar panels do not store hydrogen, work at low pressure, so they have high safety and economy. The produced hydrogen is collected from the panel and then compressed if necessary (which allows it to be stored indefinitely). Of course, some applications do not require gas compression, or other forms of storage will be used.

The use of hydrogen produced by solar panels

Later, with advances in technology, it will be possible to come up with any application, such as large-scale ammonia production or even small stand-alone systems.

Costs will be the same as in the photovoltaic market, as no precious metals are used in the production of these panels, which keeps the price affordable.

Since 2011, several prototypes of these solar panels have been tested, so the researchers are confident that the commercial production of these hydrogen solar panels will start.

It was in September that Solhyd began industrial development of the project, moving from university premises to a 350 square meter facility near Leuven with the help of the municipality of Flanders.

Initially, several dozen panels will be produced for use in small pilot projects. But by 2026, the team hopes to produce more than 5,000 hydrogen solar panels per year at a price similar to photovoltaic panels currently on the market.

Images of solar panels for hydrogen production from Solhyd

See also  Economic situation 'will get worse before it gets better': IMF director warns
Related Topics:
Up Next

Chaos ordered by Elon Musk and the explosion of memes. Internet users react to changes on Twitter – Internet

The brand sells the launch series in Europe in 24 hours

See also  Gas has risen in price by 11%, while Europe remains in the red - Markets in a minute
Continue Reading