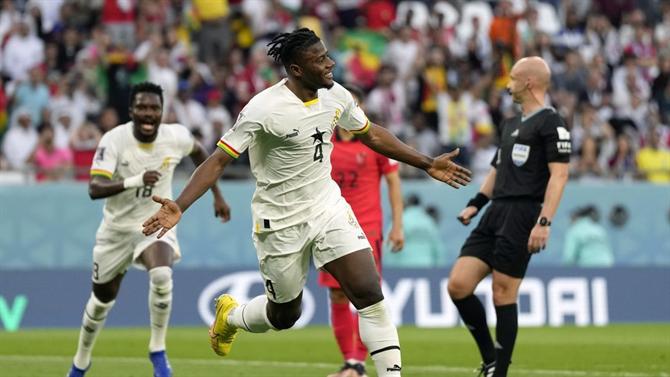 This Monday afternoon, Ghana beat South Korea 3-2 in their Group H Round 2 match – the same as Portugal and Uruguay, who have been playing since 19:00 – of the World Cup in Qatar, played at the Education City Stadium in Doha.

The result, due to which the Asian team, coached by the Portuguese Paulo Bento, is almost irrevocably eliminated from the 1/8 finals of the competition: only the victory over Portugal on Friday, December 2, in the last meeting, will allow the Asians to continue to dream of reaching the next stage, and even it’s not liquid: they may still need a favorable combination of results, whether it’s today’s Portugal-Uruguay or Friday’s Uruguay-Ghana, to still be able to cherish vague hopes of moving further in the test.

A game in which the technique and speed of the Ghanaians, after impressive initial pressure and dominance of the South Koreans, dictated the laws, and in which the fragility of the Asians in the air was visible, to an imbalance in the first half: two centers from the left, as well as Salis (24′) and Mohammed Kudus (34′), which gave the Africans a 2-0 lead at the end of the first half, in which South Korea were much faster and dominated before.

Paulo Bento launched Kang-in Lee in the second half, and the change had its consequences: it was his center after Cho Kyu-Song headed 1-2 in the 58th minute, three minutes later, the striker hit back the South Korean. (61′), for 2-2. But soon after, Mohammed Kudus also took advantage of Mensah’s left-handed cross to secure the final score of 2-3 (68 minutes).

A crazy game in which both teams gave their best in the last minutes and as compensation, one of the most emotional matches of this World Cup in Qatar, which leaves the team coached by Otto Addo – he did not use the Sporting player Fatawa, he was sitting on the bench – resumed the race for one of the two places in this group H in the 1/8 finals, now with three points.

South Korea sees its hopes of finishing in the top 16 in the competition almost irrevocably vanishing even before the game against Portugal. On Friday, we will see if this will relieve the Asians of the pressure or, on the contrary, lead them to an even more decisive game against Portugal, in farewell to the Asians from this Group H, which may well also be the choice that Paulo Bento coached for this World Cup.

The Ghana had three shots on goal… they scored three goals: extreme scoring, and the speed and technique of their players dictated the laws. But he had to suffer at the beginning and react sharply to everything from the South Koreans, who had to put eight units (!) On a large area of ​​​​the enemy, in the “all or nothing” phase. Unsuccessful. Pile of goals, football and emotions to admire… before the Portugal-Uruguay match.

Annoyance for Paulo Bento: After a yellow card against Uruguay, this time, after the final whistle, he saw a direct red card from English referee Anthony Taylor for protesting. And he should not be on the bench this Friday against Portugal as he will have to be sidelined for at least one game.

As a reminder, below are the main incidents of the match.

The injuries sustained by Fernando ″Conde″ were not the ″cause of death″ of the electrician.