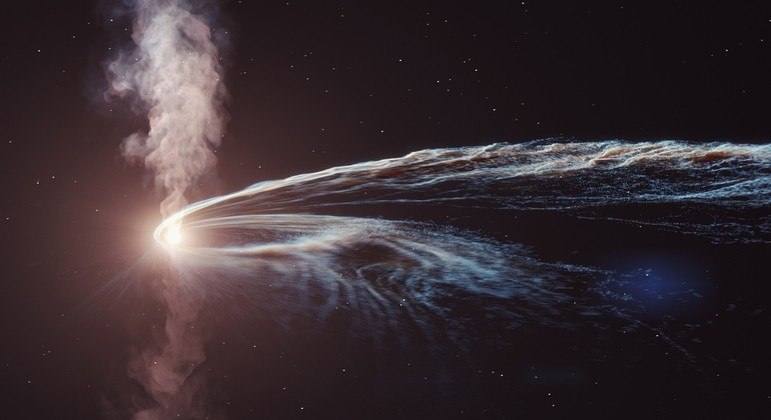 Astronomers have observed a rather gigantic and intriguing phenomenon. A supermassive black hole swallowed a star and ejected it three years later. The event began in October 2018 when a tiny star was torn apart when it passed too close to a black hole located at the center of a galaxy 665 million light-years from Earth.

In 2021, a telescope in New Mexico, USA, captured the same black hole “spewing out” the remnants of a star, emitting a bright flash at half the speed of light.

The reason for the surprise was not the strong destruction of the star and the luminous release of part of its substance, but a three-year period.

“It took us by surprise – no one had ever seen anything like it before,” said Yvette Sendes, a research fellow at the Harvard and Smithsonian Center for Astrophysics and the paper’s lead author. study that analyzed the phenomenonnamed “AT2018hyz event”, and published on the 11th in the magazine Astrophysical journal.

According to a careful analysis by the researchers, who used four ground-based observatories and two in space in the study, the devourer did not ingest any other celestial bodies during this period, which could explain the return of the luminous material.

A supermassive black hole differs from a stellar black hole in that it is usually found in the center of a galaxy and is formed by clusters of millions of stars or colossal clouds of gas that collapse under their own gravity. Their mass is millions and even billions of times greater than the mass of the Sun.

The destruction of a star by a supermassive black hole is a very special event called the “tidal disturbance event.” This happens when a star gets too close to such a black hole and layer upon layer is pulled apart by the hole’s gravity.

During this process, the star’s light becomes a sort of thread stretched around the black hole, in a process called “spaghettification” as it metaphorically resembles a string of noodles wrapped around a fork. This giant filament of light spins and generates a bright flash that is captured by telescopes and observatories.

This process occurs almost at the same time that the black hole “dines” the star, and not three years later, as it happened.

And even stranger, they were some of the most luminous spaghetti ever observed by scientists, and they were moving at about 50% the speed of light, not 10% like the vast majority of such phenomena.

“This is the first time we have seen such a large delay between feeding and going out. The next step is to find out if this actually happens more regularly,” added Edo Berger, professor of astronomy at Harvard University and co-author of the study. the study. in a statement.

The main hypothesis of the event at the moment is this: maybe this delay is more common than you think. This doubt will be resolved only by observing more “meals” by supermassive black holes.

YouTube will provide unique IDs for each channel, choose yours!