Kyiv is under Russian bombing again. The bombings seem far more important than the attacks at the start of the war, according to the BBC.

According to the BBC, Russian President Vladimir Putin has already confirmed the attacks in several places in Ukraine this morning in a video message. Putin promises a “tough” response to any further “terrorist” acts on Russian territory.

The wave of attacks began two days after an explosion damaged the only bridge connecting Russia with occupied Crimea, drawing sharp criticism from Moscow.

At the opening of the Security Council meeting in Moscow, Putin also warned that these attacks would be repeated if Ukraine again strikes targets in Russia.


“The capital is attacked by Russian terrorists!” said Kyiv Mayor Vitali Klitschko, calling the missiles that hit them “critical infrastructure” in the city.


“Unfortunately, there are dead and wounded,” President of Ukraine Volodymyr Zelensky wrote. in a message on the Telegram social network. 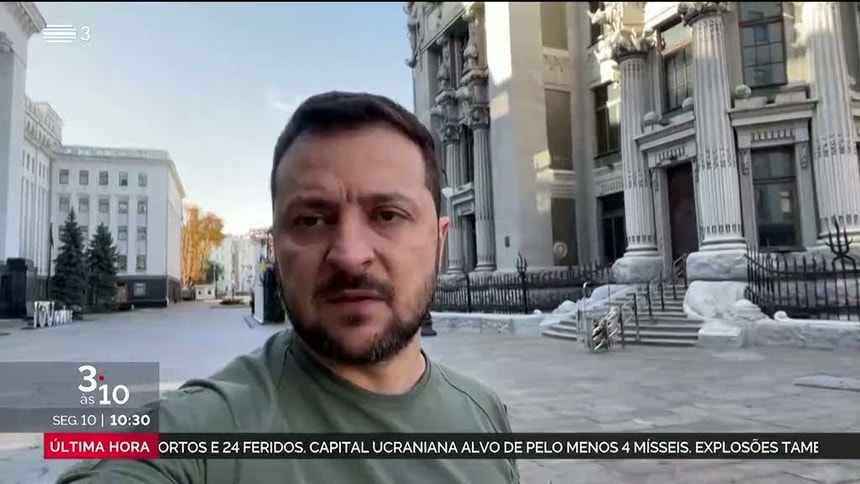 Zelensky adds that the attacks in Ukraine this morning show that Russia is “trying to destroy us and wipe us off the face of the earth.” The President urges the people of Kiev to stay in shelters.


According to the Ukrainian police, as a result of rocket attacks on Kyiv, 11 civilians were killed and 60 people were injured.

After the shelling, six cars caught fire, more than 15 cars were damaged, Rostislav Smirnov said in a publication in facebook.

Smirnov added that 30 employees of the Ministry of Emergency Situations and six rapid response units arrived at the scene in the Shevchenko district of the capital of Ukraine.

Except Kyiv. there are reports of attacks in other Ukrainian cities. Kharkiv, Lvov, Dnipro and Zaporozhye were also fired upon by Russian missiles this morning.

In Kharkiv, the fall of three rockets caused damage to the electricity supply infrastructure.

There are power and water outages in some areas of the city, but Kharkiv Mayor Igor Terekhov has already said that “specialists and public utilities are doing everything possible to restore normal life in the city.”

Zelensky describes: “The morning is difficult. Dealing with terrorists. In a Telegram message, the Ukrainian president says dozens of Iranian Shahid missiles are being used and the main targets are energy distribution infrastructure and people. He claims that the whole country

under attack and raises the alarm for the Kyiv, Khmelnitsky, Lvov and Dnieper, Vinnitsa, Frankivsk, Zaporozhye, Sumy, Kharkov, Zhytormir and Kirovograd regions.


“They want to cause panic and chaos, they want to destroy our energy system. They are hopeless. The second target is people. Such timing and targets were deliberately chosen to inflict as much damage as possible. Stay in shelters today. Always follow the safety rules. And always remember: Ukraine was here before this enemy appeared, Ukraine will hold on to it.”

.@ZelenskyyUa: “#Ukraine never wanted this war. We are dealing with a state that does not want peace.
The world must see the truth. Rocket attack on the civilian population #Zaporozhye destroyed residential buildings, where people spent the night, lived, no one was attacked.” pic.twitter.com/q6lFSb5M1j

Representative of the Ukrainian Air Force Yuriy Ignat said that Russia launched 83 missiles and more than 43 were intercepted by air defense systems.
See also  India warns it is being used to disguise shipments of Russian oil products to the US - Observer

Russia’s attacks demonstrate that it still has the ability to deploy precision-guided weapons on a large scale. Ignat added that the rocket batch included Kalibr, Iskander and Kh-101. All launched from the Caspian and Black Seas.

The European Union describes Russia’s “indiscriminate” attacks on civilians in Ukraine as “war crime“. The European Commission emphasizes that rocket attacks on Kyiv and other cities are “barbarians and cowards.”

German Chancellor Olaf Scholz also confirmed support from Berlin and other G7 countries, a German government spokesman confirmed. According to the German Foreign Ministry, this morning a Russian attack hit the building that houses the German consulate.

British Foreign Secretary James Smart shares the same view and calls Russian attacks on civilian leaders “unacceptable”. “They are a show of weakness [presidente Vladimir] Putin, not by force“, he adds.

Sergey Surovikin. Who is the “Armageddon General” Putin chose to lead the war in Ukraine? – Observer

See also  In France, a woman was arrested for stealing the dead in coffins
Continue Reading

See also  In France, a woman was arrested for stealing the dead in coffins
Continue Reading

The Association for Intensive Care Medicine (DIVI in German acronym) has indicated that the seasonal rise in cases of respiratory syncytial virus (RSV) and the shortage of nurses are causing a “catastrophic situation” in hospitals.

RSV is a common and highly contagious virus that affects almost all babies and children under two years of age, and some of them can become seriously ill.

Experts say easing restrictions put in place to fight the COVID-19 pandemic will lead to more babies and children with RSV, whose immune systems are not ready to fight the virus.

According to the same source, hospital doctors are currently facing very difficult decisions about which sick children to hospitalize due to a lack of available beds.

In some cases, patients with RSV and other serious illnesses are being transferred to hospitals in regions of Germany where there are even fewer resources for intensive care.

The association warned that a recent study identified fewer than a hundred pediatric beds across the country and the situation could get worse.

Sebastian Brenner, head of pediatric intensive care at Dresden University Hospital, told German TV channel N-Tv that the situation could worsen in the coming weeks: “We are seeing this in Switzerland and France,” he added. about the risks of available treatments become even more scarce.

German Health Minister Karl Lauterbach announced today that the government will loosen some rules to ease the transfer of nurses and will allocate another 600 million euros to pediatric hospitals over the next two years.

In November, the European Commission approved the world’s first single-dose drug for the treatment of RSV.