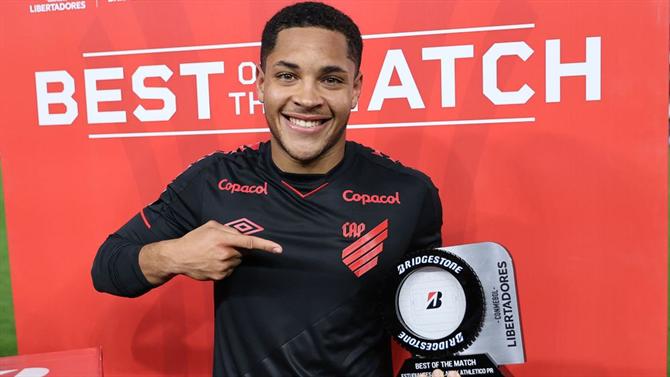 Barcelona are already working on next season and are eyeing another prodigy from Brazil: 17-year-old Vítor Roque, striker for Atlético Paranaense.

The team led by Luis Felipe Scolari is contesting the Copa Libertadores final with Flamengo and Vitor tonight, despite his age and only one season as a professional (contract until 2027) after training in Cruzeiro, ready to make the jump to Europe.

With 13 goals in all competitions, he helped the team reach the final by beating Palmeiras. According to newspaper Mundo Deportivo (which also has an interview with the young player), Barcelona appreciates all his qualities: he is very capable of scoring goals, fast, agile and disciplined, and he is supported by Deco, Barça’s scout in Brazil. .

His idol, however, shone on an opponent who is also interested in this. When asked to compare him to another player, he does not hesitate: “I really like Cristiano Ronaldo. He has been an inspiration for his work since he was a child.”

So, do you prefer Real Madrid for this? “I have no preferences, I like all the big clubs in Europe. Any child playing in Brazil dreams of becoming a big player in Europe. I have to work so that when the opportunity presents itself, I am ready,” he says, ensuring that his release clause at Atlético is “quite” lower than the 300 million he had at Cruzeiro for foreign clubs.

It should be noted that at the age of 17, Vitor was once coached by former coach Wanderlei Luxemburgo, and now he has Scolari. He shared what he had learned from them. “Luxembourg and Felipao are two incredible men that I felt very comfortable with. I have learned a lot from them and will continue to work to learn more. They didn’t like that I played touched [com lesão], always wanted to play. Felipao tells me to calm down, that with work everything comes at the right time.”

Roger Schmidt: “If I had to choose, I would ask Grimaldo to stay longer at Benfica” – Benfica

See also  A BOLA - Caixinha made history with Talleres: "We want more" (Libertadores)

See also  A BOLA - Caixinha made history with Talleres: "We want more" (Libertadores)