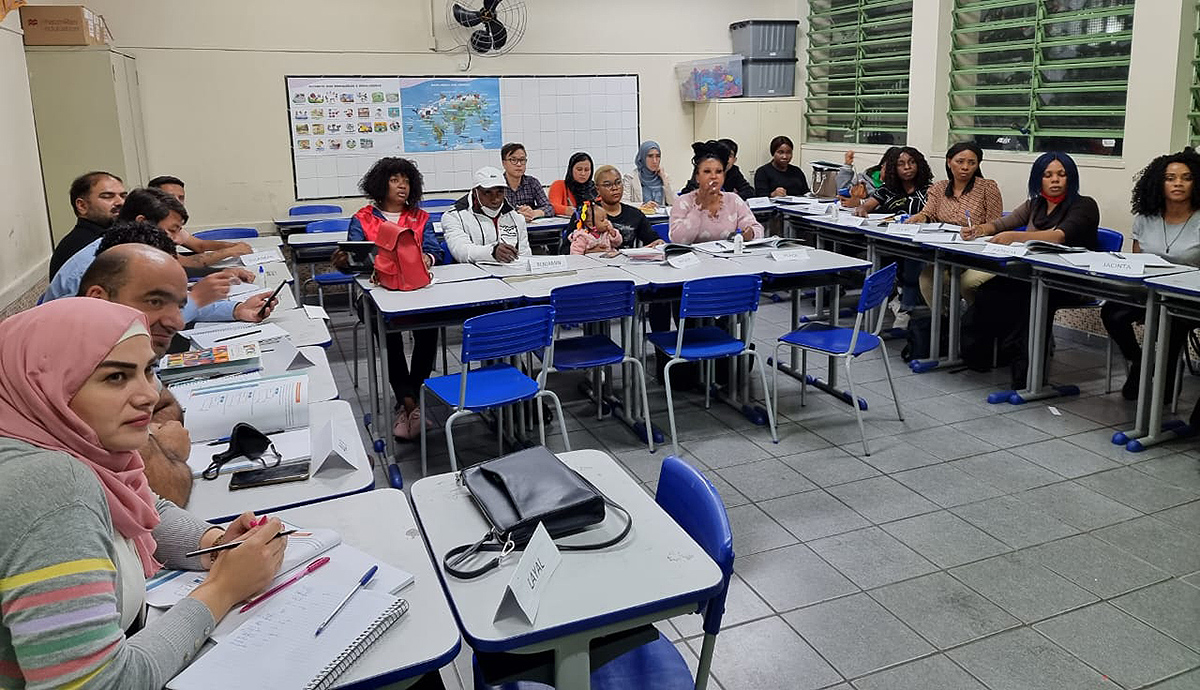 Espaço de Bitita, known as EMEF Infante Dom Henrique, is more than a center for learning Portuguese for foreigners, located in the Caninde district of São Paulo, is a welcoming place where language learning is the gateway to social and professional integration.

In addition to regular classes for children, EMEF opens its doors to face-to-face Portuguese classes for foreigners and the coordination of online language classes. “In distance learning, we have volunteers from other states and other regions of the country, as well as serving students in these conditions,” says school principal and creator of the Portuguese Language for Immigrants project, Claudio Marques da Silva Neto.

The pedagogical method adopted in the project is Portuguese as the Host Language (PLAC), which is designed to teach Portuguese, especially to IDPs who are more vulnerable and for whom Portuguese is not their first language.

For education manager Sulima Pogrebinsky, who is working on the project, the PLAC method aims to ensure the rights of immigrants in the country and has the goal “for them to learn Portuguese not only in a linguistic aspect, but also in context. Language will integrate you into society by creating conditions for work, study and intercultural exchange.”

Currently, 140 students are studying in the project, which was made possible thanks to the work of 25 teachers and 3 volunteer coordinators. The teaching material is provided by Portas Abertas and is supplemented by pedagogical coordinators. The school, in addition to the location, provides meals for students during the break between face-to-face classes.

The project was born from difficulties

In 2014, the school welcomed its first group of Syrian students and the difficulty of teaching Portuguese to native Arabic speakers was astounding. But as the children progressed and began to understand the language, the family still did not know the language. “Therefore, we decided to create the Portuguese Project for Immigrants, which took place in March 2015 with the help of volunteer teachers,” comments Claudio. Thus, the school began to teach Portuguese to adults in the family.

The project was backed by a partnership with the federal government through the National Program for Access to Technical Education and Employment (PRONATEC), but this partnership will only last until the next change of government.

In 2017, without federal support, the mayor’s office allocated only two paid teachers and specialists from the state network to conduct additional classes with foreigners. However, low wages and overwork discouraged the teachers, and the project continued only with the support of volunteers.

Brazil: the path of immigrants

Most foreigners who have settled here consider Brazil a hospitable country. It is a member country of the International Organization for Migration (IOM), the main intergovernmental body in the field of immigration.

Over the past decade, the number of immigrants living in the country has increased by 24.4%, and according to the Observatory for International Migration (OBMigra), today there are about 1.3 million people who have adopted Brazil as their second homeland.

Of these, the UNHCR (Office of the United Nations High Commissioner for Refugees) in Brazil recognizes 60,011 as refugees, i.e. people who had to leave their country due to fear caused by conflicts or persecution that put their lives at risk.

These are refugees from 117 different countries, but the largest flow comes from Venezuelans (48,789), Syrians (3,667), Congolese (1,448) and Angolans (1,363). A new stream has been observed recently after the Taliban came to power in Afghanistan, which is one of the natives of this country, who arrive in Brazil in large numbers every day.

And since the arrival of new groups does not stop, the registration for the Portuguese course in Espaço de Bitita continues, and every month a new group is opened for the introduction to the Portuguese language.

How to take part?

Those interested in learning Portuguese can apply through the application form, which can be accessed at the following link: https://forms.office.com/r/mX4AFW6WTf

Anyone who wants to collaborate by teaching classes or providing pedagogical support can send an email to: [email protected].

Bitita is the childhood nickname of the writer Caroline de Jesus, who lived in a favela near the school. Her work is widely distributed at EMEF, and her book “Quarto de Espejo” is one of the most famous among students and describes events from the painful life of the protagonist and her struggle for a decent life and leave the favela.

Since the Kaninde area is the backdrop of the book, a close relationship has developed between the school’s students and the work. For this reason, when the school held a student vote to change the name of EMEF from Infante Dom Henrique to something else, the name Espaço de Bitita won with 40% of the vote.

Although the name change process has not yet been approved by the mayor’s office, students and teachers have already unofficially adopted a place name for Espaço de Bitita, which they consider to be more representative and inclusive.