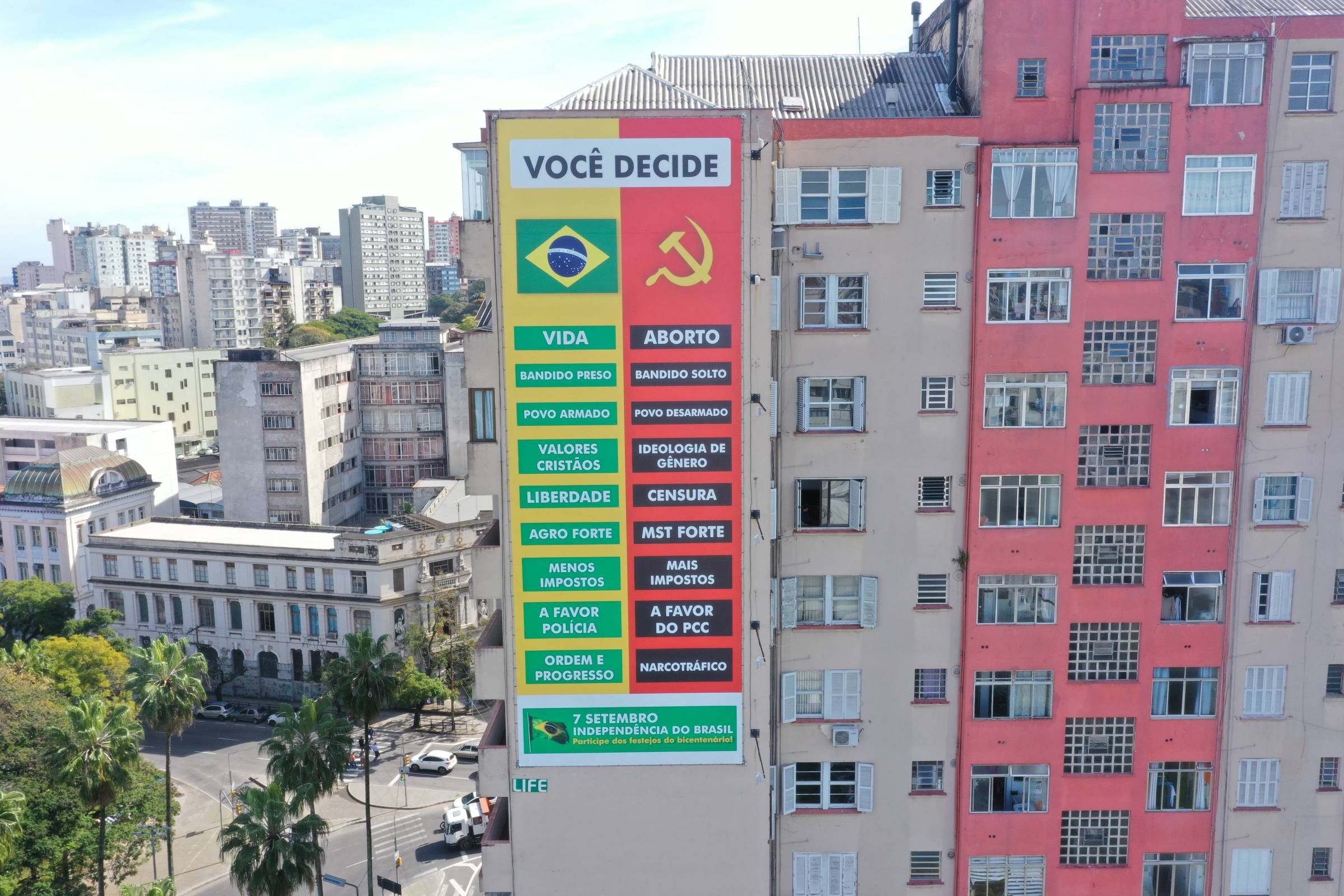 Panel?
It is absolutely ridiculous that an advertising agency should accept this role (“Giant panel on September 7 in Porto Alegre associates the left with criminals and the CCP,” Politika, 13/8). Even more ridiculous is that the building manager authorized the broadcast. In any case, even if the panel is removed, the author’s goal is achieved: a message on computer screens all over Brazil.

There are no lies in this panel.

The route is wrong. It’s about life, but celebrates death. He is in favor of the police, but allows the PCC to buy guns legally and cheaply. PCC no longer need to trade weapons, just buy them from the store. He’s all for order, but he’s already had a drug dealing scandal in Spain on the presidential plane. He is for freedom, but likes to censor, telling journalists to shut up.

Letter, Acts and Ze Pequeno
It’s funny to see Bolsonarist’s reasoning (“Bolsonaro compares a pro-democracy act to a letter against drugs signed by Zé Pequeno”, “Politics”). They call themselves Democrats and want to end the STF. They say they are defending democracy, but if they don’t win the election, they won’t accept it. They declare themselves democrats, but call for the liquidation of opposing parties and the arrest of rivals. They talk about democracy but call for a military government and the closure of Congress. And his “myth” ridicules action for democracy. It would be comical if not tragic.

In a country of 220 million people, wanting to impose on people the idea that a pamphlet written by old jerks and signed by just under a million people (most of whom don’t even know what it’s about) represents the mindset of the majority calling Brazilians idiots. Besides, stop this democratic rule of law business, that’s more like a Casas Bahia slogan.

When the gods want to destroy someone, they begin by depriving him of his mind. Bolsonaro is on the verge of a nervous breakdown, in despair.

If Bolsonaro bothers to comment, it is only because he fears the consequences.

As a USP Law School graduate and former 11 de Agosto academic, I support the “ipsis litteris” manifestations in the arcades. There is no doubt that they sought to defend democracy. I was born during the Vargas dictatorship, I lived in a period of so-called freedom between 1945 and 1964, always with coup demonstrations, until 1961, when Janio Cuadros resigned, when I served the country in the army, and I have no doubt that those in power trying to ignore the Constitution.

writer stabbed to death
With a lack of education (the widest!) religious fanaticism persists (“Salman Rushdie must have lost an eye and got shot in the arm and liver,” agent says, Illustrated, 8/13)!

You can’t always live in a security bubble. In this case, she clearly relaxed. The killer even introduced himself by name: Hadi Matar.

Sanitation
Those who believe in the minimum state are mistaken, this figuration only works for rich and small countries (“Sanitary PPP should reach a record in 2022, two years after the adoption of the new legal framework”, Mercado, 13/8). Brazil still needs strong government intervention to allocate large resources to health care and education. There will be no private initiative that will eliminate inequality and ensure social development! The private conceives profit in terms of capital, while the state conceives it in terms of the public, in the citizen. PPP according to this model of Minister Guedes only increases inequality and poverty.

marvelous, Sheet spreading a good deed by the current government! And without the opposing “but” in the middle of the news.

The Pain of a Refugee
I can’t even imagine the feeling of emptiness and innocence of this girl in a country with a different culture, language and customs from her own, in addition to the immense nostalgia she must feel for her family (“I decided to kill myself if I was kidnapped by the Taliban – says an Afghan refugee photographer in SP, Mir, 8/13) But on the other hand, it’s good that you were accepted in Brazil, maybe you can rethink and redo your life and projects.

Religious people generally condemn suicide. Any suffering in the so-called spiritual world should not be worse than the situation of a woman who fell under the influence of the Taliban.

Variola and Ira
Severe violence perpetrated against monkeys by stoning and poisoning them because of the association of the name “monkey pox” with the disease, as happened in 2019 with the yellow fever outbreak in J., requires concerted action by the press to help spread the right message. information and help protect these animals. Society is very cruel and aggression towards animals is nothing but an expression of this violence, using misinformation as an excuse for fear of illness.

Abandoned house woman
If Queiroz, who always appeared at barbecues and meetings, was not found, imagine this woman who lived underground (“Brazilian justice investigated Margarida Bonetti for 5 years, but never found her”, Daily Life, 8/13).

Crime is prescribed and media scoop is rampant. To arouse popular hatred for someone who at the moment owes nothing to anyone or to Justice (I repeat, a crime is prescribed) indicates a deplorable use of journalism for sensational purposes. Leave the old woman with her problems.

Joao Leao will become the political godfather of a musician known behind the scenes in Bahia.

See also  Ibovespa falls by 2.75% and returns to 107 thousand points; the political scenario and dismissals in the Ministry of Economy are not far off