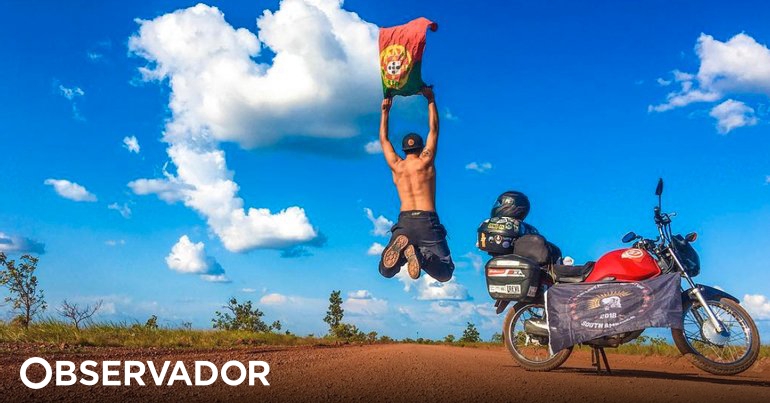 The young Portuguese, who has been traveling the world on a mini-motorcycle since 2020, will arrive in Timor-Leste on Monday and meet with the country’s president, the motorcyclist said on Wednesday.

With a residence in Oliveira de Azemeis, in the Aveiro region, and starting his journey in Avis, in Portalegre, André Souza left Portugal on July 12, 2020 to try for a world record, and since then he has driven over 55,000 kilometers through 40 countries, always on a Honda Monkey 125 with nine horses and a height of 70 centimeters.

The 26-year-old is currently based in Darwin, Australia, and it was there that he met two United Nations lawyers who, after working for several years in Timor and personal with Jose Ramos Hortarecognized in the Portuguese trip the type of gamble that would have interested the current president of Timor, the 1996 Nobel Peace Prize laureate.

This friendly couple took care of everything, connected us, and now it was agreed with Ramos Horta’s adviser that I would meet with the president on August 23, although without a motorcycle, which leaves Australia only by boat on the 24th and will not be. arrive on time to appear in the photo,” says Andre Souza Luce from Darwin.

The absence of a car at an official meeting does not prevent the motorcyclist from admitting with satisfaction: “Once I realized that I could drive Timor, it became a dream. I wanted to get to know the country that was a former Portuguese colony, and especially I wanted to get to know Ramos Horta for everything he did for the independence of this land.”

Initiallypassage through Timor was not planned in the Ride That Monkey project, but became part of the scenario when the direction of the trip had to be changed to get around the fact that in mid-2020 most international borders were still closed or severe mobility restrictions were imposed due to Covid-19.

The idea was to go directly from Europe to Asia, but I had to change the direction of travel and start from America. That is why now, being in Australia and so close to Timor, I decided to go there and through Indonesia before heading to Malaysia and Thailand, ”explains the Portuguese.

Myanmar, India, Pakistan, Iran, Turkey and “some countries in North Africa” ​​are the next destinations, so travel effectively cross “all the continents of the globe” before returning to Portugal scheduled for May or June 2023.

Meanwhile in Darwin, Andre Sousa continues to recover from injuries sustained in his back after he was hit by a truck in California, USA, which left him there for two months. The problem was alleviated with physical therapy and required regular medication, but the pain worsened in Australia after several days of consecutive desert crossings between Cairns and Darwin, covering a total of 2,500 kilometers.

A young Portuguese man traveling the world on a mini-motorcycle is injured in the US.

I had to lie in bed for a week, completely motionless, and now I am accompanied by a chiropractor who has already offered me three consultations for $ 110 each as support for the project,” emphasizes Andre Souza.

The motorcyclist also notes that the trip turned out to be “much more expensive than expected”, due to the difficulties associated with the pandemic and unforeseen health problems. The accident in the United States, for example, involved two months of commercial residence in the Beverly Hills area, where “the simplest hamburger cost at least 10 euros” and, just to transport a motorcycle and driver from Santiago de Chile to Sydney, “the cost was 6000”, in addition to the cost of “a number of documents” that the Australian authorities require when crossing from Darwin to Timor.

Facing these and other budget changes was only possible thanks to the sponsors of the project and the “donations and support of many different people from all over the world” – as in the case of a Portuguese family that this week welcomes André Sousa to Darwin and 40 subscribers from different countries who donated 50 or 100 euros in exchange for having their name engraved on the minimoto’s fuel tank.

In the next stages of the journey through Asia and Africa, “there will be even more bureaucracy”, but in order to reduce the cost of accommodation and food, the young man will strive to circulate through areas where Portuguese emigrants live what they can get. André Sousa admits that he was welcomed mostly by foreigners, but he does not hide his preference: “I always like to stay with the Portuguese. They do everything they can to help me and make my life easier, and when we’re together, it’s like coming home for a while.”