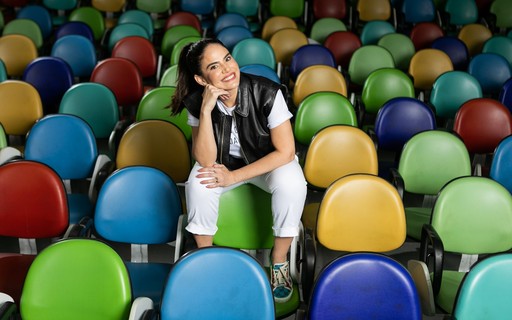 A literary course called Fernanda Pessoa may even seem purposeful – as a tribute to the famous Portuguese poet. But in fact it takes the name of the teacher and the founder. As of 2021, the course based in Recife, Pernambuco also offers all the subjects included in the course vestibular and currently has 15,000 students – 10,000 of them online. The company is expected to earn 16 million reais this year.

Despite having almost the same name as the poet, Pessoa, now 41, entered literature almost by accident. Her first career choice was medicine, but after becoming pregnant at 15, she realized that it would be difficult for her to leave her hometown of Arcoverde, Pernambuco, for the study. One of the courses available near her home was a degree in writing, and she decided to enroll there after graduating from high school.

With no money to pay for tuition, Pessoa closed a deal to sell college snacks and also began work in schools and give private lessons. In 1998 he moved to Recife, where he continued his studies and trade in sweets.

However, she was not satisfied with the method of teaching literature. “I was always very worried about the way the classes were run, with an outdated general curriculum,” he says. “I did not consider it useful to ask a teenager to write a poem without being a poet, without having a critical flair.”

With her modern ideas, she created problems in the schools where she worked, and was eventually fired from several of them. It was then that she decided to rent a room at the back of the butcher’s shop to teach literature in a way that she considered most effective for the entrance exam. The first class was in 2000, when 10 out of 13 of his students passed the entrance exam. The following year, the students themselves began to advertise their work.

Pessoa says his standout feature was offering a different and cheaper rate than competitors. “My students were people who couldn’t afford large entrance exam courses,” he says. In 2005, the entrepreneur already had 500 students in 12 classes.

Shortly thereafter, she offered a job teaching one of the largest pre-university entrance exams in Recife. “The course owner liked the idea because many students complained about the Portuguese lessons,” he says. It worked, and the following year she joined the company as a partner. However, sharing a society with three other people, it was difficult for her to realize her beliefs – from the design of the premises to the content of the classes. He left in 2009 with the idea of ​​creating his own course and BRL 5,000 in his pocket, a small amount he received after a difficult process of dismissal.

A year earlier, he created Redação Colorida, a writing method that became one of his biggest successes. “It looks like something primary. But we started coloring parts of the newsroom in order to understand what is necessary to have in each of them. For example, the introduction should have a context in which to use the previous piece of knowledge,” he explains.

Flying solo, he had former students who failed the entrance exam that year and got in. The course started with 1500 students in ten classes. He spent the first capital to renovate the premises, which did not even have a working bathroom, and it did not stop growing.

In 2018, she decided to implement an online course on the advice of her husband. “At the beginning, I was against it because I liked face-to-face classes. The studio was ready, but I still didn’t have the courage to teach,” he says. Virtual classes have proved fundamental, especially during the pandemic, as face-to-face courses had to be suspended until September 2021.

Now the idea is to invest in virtuality where more people can be reached and there are no space restrictions. The goal is to recruit 50,000 students in less than a year. To do this, in her opinion, it is also necessary to reduce the number of face-to-face classes over the next five years. “I understand that I will need to reduce my workload, also due to my fatigue from over 20 years of teaching,” he says. “But it’s not something that I can put into practice right now, since face to face is my first love, and I am in the stage of falling in love with the virtual.”

See also  Porto are trying to recover in the Portuguese championship against Gil Vicente.
Related Topics:
Up Next

Makhachev teases? From the Bronx? with message in Portuguese and forecast title – 11.08.2022

See also  Francisco Lufinha alone will cross the 6,700 kilometers of the Atlantic Ocean.

See also  Porto are trying to recover in the Portuguese championship against Gil Vicente.