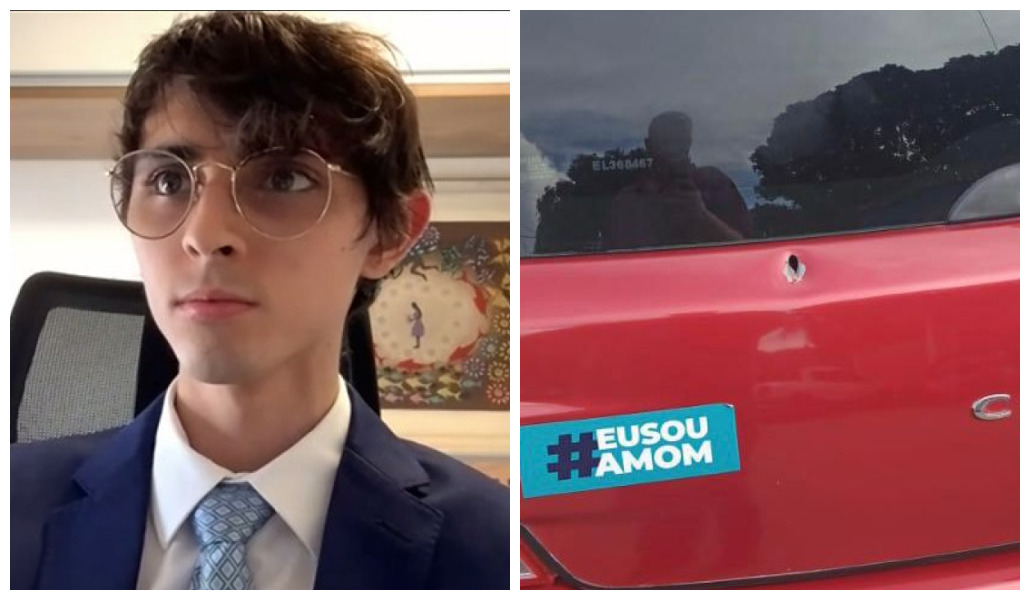 Manaus (AM) – Councilor Amom Mandel (citizenship) spoke this Thursday (4) about the attack his team suffered after checking public transport in the Cidade de Deus area, Manaus east zone. The case attracted attention as it could be a political offense against a highly popular candidate for federal deputy.

The attack took place on Tuesday evening (2), around 19:00. Ammon’s team investigated complaints of misuse of public transport by residents of the region.

As the group was moving along Nossa Senhora da Conceicao Avenue, a couple on a motorcycle drove up to the car and fired three shots in the direction of the car. The bullet hit the back of the car, which had a sticker with the name of a city council member on it.

According to the press service of the parliament, even during the attack, the criminals shouted “Amon, not here” and disappeared. The names of the perpetrators of the crime have not been established.

At a press conference held this Thursday (4), the adviser said that he had already received threats, but not on such a scale, with the presence of firearms. He also said that he was waiting for an investigation by law enforcement agencies to identify the perpetrators.

“I have even informed the Manaus City Council about the threats I am facing. However, this is the first time this has happened with firearms. Three shots were fired in the direction, one of them hit the red car,”

The bulletin about the incident was compiled on the same day as the attack, the adviser said, and he asked the authorities to keep it confidential so that information about the case would not be made public. However, there was a “leakage” of information about the crime. In this regard, he called for an investigation into the lack of protection of sensitive data.

The council member also said he received a call this morning from Gov. Wilson Lima. In the conversation, Wilson showed solidarity and said he would take the necessary action.

“I received a call from Gov. Wilson Lima in solidarity with the possible attack and he said he would take the necessary action. We want the safety of our team and our fans. This is a serious matter that worries me and which should not be on the agenda of the elections. Unfortunately, violence occurs and is likely to occur during the process, not only with me, but also with other candidates.”

When asked about possible motives for the crime, the adviser did not confirm whether the attack could be qualified as a political crime and that the police should confirm the results of the investigation.

“Although there is no what we call a political crime in the Criminal Code, it could have been committed for political reasons, but only the Secretariat of Public Security and the Civil Police can say this after an investigation. I also have another bulletin registered in the case of threats against me, which I already spoke about on the podium of the Municipality of Manaus”,

Similarly, political scientist Carlos Santiago also stated that it was too early to classify the attack as a political crime. Santiago emphasized that depending on the motivation of the crime, the electoral justice and other institutions must act and stop this type of violence.

“There are still no grounds for the police to say that this fact is a political crime. But whether they are political or not, it is essential that the Electoral Justice, the Electoral Public Ministry and the Amazonas State Public Security Service provide security, bring peace to the elections, and be able to provide answers to this case. Manaus can no longer live in an atmosphere of terror where even those who want to campaign politically are subjected to violence.”

According to Deputy Organized Crime Department (DRCO) Delegate Rodrigo Azevedo, victims will be heard to provide clarification on the case. At the moment, investigative actions are being carried out to identify and arrest those responsible for the shooting.

The Instituto Eficaz poll released on Tuesday (2) shows some candidates with a high percentage, such as Amom Mandel (citizenship) for a federal deputy.

Councilor Ammon Mandel is in first place, with about 27% of the electorate’s intentions, according to an incentivized poll of intent to vote for a federal deputy.

The percentage is significant, and he quickly puts the young politician, announced on April 30 as a candidate for deputies of the federal federation PSDB-Citizenship, ahead of his competitors.

There are politicians, publicists and businessmen at Bolsonaro’s headquarters