Senator Fabiano Contarato (from PT), author of the law that expanded and established a national level for nurses – a project that was approved by Congress and sanctioned by Bolsonaro – took to social media to defend the paternity of the norm. According to him, Bolsonaro will use this issue for political gain.

“Bolsonaro is trying to claim the glory of the sanction, but he “forgets” to say that he vetoed the INPC fix. In practice, there will be no annual salary adjustment for nurses. We wish you complete victory! Let’s fight to override the veto,” Contarato tweeted.

In another post, in a video, he said: “I am the author of PL 2564, which establishes a minimum wage (for nursing). I came here to warn you: don’t be fooled by President Bolsonaro. He authorized PL 2564 only because he knew that if he vetoed it, we would override the veto. I want to remind you that all 81 senators voted for the 2564 PL, and out of 513 federal deputies, only 12 voted against, including the son of the President of the Republic (Eduardo Bolsonaro).”

Posts linking Bolsonaro to the project are circulating on social media and discussion groups, mostly from Bolsonarists, with no attribution from Contarato.

Civil society organizations such as Transparência Capixaba, Convergência Democrática, Sindijournalist, Adufes, Sintufes, DCE of Ufes and others are participating this Thursday (11) in an impartial civic action with the reading of the Letter to the Brazilians in Defense of Democracy. . The letter calls for the protection of a democratic rule of law and respect for the election results.

The action will take place on the stairs of Teatro da Ufes and is scheduled for 16:00. The same event must occur simultaneously in other states. In São Paulo, the action will take place at USP Law School, where the letter was written. Outside the college, in Largo de San Francisco, screens will be set up for those who wish to follow them. The signatories of the 1977 letter to the Brazilians will also be present, in addition to representatives of organizations supporting the letter, which has already collected more than 830,000 signatures. 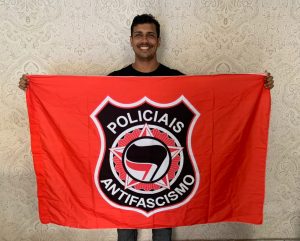 Curzone is the coordinator of the anti-fascist police group in the state, and on the group’s Instagram would be critical of public safety in general, defending the principles the group believes in. The group would also post a note in solidarity with government candidate Captain Souza (PSTU), who is also an anti-fascist police officer and the subject of an investigation by the Corporation.

The decision was taken after the Military Prosecutor’s Office filed a motion to open a criminal case for an unexcused reason, which could lead to criminal prosecution. “Based on the foregoing, I satisfy the request of the Military Prosecutor’s Office and determine the introduction of these, upon dismissal and other precautionary measures, including the disposal of weapons and items, in the form of relevant legislation,” the excerpt from the court decision says.

“Harder than a Candidate”

Senator Rose de Freitas (MDB) still has interim deputies on the slate for re-election. He argues that it is difficult to accommodate permanent substitutes. “It’s harder to include an alternative than it is to list a candidate,” the senator, who is president of the MDB in Espírito Santo, told Colone.

Former Chairman of the Vitoria House of Councilors Vinicius Simões (Citizenship) withdrew from the elections to the Federal House. His name no longer appears on the PSDB-citizenship federation protocol, which was submitted to the Electoral Court. He will coordinate in the capital the campaign for the re-election of State Deputy Fabrizio Gandini (Citizenship).

“After evaluating the entire current political scenario, especially the local scenario, and talking to our political group, my family and I decided to shelve this project and step back,” Simones said. He also said he wanted to focus his performance on Vitoria. Simões is the First Deputy for Citizenship in the Chamber of Deputies. If one of the councilors of your party is elected as a deputy, he becomes an adviser.

Violence against women in debate

According to the Minister of Security (Sesp), from January to July of this year, 52 women were killed, of which 18 (35%) by femicide – 5 of these crimes in the Capital Region, 4 in the North. , 2 in the south, 4 in the northwest and 3 in the mountainous region.

See also  Who is Paulo Dantas elected governor of Alagoas to exercise the buffer mandate | Election 2022 in Alagoas
Related Topics:
Up Next

Yes, we should talk about politics with our young children.

Biden forgot he greeted the politician and starred in a gaffe