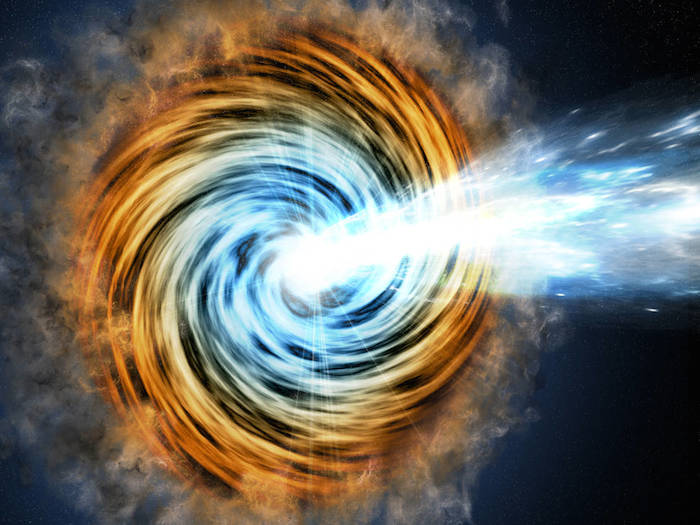 These particles come from outer space and have traveled billions of light years. However, where do they come from? What is shooting them across the universe with such tremendous force? These questions have been among the most difficult problems in astrophysics for over a century.

An international research group led by the University of Würzburg and University of Geneva (UNIGE), sheds light on one aspect of this mystery: it is believed that neutrinos are born in blazars Galactic cores are powered by supermassive black holes.

In 2017, Sara Buson and other researchers suggested that the blazar TXS 0506+056 could be a potential source of neutrinos.

This study sparked scientific debate about whether there really is a connection between blazars and high-energy neutrinos.

With this first step, Buson’s team received funding from the European Research Council to launch an ambitious research project in June 2021. Technical Researcher.

It is necessary to analyze numerous signals (or “messengers”, for example, neutrinos) from the Universe. The main goal is to understand the origin of astrophysical neutrinos, confirming whether blazars are indeed the first highly reliable source. high-energy extragalactic neutrinos.

Now the project has achieved its first success. Scientists have confirmed that blazars can be confidently associated with astrophysical neutrinos with an unprecedented degree of confidence, according to a new study. published no American Astronomical Society,

“The process of accretion and the rotation of a black hole lead to the formation of relativistic jets, where particles are accelerated and emit radiation up to a thousand trillion energies of visible light. The discovery of a link between these objects and cosmic rays could be The “Rosetta Stone” of astrophysicists high energy,” said Andrea Tramacere from the University of Geneva.

Scientists used neutrino data from the IceCube neutrino observatory in Antarctica and BZCat, one of the most accurate catalogs of blazars.

Using this data, they had to prove that the blazars, whose position in the direction coincides with the position of the neutrino, did not appear by chance.

So, developed software is able to estimate how similar the distributions of these objects in the sky are.

“After we rolled the dice a few times, we found that a random association can only outperform a true association once in a million trials. This is strong evidence that our associations are correct,” emphasizes Tramacere.

Despite the results of the study, the research team believes that the number of results in this initial sample just the tip of the iceberg.

Through their efforts, they have collected “new observational data,” a key ingredient in building more accurate models of astrophysical accelerators.

“What we need to do now is understand the basic difference between objects that emit neutrinos and those that do not. This will help us understand how much the environment and the accelerator “talk” to each other,” the team emphasizes.

“Then we can abandon some models, improve the predictive power of others, and finally add more pieces to the eternal puzzle from the acceleration of cosmic rays,” the researchers concluded.

See also  Goodbye artificial intelligence. Instagram will once again have a feed in chronological order
Related Topics:
Up Next

Microsoft Viva gets Stories support and some news

Stray | Requirements to play on PC