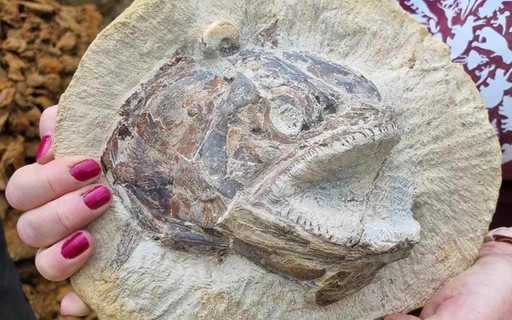 A remarkable new Jurassic excavation near Stroud in Gloucestershire, UK, has unearthed a ferocious-looking fossil fish.

The creature, a tuna-like predator named Pachycormus, is perfectly preserved in three dimensions.

With his big teeth and eyes, he looks like he’s about to launch an attack.

The specimen was identified by fossil hunters Neville and Sally Hollingworth.

“It was a real surprise because when you find fossils, most of the time they are flattened by time,” Neville tells BBC News.

“However, it was surprising to find it, because we realized that the skull had not been crushed.”

“The mouth of the fish is open – and it looks like it is about to come out of the rock towards you.”

The couple found the fish head in a pasture behind a stable in the village of Kings Stanley.

It was enclosed in one of many limestone concretions that formed a layer of exposed clay.

Landowner Adam Knight had no idea his cattle were grazing on a rich bed of 183 million-year-old fossils. At that time, this place was under warm tropical waters.

Knight allowed Neville and Sally, along with a team led by the University of Manchester in England, to continue exploring the site.

An excavator was brought in to extract hundreds of nodules, which were carefully opened to see what they contained.

At the end of the excavation, more fish, squid, and even the bones of two ichthyosaurs, marine reptiles that resemble today’s dolphins but are larger, were found.

“The whole food chain is in this place,” said paleontologist Dean Lomax from the University of Manchester.

“This pachyfood would probably eat smaller fish and squid.”

“And ichthyosaurs will hunt for pachycormus.”

Interestingly, for the marine life scenario, pieces of petrified wood and insects were also found in the clay layer, indicating that land was not far from this body of water.

The results are likely to keep researchers busy for years to come.

And the interest is great, because the samples belong to a special period of the early Jurassic – Toarcian.

This is a period known for the exceptional preservation of specimens, including soft tissue, and the team even found a fish with the contents of its stomach visible.

“The last discovery like this was made at the so-called Strawberry Bank Lagerstätte in Somerset in the 1800s,” Sally estimates.

Hollingworths are known for their extraordinary ability to find fossil sites.

They recently discovered the remains of mammoths in the Cotswold Water Park – the investigation became a BBC documentary.

They also became famous for discovering thousands of fossilized echinoderms—starfish, sea urchins, and brittle stars—in a quarry north of the site.

“These sites show that there are still many important fossil discoveries to be made in the UK,” says Lomax.

The intention is to hold a public exhibition of the fossils in the UK from October.