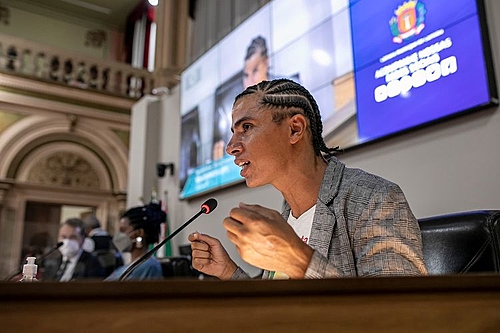 The Court of Parana (TJ-PR) has lifted an injunction that suspended the appeal hearing of PT’s adviser Renato Freitas in Curitiba. Having made the decision, the city council of the capital of Parana has already convened a special session on Tuesday (21) and Wednesday (22) at 15:30.

The injunction to suspend the meeting was upheld.on the 14th, after the Freitas defense challenged conclusion of the investigation about a racist email sent by PT allegedly to the official address of Councilor Sydney Toaldo (Patriotas), rapporteur of the Ethical Disciplinary Process against Freitas. In accordance with the determination of TJ-PR, the Chamber of Curitiba sent documents to the Court confirming the conclusion of the investigation.

“It is confirmed that the investigation has concluded that, although the email was received by council member Renato Freitas, the header could have been spoofed, naming council member Sidney Toaldo as the sender, with an imitation of sending through the city council email structure. and also that the IP address of the message will show origin on an external server located in the Czech Republic, without any signs of infringement,” reads part of the decision.

The Accounts Chamber has already convened a cassation meeting

By decision of the Court of Parana, the mayor of Curitiba, Tico Kuzma (PROS), issued this Monday (20) a subpoena to the members of the council for a special meeting on the ethical disciplinary process of Freitas.

The document states that the meeting will take place on Tuesday (21) and Wednesday (22) at 15:30. The subpoena must be sent to the councilors at least 24 hours before the meeting. However, adviser Renato Freitas’ office said it did not receive the summons until 15:30 this Monday (20).

Renat Freitas is being sued for violating parliamentary decorum in the Chamber of Curitiba, accusing him of demonstrating in front of and inside the church of Rosario dos Pretos in central Curitiba in February.

On this occasion, Freitas and other anti-racist protesters entered the religious temple. He was accused of violating and interrupting the practice of worship, holding a political action inside the church and unauthorized entry into a Catholic church.

After the Council of Ethics of the House of Curitiba recommended that the mandate be removed, Freitas turned to the judge. On May 19, an injunction suspended the meeting at which the trial was to be voted on.

The decision is in line with Freitas’ defense claim, which alleges a breach of due process due to the partiality of members of the Chamber’s Ethics Board.

According to TJ-PR’s decision, voting will initially be suspended pending an investigation to determine the authorship and credibility of an e-mail containing racist slurs sent to Sidney’s case rapporteur’s official address. Toaldo, Freitas.

The message sent to Freitas “indicates the Rapporteur’s bias and interest, and also contains racist slurs, circumstances that, if confirmed, could lead to the Rapporteur’s removal and procedural invalidity,” the excerpt from the document says.