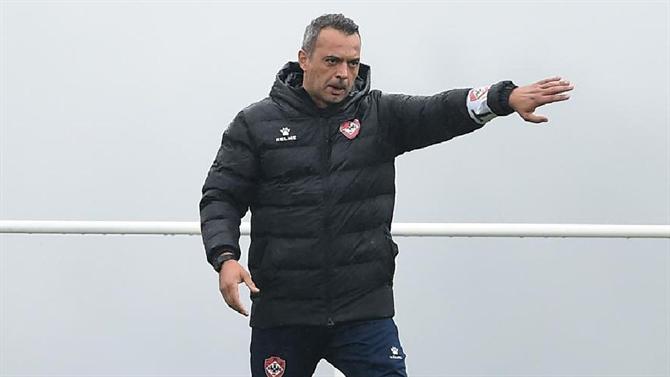 Fabio Pereira made a preview of the game against Torrense this Friday (Saturday, 6 pm) for the Ligue 3 final. The Oliveirense manager made no secret of his happiness that the match will take place at the Estadio Nacional. .

“Playing in this stadium has always been the dream of every player and every coach. It is true that this is not a Copa del Portugal final, but this is the first Ligue 3 final and we are here on our own merit. It’s a dream come true to be on the bench in this stadium,” he explained, recalling one of the moments spent on this stage: “The main memory is the game that I used to play for the under-15 team. Portuguese Cup final between Sporting CP and Porto [1993/94]. I hope to get another moment of happiness here.”

In the match against Torrense, Fabio Pereira made no secret of his desire to win the trophy.

“Winning has always been our goal, and we are aware of the responsibility of the game. It seems to me that favoritism is 50/50, but we had a very good season and we want to finish it on a grand scale. We’ve been very consistent, we haven’t lost a single game in the last 10 games and we want to keep the matrix of our game. This series is very good, this is a different game, the final,” he shot.

Finally, Fabio Pereira summed up the season and turned his attention to Ligue 2.

“We started very well, we were the first team to win Ligue 3, we managed to reach the goal that everyone had to collect, so the season was a huge success. As for the future, Ligue 2 will bring different challenges, this one has been extremely competitive, but we will have other challenges and we will be here to try to solve them.”

Gaitan and Pasush’s gesture that he does not forget: “When I got that hit in the game against Sporting…” – P. Ferreira

The tax authorities demand $4.5 million from Fernando Santos. FPF comes to the defense of the national coach – Atualidade