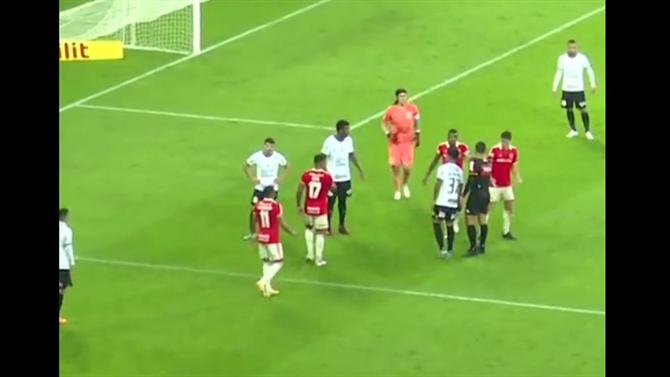 Portuguese defender Ramos from Corinthians was arrested last night in Porto Alegre, where the club met Internacional, following allegations of racism by player Edenilson, who filed a police complaint while still at the stadium. The player was detained on the spot to testify and released on bail of 10,000 reais, about 1,900 euros.

The confusion happened 15 minutes before the end of the game, when Edenilson had a disagreement with the Portuguese, and he went to the referee – the match was stopped for four minutes, accusing Rafael of calling him a “monkey”; the Portuguese defended that he only exclaimed “fuck you, damn it,” a defense he maintained even after his arrest, stating a misunderstanding.

The exact moment when Edenilson calls the referee to report racist insults from Rafael Ramos of Corinthians. The steering wheel of the Internacional was shaking violently. The match was stopped for about five minutes. pic.twitter.com/oZTOxrCnTq

“Rafael Ramos was detained at the scene of the crime for racial slurs. He denies these insults, claiming that it was a misunderstanding because he is Portuguese, about which he used a different expression. He paid bail and was released to leave with the Corinthians. The judge was not present, but was warned and included in the report. The player will be free to react to the process and the case will be investigated with more witnesses or lip reading. He was arrested because he committed a crime subject to bail. If he hadn’t posted bail, he could have gone to jail,” delegate Carlo Butarelli said at the stadium.

Edenilson is sure of what he heard and decided to act. This is your truth and it deserves respect.

Rafael Ramos said he did not say what Edenilson understood. And, until proven otherwise, your version also deserves to be heard ??pic.twitter.com/TCD6HeP6dT

Later on Instagram, the player returned to his defense. “There are very few things in our lives that we are absolutely sure of. This is one of them. I was not, am not and never will be a racist. Thank God, I was brought up with the full realization that we are all equal in this life, with the same rights and the same responsibilities. So, with that confidence, I went to explain myself to my professional colleague. I have always focused on the correct posture throughout my career, and it cannot be otherwise now. This case served to raise the issue again. And we can all confirm this: no racism!”

See also  J.C. Penney will get extra time from lenders in push for survival

Match referee Braulio Machado also testified and recounted the incident in his report. The judge’s report, cited by Globoesporte, reported Edenilson’s indictment and Rafael Ramos’s assertion, but according to the document, no member of the arbitration team was able to hear what happened.

“At the 31st minute of the 2nd half, at the moment when the match was stopped, I was informed by the number 8 player of the SC International team, Mr. Black. Edenilson Andrade dos Santos, that his opponent No. 21 Mr. Rafael Antonio Figueiredo Ramos uttered the following words in his direction: “to hell with the monkey”; at this point I stop the game and call the players involved to report what happened and player Edenilson confirms the above words and player Rafael Ramos says there was a misunderstanding due to his accent (Portuguese) and says that he said the following words “fuck fuck”. Due to the distance between the athletes and the noise of the crowd, neither I nor any other member of the judging panel can hear or understand any of the words mentioned above. So I keep playing.”

See also  J.C. Penney will get extra time from lenders in push for survival