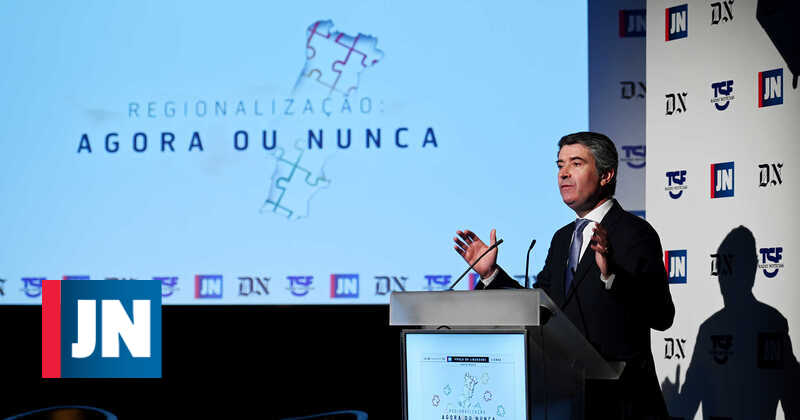 At a conference organized by JN, DN and TSF, the main political parties spoke out in favor of promoting regionalization. The SDP believes that today there is “some political consensus” in this regard, although it rejects the model of increasing public spending. The PS recalled that they are defending the referendum for 2024, but the PCP has conditions to complete the process in 2023.

Jose Luis Carneiro, Deputy Secretary General PS, defended the need for regionalization as long as it persists. “Regionalization – yes, with the consideration and consolidation of options,” he said this Wednesday in Lisbon.

The socialist stressed that his party’s “obligation” in the legislative election program is to first complete the decentralization of power.

“It is planned that the services of Deconcentrated Public Administration can now be integrated into the CCDR, and as soon as this process is consolidated, we can consolidate this path and hold a referendum in 2024,” said Jose Luis. Carneiro.

Arlindo Cunha, Director of the National Strategic Council Psd, acknowledged that the party is ready to promote regionalization, albeit with some conditions. “We think that after so many disagreements, a certain political consensus can finally be reached,” he stressed.

However, the former government minister Kavaku Silva and Duran Barroso warned that in order to win the consent of the Social Democrats, this process cannot increase public spending. “Budgetary rigor is needed,” he said.

Before moving on to a referendum, the SDP proposes to act on three levels: completing decentralization, implementing “deconcentration” measures (such as relocating some government services or providing “reliable” tax incentives to companies within the country). and, finally, promoting “structured” discussion on the map of the regions.

Regionalization “by itself” does not eliminate inequality, says BE

Katharina Martins, leader BE, said that he followed the regionalization “sufficiently”. However, he argued that one of the country’s main problems is the “economy of inequality” and that the creation of regions “in itself will not solve this issue.”

“It is impossible to fight inequality without public services,” the blockist said, recalling that from 2001 to 2014, about 6.5 thousand public services were closed in the country. He defended that regionalization should be discussed by launching a “inclusive, open and democratic” process and called for direct elections to the CCDR.

Joao Oliveira from PCP, announced the “commitment” of the communists: the party understands that it is possible to “complete the whole process at the end of 2023 with the election of the relevant bodies.”

According to the communists, the councils should be consulted on two possible map proposals: one approved in 1998 and one for the five CCDR-compliant regions. Only after that should a referendum be announced, – defended the parliamentary leader of the PKP.

Timorese journalist applies for PR because the country needs communication