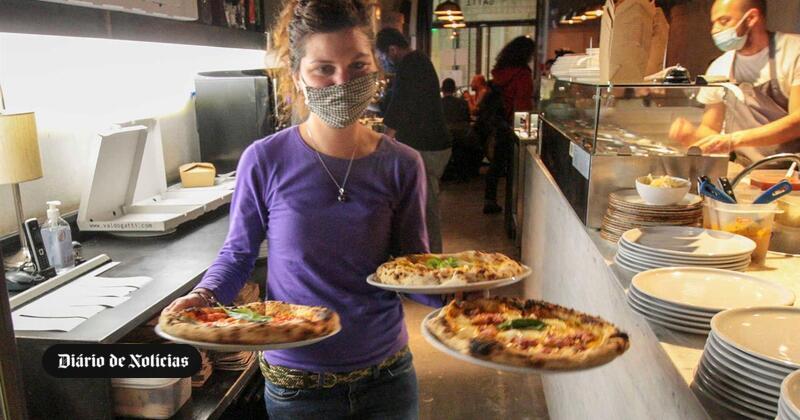 Elena Russo is an Italian from Tuscany, from a small village near Florence. He is 33 years old and has been in Portugal for three months now. He quickly obtained a residence permit, an easier process for EU citizens, who make up a significant proportion of the country’s 109,000 new residents. She is in awe of Lisbon and is one of the 5,307 Italians who came to live in Portugal last year, the community members most represented on the new visas. They are followed by the French and the Germans.

“I have a kind of European tour. She lived in Great Britain, Holland, Spain, now in Portugal. I started working in a call center, but I didn’t like it, and I came to this restaurant. I like the contact with clients, and I work in the center of Lisbon, I see how the Portuguese live, I also have many Italian colleagues, ”explains Elena Russo.

She works as a waitress at Valdo Gatti Pizzeria in Bairro Alto, which was overcrowded last Friday despite a quiet evening. Portuguese and foreigners at the table, Italians in the kitchen and in service. Elena will stay in Lisbon for the time being, she says: “I like everything in Portugal: food, people, climate, there is a very good atmosphere. People are much happier. ” If I had to choose the country in which I will live for a long time, it would be Portugal or Scotland. The lower salary compared to Italy is not an obstacle because it is offset by the lower cost of living.

And, not to mention the tourists, it seems that the nightlife in Lisbon is dominated by local foreigners.

The French, Calle Mathis, 31, and Abde Chebab, 42, the first from Marseille and the second from Paris, met at the first company they came to work for and left in the meantime.

“I came to visit a friend, and I really liked it. I returned to Paris, but since there was nothing to do, I decided to look for a job in Portugal. Life is calmer, less aggression, food, landscape“ Women live very well, ”says Callette – He has a law degree, runs Uber and points out that the foreigners who live here have higher salaries than the Portuguese, in addition to which it is the companies that are hired to carry out the entire installation process in the country, which he says , greatly simplifies this process.

He drinks a glass with Abde Chebab, who explains how to travel to Portugal: “At that time in France there were many reports of the country mentioning that it has a quality of life, it seemed to me that there is an environment similar to Marseille, beaches and I decided to take a chance. ” Has been working on a webinar (online course for events) for a year now.
He has been here for three years, two years before he received his permanent residence permit. He traveled from north to south of the country. Since 2018, many young foreigners have arrived here, including many French. “They come for two or three years, and those who are older stay. I want to stay, ”says Abde.

The 2020 Immigration Report at the Border and Seeking Asylum has already noted “a steady increase in the number of foreigners from EU countries”. It stresses: “They confirm the particular influence of the attractiveness factors mentioned in the years, such as the perception of Portugal as a safe country and the tax advantages arising from the non-permanent resident regime.”

The 109,000 new residence permits issued in 2021 are mainly divided into three types of visas and with a small numerical difference between them, in contrast to 2020, when EU citizens and family members of immigrants were allocated. Family reunification (29,473), immigrants who come to meet with relatives come first. It includes representatives of the EU countries, but the largest number of them are in Brazil, Angola, India, Cape Verde and Guinea-Bissau. This is followed by persons from non-EU countries for work, article 89 (28,544), as well as Brazil (13,027), India (5685) and Nepal (1876). Third, from the EU, Italy, France and Germany. There are 15,405 people who have justified admission in 2021 for study, also mainly from Portuguese-speaking countries: Brazil, Cape Verde, Guinea-Bissau, Angola and Sao Tome and Principe.

Rebelde presents the Portuguese version of Sálvame; watch the clip

See also  An officer told George Floyd that 'a lot of oxygen to talk', the body camera transcript showed