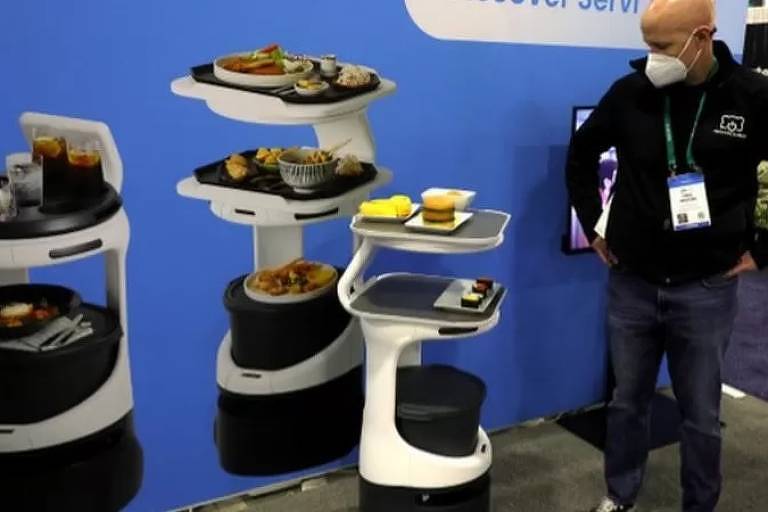 One of the largest technology exhibitions in the world, CES 2022 is taking place in Las Vegasin the US this week.

The pandemic and concerns about the spread of the omicronic variant of the coronavirus have led to a decrease in the number of participants and some of the largest companies in this business including Meta (formerly Facebook), Google and Amazon. were excluded.

Regardless, there is still a lot of interesting, strange or curious technology news at the event.

Check out some of the highlights at the show.

Where is the remote control?

Televisions have always been a big attraction at CES – with a focus on big TVs, as they seem to get bigger every year.

This year, the focus is on a much smaller accessory – the TV remote control.

In 2021, Samsung added a solar panel to the back of its remote to eliminate the need for batteries.

Its newer version also has a small antenna that can pick up RF signals emitted by Wi-Fi routers up to 40 meters away, allowing the device to be charged even in the absence of the sun.

Samsung said the device will be included in new TVs and other home appliances, although it did not provide details on specifications.

If you’ve ever gotten bored with the color of your car, you might like BMW’s idea of ​​being able to change it at the touch of a button.

The company demonstrated a car with a body that changes color or creates a pattern when charged with a small electric current.

Its “iX Flow” technology is similar to that of the Kindle and other e-book readers and covers the car with millions of tiny microcapsules.

The project is currently at the conceptual stage, but the idea is not only in appearance, but also in efficiency. For example, a car’s color will change to lighter in hot weather and darker in colder weather, reducing the need for cooling and heating inside the car, the company said.

Critics point out that the system appears to be temperature sensitive and that there are currently only three colors available: white, black and gray.

Previous CES editions have featured dozens of humanoid robots ranging from cute to creepy and bizarre. While some of them are not yet on display this year, it looks like 2022 could usher in an era of more practical robots.

The Bear Robotics Servi was one of the highlights. He floated into one of the hamburger and sushi trays, taking the place of the human waiters.

A search robot was also shown. According to CEO Mike Dooley, Labrador Systems introduced the Retriever robot, which was designed to help people with disabilities.

The wheeled robot moves using sensors, and users communicate with it using voice control or an app. It can load up to 11 kg and reach different heights.

The robot is in the testing phase and is scheduled to go into production in 2023.

CES has also become a showcase for cutting-edge technology in the cosmetics industry.

In 2022, Icon.AI’s Sound Mirror received the Innovation Award. It looks like a regular mirror, but hides a smart voice-activated speaker that can play music, let you know the weather, set an alarm, or control other smart devices.

Meanwhile, L’Oreal has unveiled a homemade hair-dyeing device, and Ninu has released a smart device that can create a personalized perfume scent when connected to a smartphone app.

Its high-tech perfume bottles can deliver hundreds of different fragrances depending on the mood of the wearer, the weather, or the occasion. The brand should start shipping the first copies in June.

And the Y-Brush, an irregularly shaped jaw-shaped electric toothbrush that claims to clean teeth in just ten seconds and debuted at CES in 2017, is back this year with an improved design. This includes a more comfortable grip and additional features like teeth whitening and gum care.

As the coronavirus continues to pose a threat to real-world events, some companies have opted for fully virtual presentations, while others have tried to combine their physical presence with a presence in the “metaverse” – a digital world that, according to some, will become a space to work, learn. and play in the future.

Samsung offered a “metaverse booth” that allowed users to try out some of its products while decorating their homes.

Procter and Gamble also opted for the metaverse experience. In partnership with the Royal Botanic Gardens of London, users can stroll through the botanic garden’s virtual grounds and learn about the company’s ingredients and sustainability initiatives, as well as chat with brands such as Gillette and Oral-B.

Meet the Samsung Galaxy S22? The unpacking video is already there