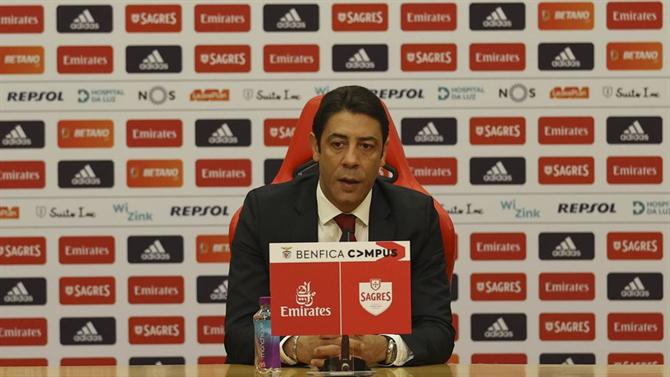 BOLA invited three well-known Benfica fans to comment on Rui Costa’s interview on BTV the day before yesterday. There was praise, but there was also criticism after 90 minutes of explaining that Francisco Benítez, Gaspar Ramos and Vasco Mendonza were far from deserving of 10.

“I was pleased to know that the bylaws committee is progressing at a good pace and that there will be a draft at the end of February, a sign that we will have a structuring document about the life of Benfica that can help us change this dark page,” he listed without stopping: “I also liked to hear that the sport needs more attention and that the pavilions will open for fans, this is a good idea. And the renovation of the interior of the stadium… he said he would do it, and I completely agree.”

However, in other subjects he was deeply dissatisfied. “The audit should be in the Benfica group and, it seems, in the Ministry of Public Administration (MP). The first three contracts were analyzed to make sure MP did a good job, now another 55 contracts… Is this an audit? Benfica is interested in auditing the entire Benfica, to find out if there are crimes in the organization, in the relations between employees, companies and suppliers,” he said, continuing: “I also did not like that Benfica did not became an assistant in the process. They insist on whitewashing Operation Red Card, which means nothing, it’s Vieira’s own business, and he keeps pushing the situation with his belly. And I didn’t like it either, then Rui Coste was uneasy when he talked about how contracts are signed, especially when buying players. So, is he the administrator in charge of football and he signs contracts because he is there if there is no one else to sign?”

Another negative point was the declaration of absolute confidence in Domingos Soares de Oliveira.
“He and Miguel Moreira are the only two defendants who remain at Benfica, and Domingos has been out of control of SAD for a long time,” he said.

Gaspar Ramos, the historic leader of the Eagles, found the explanation about Jesus “a little complicated” and felt that Rui Costa should have done better.

“He had a duty to prevent this situation from happening in due time, which discredited him and Benfica. So with your experience you don’t know what’s going on in the resort. At least he should have been informed about the structure by people if they didn’t… I think it’s poorly explained, even if it could happen, as he says it shouldn’t have happened. , he pointed out, believing that this trial was “a disgrace to all Benfists.”

Vasco Mendonsa, columnist for A BOLA, was also far from happy with everything he heard.
“I liked that Rui Costa introduced himself to the partners and took the time to do it. It was an unusually long interview and I felt like it tried to cover a lot of topics and provide a lot of clarification,” he said before moving on to criticism.

“I didn’t like how the signing of documents was described and that it didn’t amount to harmful behavior or a bad decision. As far as I understand, the administrator does not have direct contact with everything that happens, in an organization like Benfica, with the role of Rui Costa in SAD, who had a football portfolio, it is difficult to understand that someone says that he signed the papers, but this does not mean that he was aware of what was happening,” he stressed.

Read it in full in the print edition or digital from SHAR.

BALL – “Unimaginable to share the field with LeBron” (NBA)

Lvov, responsible for communication, criticizes the decision on penalties, marked in favor of the guests

Miguel Braga, in his speeches on the Rayo-X program on the Sporting TV channel, analyzed the defeat of Sporting in a reception from Sp. Braga, pointing his finger at the referee, namely because of the penalty awarded in favor of Braga, for the absence of Matheus Reis about Galena. Responsible for communication with the lions considered the move decisive in the outcome of the match, leaving criticism of VAR to Joao Pinheiro. “Before the penalty, Sporting showed an impeccable game. Braga didn’t have a chance to score. Sporting had several. you need to indicate a foul or continue. That’s not what happened. The first mistake was not following the VAR protocol. Braga took advantage of the irritation this move caused. Nobody complains in this zone. .A clear protocol error has occurred. Unfortunately, the game is marked by VAR interference. Nobody sees a foul there,” he defended, still remembering the move with Palinha closer to the break: “There was an elbow strike in the Paligny area. I’ve seen similar bets end differently. With a yellow card or even a red one, sometimes…” Santos targeting the Disciplinary Council (CD) of the Portuguese Football Federation. “It’s like a surreal soap opera. This Nuno Santos case is absurd because there are images proving there was no action,” he assured after the KD left punishment to the right wing for the confusion in the game between Wisela and Sporting.

A week later, when it became known that Rafael Leau would have to pay Sporting €16.5m compensation for the unilateral dismissal, after the Court of Appeal of Lisbon (TRL) denied the player’s request for an annulment, Miguel Braga addressed the issue. discovering that the debt to the lions had already reached 20 million euros. “TAD sentenced Rafael Leao. Compensation at this stage will already be close to 20 million euros. The decision stands, there are other processes against Lille to declare the club’s solidarity in the payment, and we believe that the reason is on our side. “, he concluded.

Adana Demirspor striker Mario Balotelli (9 goals in 21 games this season) has returned to the Italian national team. Thus the controversial player returned to blue team more than three years after the last appearance, on September 7, 2018, in the game against Poland for the League of Nations.

Balotelli is part of a group of 35 called up by Roberto Mancini for a training camp from January 26 to 28 at the Coverciano training center, which will serve as Mancini’s “screen” ahead of the play-off semi-finals. for the 2022 World Cup against North Macedonia in March. If they win, Italy will play either Portugal or Turkey in the final.

On the list, we also note the presence of Joao Pedro Galván, the Cagliari forward who came through Estoril, one of the seven debuts promoted by the manager. Marco Carnesecchi, Luis Felipe, Davide Frattesi, Samuele Ricci, Giorgio Scalvini, Nicolo Fagioli were also called up for the first time.