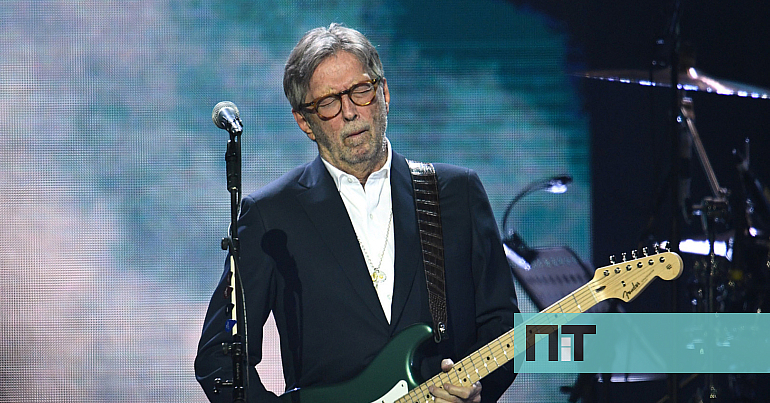 Conor Clapton was four years old when, as a result of a tragic accident, he fell from the window of his family home in New York on the 50th floor of an apartment building. Father Eric Clapton, one of the most prolific and talented musicians on the planet, banished pain with one of his most famous creations.

With Tears in Heaven breaking sales records, the world was touched by Clapton’s pain. Thirty years later, the world seems to have come together in a common hatred for the guitarist who debuted with the Yardbirds, exploded Cream and cemented his solo legend as one of the finest in rock and blues. But what makes the hero fall from the altar and become the object of such anger?

The latest episode, featuring the 76-year-old musician, made headlines around the world, not only because of his apparent insensitivity, but also because of his caricature of one of the most successful artists of his time.

All this happened when a German woman was summoned to court after trying to sell a pirated copy of Clapton’s recording on the Internet for about 15 euros. The 55-year-old German woman was sentenced to pay more than € 5,000 under the threat that if she tried to sell the album again, she would face a fine of around € 400,000 and a six-month imprisonment.

“Germany is a country where the sale of pirated copies is widespread, and it hurts the industry and customers due to poor quality and misleading recordings,” said Clapton manager Michael Eaton.

In turn, which did not convince fans, Clapton this Thursday, December 23, announced that he would not withhold the money that the court decided to collect from the German. “This is not the person Eric Clapton or his publisher is targeting,” the statement said.

This battle between David and Goliath is far from the only stain on Clapton’s image, who has taken advantage of the pandemic to prove himself as fervent denial. The conspiracy theories touted in the past two years have shocked fans, but especially friends and former colleagues of the musician.

Also in the summer, Clapton refused to give concerts in concert halls, requiring the presentation of a certificate of vaccination. A couple of months ago, he launched an angry public debate against vaccines.

“I took the first dose of AstraZeneca vaccine and immediately experienced a severe reaction that lasted ten days. I eventually recovered and was told that I would need to take another 12 weeks later. Six weeks later, I was offered a second dose and I moved forward, this time with more knowledge of the dangers, ”he wrote.

“It goes without saying that the response was disastrous. My arms and legs were frozen, numb, or burning. They have not been used for two weeks. I was afraid that I would never touch it again – I have peripheral neuropathy and I should never have even gotten close to a needle. But the ad said the vaccines were safe …“

Some fans were shocked, others were quick to recall that the symptoms Clapton identified, besides not even being similar to the most common ones – and identified by a pharmacist in clinical trials – were already a complaint from the musician in 2013. , which he then explains as the consequences of neurological problems.

By this time, the world could predict that Clapton was not the biggest proponent of the pandemic response. In late 2020, he teamed up with Van Morrison to sign an issue that vehemently objected to the conclusion.

“Do you want to be a free person or do you want to be a slave? Do you want to listen to these currents while you are not in your grave? “- read the lyrics of the song” Stand and Deliver “. And this is against the backdrop of constant comments on the Internet and off the Internet, where the musician questions everything from scientific research to expert opinions, which he classifies as “pure propaganda.”

Clapton looks depressed. On a podcast, he learned that his own family and friends considered him “a little crazy.” “Over the past few years, I have seen many disappearances, many people fleeing quickly. It was a way for me to improve my friendship. It boils down to a group of people that I clearly love and need. “

One longtime friend who decided to cut ties was Robert Cray, a blues musician who was shocked by Clapton’s choice to mix slavery and imprisonment into a “Stand and Deliver” theme. He sent you an email to clarify the matter.

“His reaction was to tell me that he meant the slaves of England,” he says. Clapton never backed down and Cray did not respond, in addition to canceling his performance on the British musician’s North American tour. This did not stop Clapton from returning to launch two more imprisonment topics.

“I’ve talked to other musicians, old friends, great artists, and I won’t reveal who they are, but they all say, ‘What the hell is he doing? “Says producer Russ Titelman, who worked with Clapton on his film. record record “Disabled”.

“I haven’t spoken to anyone who knows Eric has the answer,” says drummer Jim Keltner, who has known Clapton for over five decades. “We are all in the same boat. Nobody can understand what’s going on. “

The British guitarist’s bad reputation has sparked other controversy lately. Rolling Stone, in a lengthy clip about the musician’s new black face, is reminiscent of the controversial episode in which Clapton starred in 1976.

Onstage, clearly drunk and under the influence of drugs, Clapton decided to take part in a political campaign and publicly show his support for the far-right politician Enoch Powell and an ardent supporter of anti-immigration laws. Without letting him predict, Clapton asked the public if there were any foreigners among them.

See also  The Queen of Hearts is out. know the personality

“I don’t want you to be here in this room or in my country,” the musician said. “Listen to me, I think we should all vote for Enoch Powell, he is our man, he is right: we should send them all away.”

The speech could have ended there, but no. “Don’t let Britain turn you into a black colony. Send foreigners away. Drive out the scum. Drive out the blacks. “Keep Britain white,” he said. “I used to love drugs, now I enjoy racism. It’s much heavier. “

Clapton is forever lost. “Send away the squatters, blacks, Arabs, Jamaican bastards. They don’t belong here, we don’t want them here (…) What is happening to us? “

Due to the problem of alcohol and drug addiction, Clapton had to wander through each chapel, asking forgiveness for the disaster. I didn’t. The apology came timidly and dearly. He even called racist remarks “something comical.” “I’m not very good at politics. I don’t even know if this is good or bad for him [Powell] won. I don’t know who the prime minister is. I don’t know what came over me that night. Something must have happened that day, but it turned out strange. “

He confirmed that he was not a racist in 2004, but he adhered to the view expressed in 1976: Powell’s immigration policy was correct and the politician was “extremely courageous.”

“I am a little confused by the fact that I was a little racist, which does not make sense. Half of my friends were black, I dated a black woman and represented the genre of black music, ”he explained in a documentary about his life. “I’m not sorry, it was terrible to say,” he noted before immediately turning back. “I even think it was something funny.”

Here is Lilibet! Harry and Meghan present their daughter on a Christmas card | British royal family