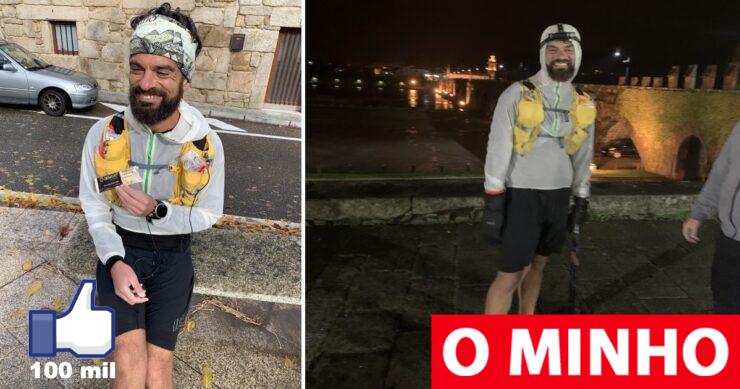 The goal was to “drive” the Portuguese route at once, autonomously, that is, without anyone giving water or food and without any long stop. Hugo Palma, a computer scientist and racing enthusiast, left Porto and covered about 150 of the 227 kilometers planned because his extreme fatigue took over 28 hours later, leading to a premature abandonment of the adventurer.

A regular athletics competitor, Hugo decided to try a more secluded route and decided to try to set a record on the Portuguese Way of Saint James between Porto and Compostela without stopping so that it could be registered on the portal. “FastestKnowTime”, which is designed to record the travel times of certain routes. The challenge was to get the route out in 48 hours, but he still ended up in the province of Pontevedra after being delayed in Ponte de Lima due to bad weather.

One of the worst moments happened on Friday evening in the municipality of Limiano at the end of the working day (departure took place at 10:00 in Porto). According to an interlocutor who reported Traveling through on Twitter, Hugo “got lost at night, without support, alone, without any visibility” in the middle of the mountains in Labruja parish, but decided to “stop for a while” and “curl up in the thermal water.” blanket “, before resuming the path. A few hours earlier, he had been with friends in the center of Ponte de Lima, where he stopped for a few minutes to recover.

Despite the difficulties in the mountains, Hugo did not give up, he returned to a point he could identify and resumed the race. “These were very, very difficult hours, but they passed 8 hours after dawn,” the source said. By 11:30 I was already in Tui. That is, he was still running until noon, and in the end he was overcome with fatigue.

A report about the beginning of a mountain range, lost at night, without support, alone, without visibility (rain and fog) … he decided to take off the heat blanket and curl up on the ground to think a little. He decided to continue and it was a very difficult hour, but he overcame them and ran 8 hours after dawn. pic.twitter.com/pFQAmF3Jkq

In the end, Hugo asked for an SOS with the appropriate coordinates as he crossed the O Porrigno industrial area. In case of a problem, the satellite was close, 500 meters away. And so it was. He found Hugo with an “unbalanced temperature”, a victim of “extreme fatigue, which was already dangerous,” as he could no longer see the cars passing along the road and risked being hit. “In bad weather, he worked 28 hours,” he recalls.

They cannot imagine what it means to receive such a thing. Fortunately, it was 500 meters away from him, it would have been hard to get over to his side. pic.twitter.com/0cbCtzUC5S

By the time this news was posted, Hugo was still recovering from an adventure that ultimately did not have the desired end, but he still had all the flavoring for a unique athlete experience. As for Eva, her partner, it was the experience of getting to know the Minho region.

Man … Ponte de Lima is BEAUTIFUL! I fell in love.
Besides eating one of the best meals in recent memory at Taverna Vaca das Cordas.
Isabella cod. My God!

See also  Typhoon Amphan: Thousands of people in India and Bangladesh have been displaced by storms