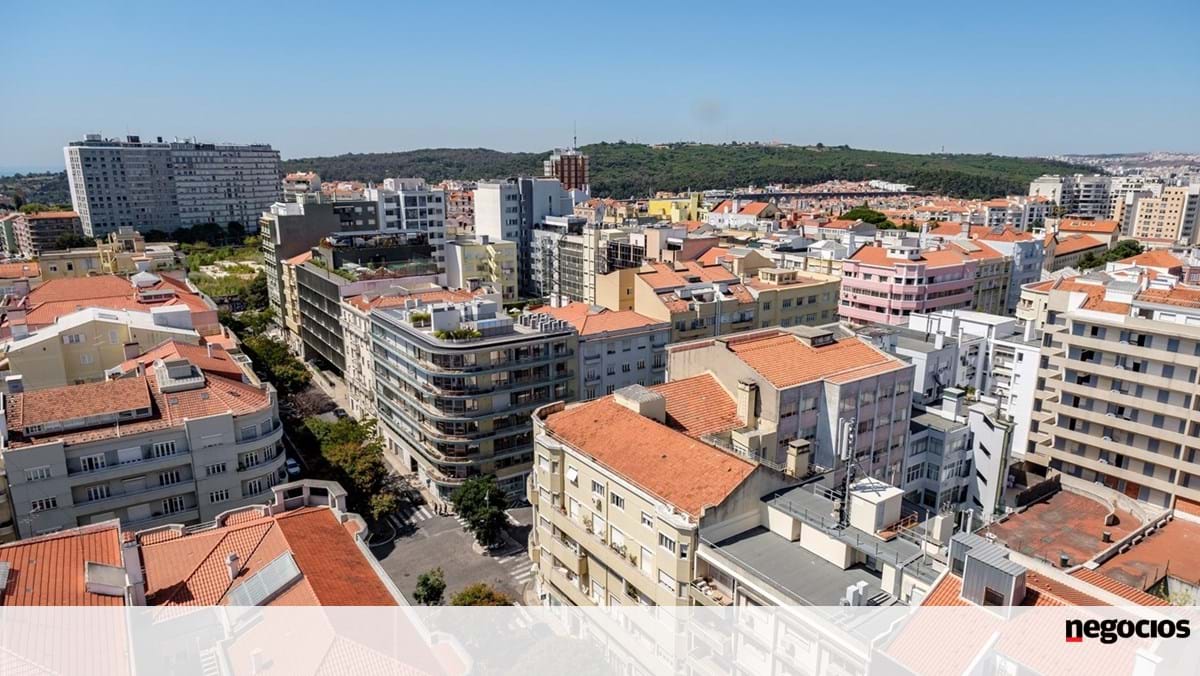 The house price index rose 6.6% year on year in the second quarter of this year, up 1.4 percentage points from the previous quarter, the National Institute of Statistics (INE) reported on Wednesday, Sept.22.

Prices also rose from the previous quarter, with the index up 2.2% (versus 1.6% in the first quarter).

Despite the acceleration observed in the same quarter of last year, INE says that “in the second quarter of 2021, the average annual rate of change” in the house price index was 6.9%, which corresponds to a slowdown of 0.2 percentage points. compared to the previous quarter ”.

On the other hand, 52,800 homes were sold between April and June this year, the highest quarterly figure since at least the beginning of 2009, a date that marks the start of the INE series.

This was mainly due to the sale of existing homes (86% of the total), with the number of such transactions also being the highest since the beginning of the series.

This is 58% more compared to the same period last year, the increase is partly due to the underlying effect caused by the pandemic.

“This significant increase is partly due to an underlying effect, given that the year-on-year comparison covers the April to June 2020 period, a period characterized by significant restrictions on economic activity as a result of COVID-19 containment measures. a pandemic that implied the lowest number (and cost) of transactions since the 3rd quarter of 2016, ”explains INE in a review published today.

There was indeed a drop in the second quarter of last year, but the data presented now, as mentioned above, is higher than in the period before the pandemic.

The value of houses sold was about 8.6 billion euros, up 66.5% over the same period last year. The cost is also the highest in at least twelve years.

News updated at 11:22 am with more information

PSI-20 is doing better session in 6 months, BCP and Galp are up more than 5% – Stock Exchange

After falling more than 10%, the analyst points out where Bitcoin, Ethereum and XRP are going.

US airlines warn of ‘crisis’ caused by 5G | Aviation

With the expansion of 5G, major North American airline executives have issued a warning about what they say could be a “catastrophic crisis” caused by the new technology in the sector’s operations in the US.

In a letter to the White House and U.S. regulators, the executive presidents of American Airlines, Delta Air Lines, United Airlines, Southwest Airlines and Jet Blue, as well as transportation services UPS and FedEx, warn that new 5G technology can, when used on US frequencies and near airports, interfere with instruments such as altimeters, which measure the distance of an aircraft from the ground and are needed, for example, to facilitate landings in more difficult atmospheric conditions.

Avoiding these risks, they argue, would require a large number of flights to be suspended, potentially leading to a “catastrophic crisis” for the industry. “On a day like yesterday, more than 1,100 flights and 100,000 passengers will be cancelled, rejected or delayed,” the letter said.

The problem, they say, is that 5G technology in the US has been assigned a frequency close to that used by aircraft in instruments such as altimeters. At the request of airlines, telcos delayed the rollout of 5G at airports by 15 days earlier this year, but the suspension is now coming to an end.

In Europe and other Asian countries, this issue has not been raised because the frequency assigned to the new technology is farther from the frequencies used by the aviation industry, which greatly reduces the potential for interference.

On December 17, the European Aviation Safety Agency stated that this is a specific problem in the US and that “at this stage, no risk of unsafe interference in Europe has been identified.”

Garden of Osorio. After arguments and threats of reprimands, the banker slams the door

The Portuguese commando of the banking world slammed the door of the second largest Swiss bank. António Horta Osorio stepped down as president of Credit Suisse nine months after taking over the banking institution, following an internal investigation by the bank to determine if he violated current pandemic crisis regulations. He now explains his reasons for leaving: “I regret that some of my personal actions have caused hardship for the bank and compromised my ability to represent it inside and out,” the statement said, adding that “thus, I believe that my dismissal is in the interests of the institution and its shareholders at this critical time.”

Earlier this month, the chairman of Credit Suisse assured that the Portuguese banker would receive a formal reprimand from the board of directors after an internal investigation confirmed that Horta Osorio had violated domestic rules regarding covid-19 for the second time. It was about his entry to Switzerland at the end of November in violation of quarantine rules. A situation which he confirmed himself, claiming that it was not intentional and that the trip was reported to Swiss health authorities and the financial regulator. But this was not an unprecedented event. The same thing already happened in July when he attended the Wimbledon tennis tournament when he was supposed to be in isolation, against the country’s rules.

A Portuguese banker has been called in to lead Credit Suisse to manage the crisis caused by the Greensill Capital and Archegos Capital Management scandals, which cost the bank more than five billion dollars (more than 4.3 million euros). In fact, the fall of Greensill was the first of two major problems to emerge in 2021, soon followed by the collapse of Archegos Capital Management, which the Swiss bank funded with billions of euros.

Thus, Credit Suisse remains in the grip of one of the most serious crises since 2008, which Horta Osorio was unable to resolve by leaving through a small door. On the day he announced his departure, the financial institution’s shares fell 2.26% to 9.33 Swiss francs (8.94 euros).

“Club” of great bankers Nicknamed El País “city samurai” or “special banker” to others, he led Llodys, considered one of Britain’s largest retail banks, for 10 years. He left the presidency in June last year – despite announcing his departure more than a year earlier – after completing a third strategic plan developed for the bank, whose main tasks were to prepare it for the digital world. From there I was ready to go to Switzerland.

In 2020, he received the New York Foreign Policy Association Award for his international career in several countries and for his contribution to spreading his knowledge of international economic and financial affairs. He also received a Visionary Award from the British REBA for Lloyd’s exemplary approach to the mental well-being of employees and society in general, and was knighted by the Kingdom of Elizabeth II for his role in rebuilding the British financial institution after the financial crisis. And he was even considered one of the 50 most influential personalities in the world according to Fortune.

The fact that he publicly admitted that he suffered from burnout did not weaken him, on the contrary, since this discussion on this topic was never openly held among top managers.

Married with three children, he is known for his passion for sushi, diving, tennis and skiing. The banker holds a degree in business management and administration from Católica, having started his career at Citibank. While still working, he received an MBA from Insead, after which he was hired by Goldman Sachs. He develops his activities in New York and London related to corporate finance in Portugal. From there to joining Santander was a leap. At the age of 39, he became the youngest president of a bank in Portugal and managed to turn it into one of the largest national banks after he managed to buy Totta and Crédito Predial, thus stamping his passport into the club of the great Portuguese bankers. . He later dropped the bomb, saying he was going to leave the country.

However, he was always attentive to the problems of the Portuguese economy. Horta Osorio spoke on several occasions about the problem of the country’s lack of ambition, and even moved to an “alarming” level of bad debts in Portuguese banks.

He recently stated that “it’s amazing that in Portugal you earn an average of a thousand euros a month”, while “in Ireland you earn twice as much” and “in Spain you earn 50% more”. And he went even further, asking the question: “Are we satisfied with the level of wealth that we have? Are we satisfied with a country that is not growing? Shouldn’t we have big ambitions?

Other disputes This is not the first time that Horta Osorio has been involved in controversy. Behind the scandal with the payment of personal expenses with bank money, when he was in Singapore to attend the International Monetary Conference. The information was disseminated by The Sun newspaper and pointed to accounts of about four thousand euros. In addition to the “party”, expenses were to be made with the help of consultant friend Tony Blair, with whom the banker was photographed walking in Singapore. There were rumors at the time that it was an extramarital affair. The story has taken on a broader scope since three years ago the banker himself introduced a code of conduct for all employees of the financial institution. One of the points was about the image that bank employees should create: behave moderately and take into account how family members and friends will perceive it.

The Lord Who Follows Axel Lehamn has been chosen by Credit Suisse to replace the Portuguese banker where he has worked since October last year. “Lehmann is ideally placed to lead the bank’s strategic transformation,” Credit Suisse vice president Severin Schwan said the same day the Portuguese manager’s resignation was announced.

EDP ​​is one of the candidates for assignment of the point of connection to the electrical network of the Pego power plant. A few hours before the closing of the open tender, which ends this Monday at 23:59, and in response to a question from Negosios, the electric company confirms that it has put forward a proposal, however, without providing further details on its content.

A the hypothesis has already been put forward Miguel Stilwell, CEO of EDP and EDP Renováveis, last November. “We are looking into Pego’s options. But we haven’t decided yet,” the official said.

“If we think we can bring a competitive offer to the table, we will obviously move forward,” he added. Responding to the same question about the content of the proposal, Stilwell said it would “definitely include a renewable energy component” and “may include a hydrogen component.”

The Pego plant stopped coal production at the end of November last year. Public auctions for the location of the point of connection to the power grid began in September, and about two dozen applicants will take part in them. A 630 MWh grid entry point considered “valuable” is at stake.

A preliminary report with the results of the tender will be published within 15 working days by the Directorate General of Energy and Geology (DGEG). It is expected that the final verdict after hearing the interested parties will be delivered within a month.