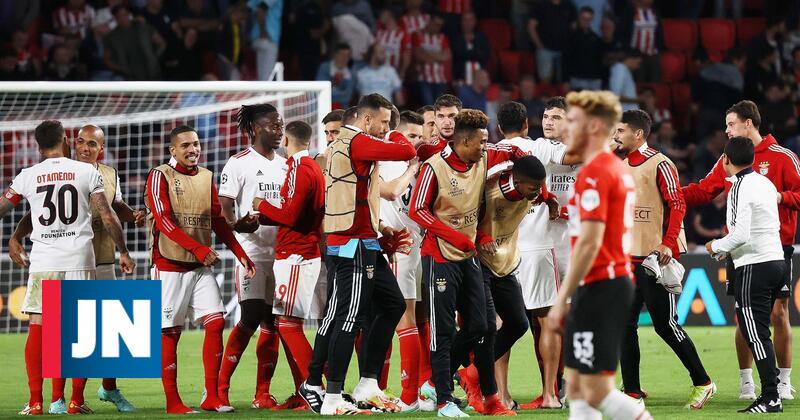 Benfica was forced to suffer defeat in Holland, but will join Sporting and Porto in the Champions League group stage. Since the 2017/18 season, national football has not guaranteed UEFA clubs three spots in the main competition.

Four years later, Portugal returns to three representatives in the Champions League group stage after Benfica managed to barely survive the battle for Eindhoven and join Sporting and FC Porto in the main showcase of European football. … Regardless of the competition results, each of the three big three guaranteed a minimum cash flow of € 37 million – the present state at a time when clubs are still facing the consequences of the covid-19 pandemic.

The country’s champion Sporting and runner-up FC Porto have already booked their places in the draw to be held tomorrow in Istanbul, Turkey, from 17:00 with Benfica, which had two qualifying matches (Spartak). Moscow and PSV) to achieve one of the main goals for 2021/22.

As national title holders, the lions go directly to the draw 1 basket, reserved for the national champions from the leading federations and the winners of the Champions League and Europa League last season. On the other hand, dragons and eagles are in basket 3 and the trio are unlikely to get rid of the very difficult groups, mainly due to the composition of basket 2: Real Madrid, Barcelona, ​​Juventus, Manchester United, Paris. Saint Germain, Liverpool, Seville and Borussia Dortmund.

Each of the Portuguese will face one of these sharks – Sevilla and Dortmund are theoretically the most accessible – while Porto and Benfica have yet to “pray” to escape some of the giants in basket 1, which, curiously, have more “Choice”. “This basket is 2. Bayern Munich, Manchester City, Atletico Madrid and Chelsea are beans to avoid, and Villarreal, Inter Milan and Lille are possible freebies, considering of course we are talking about the Champions League.

See also  We need jobs and clean energy. Why not build power lines?

Given that teams from the same country cannot meet each other in the group stage, Sporting knows that they only have six potential opponents in the third basket with some pitfalls in between – Ajax, Leipzig or Atalanta – and are waiting for today’s matches to find out if Shakhtar and Salzburg will also be in this game. Not to mention, there is no shortage of respectable rivals in Pot 4 such as Milan and Wolfsburg, with the most coveted contenders being Bruges, Young Boys, Malmö and Dinamo Zagreb or Sheriff. Now let the Portuguese lucky balls roll