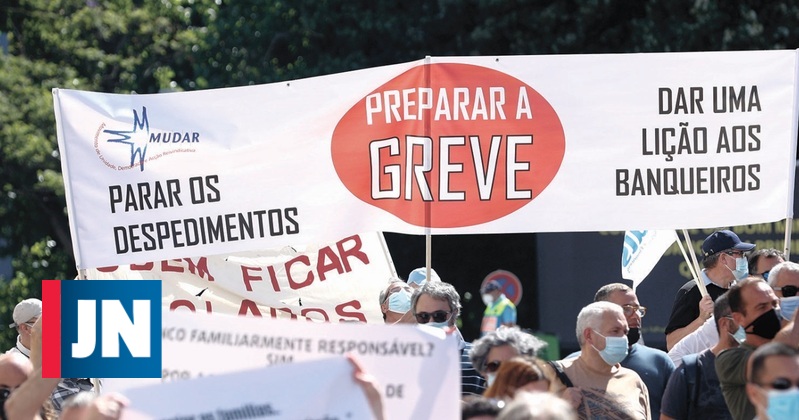 More than 650 bank employees have turned down offers to leave Santander and BCP. Trade unions promise to do everything to stop collective layoffs.

Decisions are still pending, but workers and unions are ready to put more pressure on banks, which have ongoing processes of firing employees. “This is expected to be a very hot end of summer for bank employees,” guarantees Mario Mouran, President of SBN, Portugal’s Financial Sector Workers’ Union. “It is possible that trade unions will ultimately radicalize their actions. And if banks insist on collective layoffs, a strike in this sector is not ruled out, ”he adds.

Behind this competition is one of the biggest redundancies in bank memory. In the second half of this year alone, up to 2,000 bank employees can leave the sector, of which about 1,600 will be fired from Millennium bcp and Santander.

In recent days, the situation in the two large banks with the most ambitious staff reduction processes has changed. After the deadline for employee response to the withdrawal proposals submitted by Santander and BCP, there is already some clarity as to what will happen in each of the banks. In the case of Santander, the bank announced that it intends to begin firing 350 people who refused offers of voluntary dismissal. There is still no official data on BCP, but according to JN / DV, about 300 workers will turn down the submitted quit offers. BCP has already considered moving towards the collective layoff of those who refused to leave in accordance with the restructuring plan.

The announcement of the strikes by the banking unions may occur as early as next week. But so far they have not confirmed what the next protest actions will be.

“Trade unions will not remain indifferent to what is happening. September will undoubtedly be hot, ”confirms Paulo Marcos, President of SNQTB, the National Union of Banking Technicians. “We can guarantee that this is not the end,” he emphasizes in a statement to JN / DV.

Using all possible resources, following the first protest, which for the first time united all unions in the industry, in July, Paulo Marcos and Manuel López of the União dos Sindicatos Independentes were received at an audience with the president last Friday. Republic of Marcelo Rebelo de Sousa.

“We explained to the president that the reductions being carried out are devoid of economic rationality. We are talking about companies with foreign shareholders, very profitable, which impose the dismissal of workers, ”promotes Paulo Marcos. And he stresses that “the large systems companies that are leaving – such as Altice, Santander and BCP – belong to sectors that have not been hit by the crisis” caused by the pandemic.

From an audience with Marcelo Rebelo de Sousa, union members expressed hope that the PR would accept concerns about the major dismissal processes taking place. “The political issue has not yet been resolved,” says the president of SNQTB.

Despite this, the trade unions promise not to wait for help from the government or the Assembly of the Republic and are preparing to roll up their sleeves. On the table are strikes, protests and provocative actions. “Next week we will have meetings to review the situation. We will not accept a collective dismissal, ”emphasizes Mario Mouran from SBN.

Due to the delay in the administration of justice, in order to exclude the possibility of going to court, bankers threaten to use other weapons. Including the strike.

Trade unions and workers’ committees accuse banks of pressuring workers and using harassment to get them to agree to proposals to leave institutions. Bankers deny the charges.

a thousand refused to exit

The bank, led by Pedro Castro and Almeida, will cut 350 seats from more than 700 people who refused offers to leave. At Miguel Maya’s BCP, 300 people will say no.