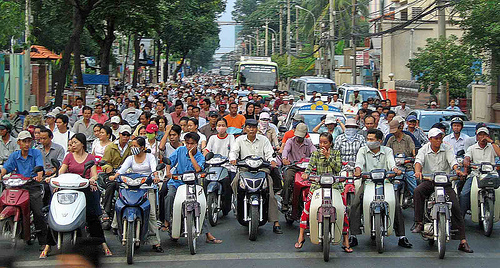 Because of Covid-19, we have been without vacations for a year and a half. An earlier tour report recreates the ‘out’ vacation replacement. Places, guides, comrades and natives of the country are remembered. It remains to remember the tours, views, landscapes and monuments. Finally, vacation inside, in the mental mode “tour (s) ismar”.

The focus is on a pre-coronavirus visit to Vietnam organized by the Boa Nova mission magazine, which was enthralled by the experience of an exotic country. By bus, boat, plane and on foot, it was about three thousand out of four thousand kilometers. coastline that has 1650 in a straight line. A country that on the map looks so much like puddles and rice fields of the second largest producer, hundreds of kilometers of coffee crops and, as we were told, lands of various minerals; like a dragon facing China. There are already many industrial plants and growing companies polluting rivers, beaches, adjacent waters and their fish. It will be the third largest coffee plant after Colombia.

In this range of three to four Portuguese, about 95 million live and work continuously. Tonkin in the north, Anamita in the center and Kochichina in the south. Many rivers are full of beauty and polluted waters leading to the vast Mekong Delta with its myriad of boats and river market. You cannot miss some of the guided boat trips. One of the incredible spectacles that cannot be forgotten is the thousands of motorcycle anthills. They follow us, look at us face to face, surprise us from the right, to the left, on avenues and alleys. They carry the driver, almost always in a mask that protects against pollution, with two, three, four more passengers. These processions do not stop; It looks like the bet came on pawns. During my first visit to the country, surprised, I even jokingly asked the driver if they had come to wait for me at the airport and accompany me. An accident can be expected through the anthill every five minutes; however, you won’t see them in a week. There is no explanation. A three-hour boat trip with a seafood lunch on board among dozens of islands in Halong Bay in the north bordering China was a spectacle of surprises and beauty. Hue led walking tours of the citadel, a “forbidden” imitation of Beijing. In search of ancient remains, another boat trip was made through the murky waters at Hoi Na, where the Portuguese Jesuit from Guarda, father of Francisco de Pina, 1585-1625. (The teacher of another Jesuit, Alexander de Rhodes) studied, taught and wrote for the Anamita (Vietnamese) language. Before that, it was an oral Chinese dialect, and since then it has been written in Latin letters.

The fortified city of Hue, the capital until 1975, serves to compare the Forbidden City of Beijing with other tyrannical empires and emperors, but comparing them to our culture of current, pilot democracies is more shocking than understanding past cultures. If we compare this to a ceremonial visit to the mausoleum of the great Ho Chi Minh in Hanoi, the chastity who defeated the Americans and unified Vietnam, we can better understand each other. Thanks to the tactics of this strategist, we have little experience of visiting the military underground of Ku Chi, near the Cambodian border. People under sixty were invited to climb into these wormholes, and those over seventy and eighty were afraid to surrender, but not everyone was careful; “88”, for example, crawled about thirty meters through the holes without panic. He was comforted that he was able to say that he did it, as did the million tourists who pass here every year.

Comparison is one of the most exciting travel experiences. In the north, at 170 km, we saw only the church; in the south, Bien Hoa, for 5 or 6 km, more than 15 or 20, many are comparable to large cathedrals. The north, through Hanoi, remains more Buddhist and communist, with the Ho Chi Minh mausoleum fueling this ideology. But that did not stop the Spanish guide from the north from weaving miracles with changes in communist discipline to obey and collect service fees for market countries in Africa, where everyone can already have the initiatives they want, but only with the Good of the One Party. A sort of Revolutionary Council on April 25 or close to the Constitutional Court of state communism, softer than in China. The guide boasted that the system had free schools all the way to the university. We, the participants in the discoveries and preachers, were left with the sweetness of the Christian Portuguese connection with this country, and on another visit I was pleased to hear that it was the Portuguese who brought the Christian faith to their country and taught them to write. language; and I, who knew how to pronounce even the most difficult sounds. Disguised lusophony?

Mourinho has already spent $ 150 million on Portuguese. Rui Patricio next

See also  Coronavirus: If the United States is my patient

See also  Column: California gas tax will rise again. You must be happy