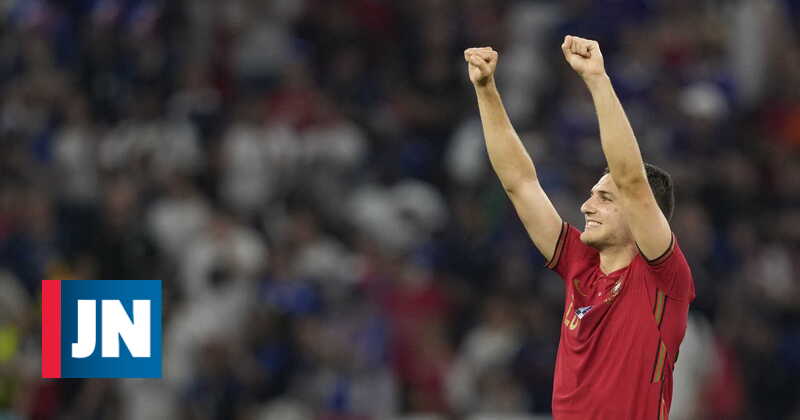 Euro 2020 is still halfway through, but it has already become unforgettable for Diogo Dalot. After a surprise call to Euro 2020 while he was on vacation, the young right-back made his national debut this Wednesday and soon reached the round of 16.

The 79th minute of the match against France (2: 2) will remain in Diogo Dalot’s memory, as the moment he first won the Portugal national team for the national team, on a night he defined as “perfect”.

“We knew it was a tough game against strong opponents, we could react when we conceded a goal, which is also important, and combined with the opening, it was a great night,” said the player who stood out this season. with Milan on loan from Manchester United.

The defender said that “reaching the next stage was the goal of everyone,” noting that the group will now have the opportunity to study the opponents who will follow them.

“We will have time to analyze Belgium, now we will have time to recuperate, since there are only a few days between games, these games are very demanding, and we must prepare the whole team, and at that time, we will be ready for Belgium,” he assured …

Diogo Dalot also revealed what Fernando Santos told him a few minutes before his debut. “The coach asked me to defend, defend the result, possess the ball, and I like helping the team,” he explained.

During the match, the fans at the stadium, the vast majority from the host country, demonstrated not only what was happening within the four lines in Budapest, but also the development of the Hungary vs. Germany match in Munich. A situation that the defender downplayed: “The message was conveyed, difficult to understand due to the noise of the game and the environment, but we did our job very well.”

See also  BALL - "What Sergio Conceição did, no other coach could do" (FC Porto)

Calmed down, Diogo Dalot used social media to express what was in his heart and soul. “Present day [quarta-feira] it will forever remain in my memory, like the day when I made my dream come true. What an honor to represent your country at the final stage of the European tournament and get a pass to the 1/8 finals. Thank you all for your support. On the pitch, we feel each of you, ”the player wrote.

Straw and a lesson against Germany

The Sporting midfielder was pleased with the contribution he made to the national team against the French national team. “I gave my best, this is also what the manager asked me to do, I did my job,” he stressed.

Regarding the match, João Paligna stressed that “the group should be congratulated.” And he made excuses: “We managed to achieve our goal – to move to the next stage. It was a tense game with two great teams. We had a great game and now we are thinking about the next one. “

For the player, who is also making his European debut, the match in Munich last Saturday was difficult to read, but it served the team to develop. “These are different games, different teams. The game in Germany served as a lesson for us to fix certain aspects in terms of tactics and everything else. This was also seen in this game, the improvements were noticeable, ”he said.

On the path of Portugal is now Belgium, an adversary that, like everyone else, will be difficult. “Belgium has one of the best teams in Europe, but we have the strength, we want to move forward step by step, and the future will certainly be bright,” he said.

See also  A BOLA - Mourinho warns: "We are not claimants" (Rome)

The Wolverhampton goalkeeper also analyzed the next corner hurdle. “This is a tough opponent. We are at the European Championship, we know that every match is difficult, and we are sure that it will be a very difficult match, like any other match, but we will do everything to beat Belgium and move on. the next stage, ”he guaranteed.

“We are here to win, and this is what makes us be here every day to train and develop, and with the support of all the Portuguese who strive for us, we want to bring us more joy,” he concluded.

Lukaku, De Bruyne and the unknown danger. Who is this Belgium? – Observer

See also  A BOLA - Mourinho warns: "We are not claimants" (Rome)
Continue Reading