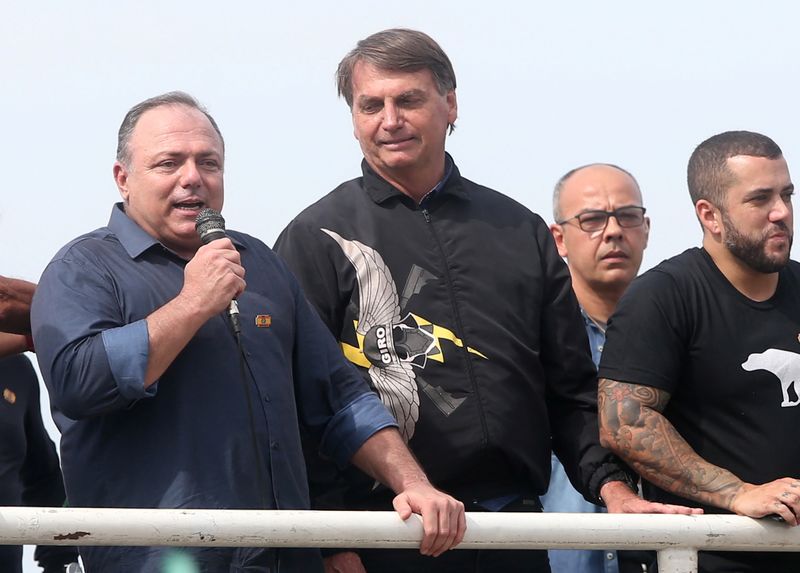 Marked by an unsuccessful job as health minister and under the gun of the CPI Covid in the Senate, General Eduardo Pasuello sought refuge from supporters at a political event in Rio de Janeiro in late May. Together with President Jair Bolsonaro, the active general and former minister spoke into the microphone and quickly turned their personal crisis into an institutional one.

The disciplinary regulations of the army consider the manifestation of active soldiers on issues of a party-political nature as a violation. By taking part in the act, Pasuello could face possible punishment from the military or shame for his commanders, retired military generals and academics say.

Ten days after Pasuello took part in the demonstration with the president, the army remains silent.

Bolsonaro appointed Pasuello on Tuesday as Secretary of Strategic Research at the Secretariat for Strategic Affairs (SAE) under the President of the Republic, months after he was replaced as Minister of Health during the deadly COVID-19 wave in Brazil.

For warlords worried that the military is too connected to an unpopular government and its indecisiveness in the fight against the pandemic, the Pasuello case is a wake-up call. This move with the president and general suggests to some officers that loyalty to Bolsonar is beginning to supplant military protocol.

“The overwhelming majority of those with more responsibility do not understand that the president has the power to forgive Pazuello and that this will harm the military establishment, attack discipline and hierarchy. This is illegal interference, ”retired general Paulo Chagas said.

“Some servicemen have a personality cult prevailing. When he speaks to Bolsonaro, they think he has become a divine order. But there aren’t many, ”added Chagas, who campaigned for the president in 2018, in an interview with the Army Officers’ Club in Brasilia.

Even Vice President Hamilton Mouran, a retired four-star general, has called on Pazuello to be enlisted and transferred from active duty to the army reserve “to avoid anarchy in the military.”

Neither the army, the defense ministry, nor the Planalto Palace responded immediately to requests for comment on this analysis.

The new tension between the military and Bolsonaro, who retired from the army as captain in 1988 before embarking on a political career, emerges just two months after he unceremoniously fired the defense minister and three heads of the military.

Bolsonaro also appointed several active and retired army officers to his government, including nearly a third of his ministry and thousands of other well-paid positions, further blurring the line between government and military.

The President appears to be seeking to erase this distinction. Defending the military dictatorship in Brazil from 1964 to 1985, Bolsonaro often referred to the Armed Forces as “my army” and suggested that they could send troops to challenge the restrictions imposed by state governments to slow the pandemic.

Brazil has lost more than 467,000 lives to Covid-19, and public health experts blame Bolsonaro’s attacks on social distancing, disregard for the use of masks, and skepticism about vaccines due to more deaths outside the United States.

After Bolsonaro fired two health ministers for refusing to approve untested treatments for Covid-19, he found a more accommodating minister in Pasuello who had no public health experience.

But the general missed the chance of an early vaccine delivery and was caught off guard by the second deadliest wave of infections this year. Deaths from the coronavirus rose from 15,000 to nearly 300,000 under Pasuello’s supervision, and he faced serious questions at the Senate CPI examining how the government dealt with the pandemic.

As the military seeks to part with this tarnished reputation, commanders should soon move Pasuello to the reserve, said Paulo Kramer, a policy professor at Brasilia University who meets regularly with army officers.

Since the fall of the military dictatorship, the military has tried to stay out of politics and has established rules prohibiting officer involvement, Kramer said.

However, it will be more difficult to remove from the government a legion of other military personnel who are accustomed to pay and other benefits of public service.

Having crossed so many boundaries, the generals are struggling to return the genie to the bottle.

“All those in charge are concerned that this will set a precedent. The army is a government agency, not a government. All officers are aware of the importance of not confusing politics with state institutions like the military, ”said retired general Roberto Paternelli, who was elected in 2018 as a federal deputy from the PSL and then the Bolsonaro party.

General Chagas added: “In the barracks, when politics enters through one gate, discipline leaves through another.”

+ The lemon squeeze trick is becoming a social media craze
+ Woman pretends to be an FBI agent to get free food and goes to jail
+ Digital blue zone in SP changes on the 16th; see how it looks
+ Research Shows The Healthiest Rice Cooking Method
+ Could a strong belching be a health problem?
+ Shark caught in Massachusetts with the remains of young people missing in the stomach
+ Cinema, Sex and the City
+ Discovered a 6,500-year-old copper workshop in the desert in Israel.

See also  For Rodrigo Garcia, Pais loses a charismatic and sensitive leader, and he is a great friend.