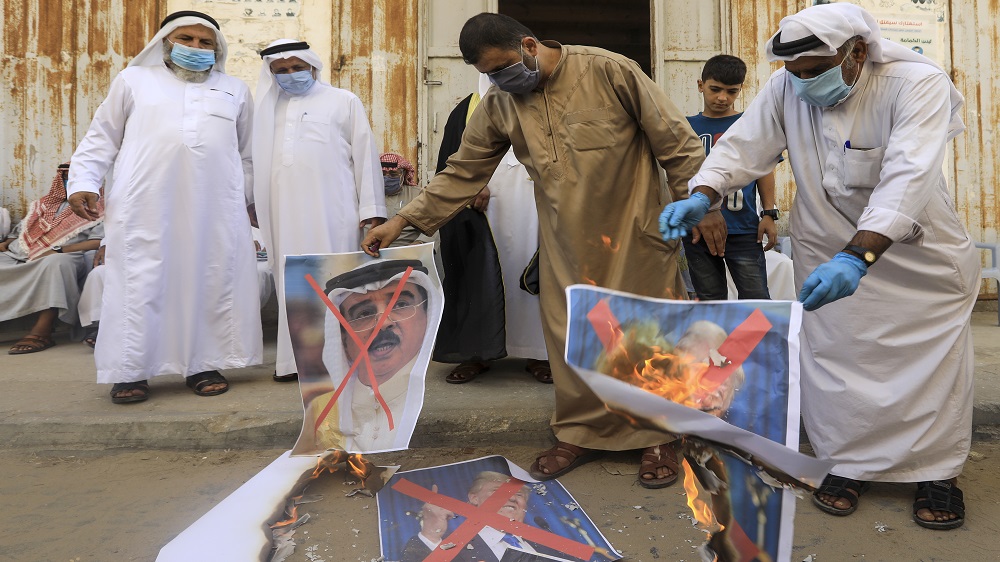 On Saturday, Palestinians in Gaza burned photographs of the leaders of Israel, America, Bahrain and the United Arab Emirates in protest against the actions of the two Gulf countries to normalize relations with Israel.

Bahrain on Friday joined the UAE in agreeing to normalize relations with Israel, a move driven in part by widespread concerns over Iran, but which could leave Palestinians even more isolated.

The protest rally in Gaza, in which several dozen people took part, was organized by the ruling group Hamas.

“We must fight the virus of normalization and block all its paths before it can prevent its spread,” said Hamas spokesman Maher al-Holi.

While the United States, Israel, the UAE and Bahrain welcome diplomatic moves as an important step towards peace and stability in middle Asia, Palestinians see this as a betrayal.

They fear a weakening of the long-standing pan-Arab position, which calls for Israel’s withdrawal from the occupied territory and the acceptance of Palestinian statehood in exchange for normal relations with Arab countries.

Despite deep political divisions that erupted in 2007, Palestinian President Mahmoud Abbas, whose Palestinian Authority (PA) has limited rule in the Israeli-occupied West Bank, and his Hamas rivals have banded together against the actions of the Gulf states.

In the West Bank, Palestine Liberation Organization (PLO) Secretary General Saeb Erekat said a diplomatic push would not lead to peace unless the long-standing Israeli-Palestinian conflict was resolved.

Meanwhile, Iran said on Saturday that Bahrain’s move meant it would be complicit in Israeli policies that threaten regional security, Iranian state television reported. Iran’s Islamic Revolutionary Guards said Bahrain would face “brutal revenge” from its own people and Palestinians for the actions of the Gulf State.

Turkey also condemned the deal, saying it undermines the Palestinian cause and “will give Israel courage to continue its illegal actions … and attempts to make the occupation of the Palestinian territories permanent.”

Bahraisans, who opposed their government’s agreement to establish diplomatic relations with Israel, expressed their disappointment on social media Saturday, highlighting the difficulties of rapprochement between the Gulf countries. with Israel…

Bahrain, a Sunni-ruled kingdom with a large Shiite population, shares a deep enmity with Israel with Iran and relies on the United States to deploy its Fifth Fleet in a tiny but strategic archipelago.

Bahraini Foreign Minister Abdullatif bin Rashid al-Zayani said the deal represents a historic step towards peace in the Middle East, but the PA and Hamas condemned it as “another stab in the back” of the Arab government.

Unlike the UAE, opposition to normalization is deeply rooted in Bahrain, which has a history of open politics, even if it has been suppressed over the past 10 years.

Former MP Ali Alaswad wrote that it was “a rainy day in the history of Bahrain.”

The kingdom – a small archipelago nestled between regional rivals Saudi Arabia and Iran – has been hit by waves of unrest since 2011, when security forces suppressed Shia protests demanding reform.

Opposition group Al-Wefaq has criticized the deal to normalize relations.

“The agreement between the despotic regime in Bahrain and the Zionist occupation government is a complete betrayal of Islam and Arabism and a departure from Islamic, Arab and national consensus,” reads a tweet.

Other opposition groups based in Bahrain and abroad have expressed their anger in statements sent to the media, calling the deal “shameful.”

“But I don’t think they are more upset with the Arab world as a whole than in the past. Palestinians have always complained that the Arab world did not support them as they should, ”he said. Nusseibeh.

The Palestinian cause has already become less central as the region has been rocked by a wave of Arab events, the war in Syria and a bloody attack by the armed group ISIS (ISIS).

At the same time, animosity has grown between Saudi Arabia and Iran.

“The Arab world has had all kinds of problems – disputes, revolutions, civil wars, tensions between various Arab countries,” said Palestinian analyst Ghassan Khatib. “The Palestinians are now paying the price for the deterioration of Arab unity.”

The PA supports the validity of the so-called “Arab consensus” and rejects the idea of ​​its isolation. For a long time, there has been a consensus that Arab states will normalize relations only if Israel fulfills a number of conditions.

One of the demands is that Israel withdraw from the territories it occupied in the 1967 Six Day War.

Another is to agree to the creation of a Palestinian state with East Jerusalem as its capital, and the third is to find a just solution for the millions of Palestinian refugees and their descendants.

See also  An organized crime journalist shot in the head on a street in Amsterdam.

“We hope the Arab countries remain committed to this consensus,” said Jibril Rajoub, a senior Palestinian official, adding that deviating from it “will get you nowhere.”

“Those who violate the Arab consensus … will be isolated in the long run,” he warned.

One Western diplomat, who asked to remain anonymous, agreed that at the moment “the Palestinians really have no choice.”

“They are also stuck because of those who want to support their cause, be it Turkey or Iran.”

The Palestinian cause has also received support from Turkey, a regional power that is increasingly at odds with Israel and militarily supports a faction that rivals the UAE and Egypt in the war in Libya.

“Turkey really has ambitions to lead this case, and it points to the hypocrisy of both the Arab states and the West, which do not pay enough attention to this issue,” said Gallia Lindenstrauss of the Israel National Institute for Security Studies.

Rajoub insisted: “We do not ignore any country. Turkey is a regional superpower, it is an Islamic country, and we are on good terms. We will continue to cooperate with everyone. “

But Khatib argued that the Palestinians should keep their distance. “It is unwise for Palestinians to fall into the trap of regional tensions and competition between regional superpowers,” he said.

Kangana Ranaut meets with the governor amid an altercation with Shiv Sena over Sushant Rajput, PoK

See also  Covid-19: Portugal has 14 cases of Omicron variant out of 59 in Europe - News