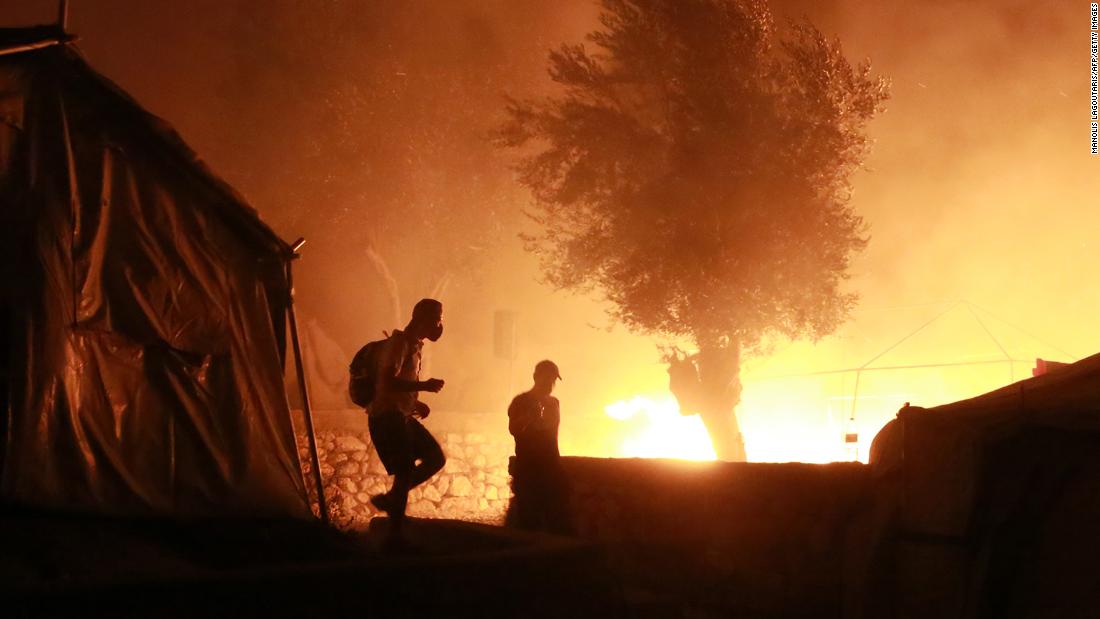 Firefighters are trying to contain a fire in a refugee camp, home to some 13,000 people, more than six times the maximum capacity 2200 people. According to the UN Refugee Agency, over 4,000 children live in the camp, including 407 unaccompanied minors.

No injuries have been reported yet, and authorities said they are still assessing the extent of the damage. Georgy Mutafis, a land photographer, told Greek TV station Mega that the camp was “completely destroyed.”

According to Greek authorities, the cause of the fire remains unknown. The camp is closing after 35 people tested positive for Covid-19 earlier this week. Local media speculated that the fires may have been started on purpose.

Migrants in the field also report that the fires were started by refugee protesters when a demonstration broke out over isolation measures.

“Last night, some people living in the camp were unhappy with the quarantine. They started a small fire. So, the police came and used tear gas. And then the fire intensified and we had to flee, ”said a camp resident who refused to reveal his full name for security reasons.

“The whole camp was burned down. There’s nothing there. I am standing on the street, near the camp, there are many people here. There is also the police, but they do not tell us where to go, ”said the resident. “We have no food or water. They say wait here. It’s very hot today, there are women and babies. ”

“They set fires everywhere,” said Muzangueno. “Everything quickly deteriorated. The police did not contain the situation. ”

Greek Prime Minister Kyriakos Mitsotakis held an emergency meeting on the fires. In an interview with the state public broadcaster, government spokesman Stelio Petsas said a state of emergency was being declared on the island and that Moria residents would be banned from leaving the island due to concerns about the coronavirus.

Petsias said reports of arson and other possible causes are being investigated.

“In the evening, the anger and despair of the refugees interned in Moria flared up,” the German charity group Mission Lifeline said in a statement.

“First, at the Covid19 station in the camp, there was a dispute, which spread throughout the entire territory at night. The security forces used tear gas, ”the statement said. “Most of the houses burned down. The homeless fled to the surrounding olive groves. ”

Axel Steier, co-founder of Mission Life, said he had warned that the situation would “escalate” due to poor conditions in the camp, calling the isolation measures “the last straw.”

“People in Moria are under intense psychological stress. The closure of the camp was the last straw, ”Steier said. “Refugees in Moria are not treated like human beings.

“Among other things, we have asked the (German) federal government over and over again to evacuate all people from the Greek camps. But almost nothing happened, ”Steier added.

Camp Moria stretches from the main UN camp to the olive groves, where thousands of people live in makeshift wooden huts, which they have built from wooden pellets and tarps hammered in with nails. Residents say they wait for hours to use the toilet and sometimes queue up for food all day.

when CNN reported from camp in MarchThere was a strong smell in the air, the river was strewn with debris, and campers staged almost daily protests at the island’s main port, demanding transportation to mainland Greece.

Moria’s migrant residents said Wednesday that they were in a state of uncertainty, awaiting instructions from the authorities among their charred belongings. “We weren’t told anything. Nobody showed up, ”said Muzangueno. “We are here and waiting.”

In a statement Wednesday, the UN refugee agency said they sent their personnel to the ground and offered assistance to the Greek authorities.

“UNHCR, the UN Refugee Agency, regrets the fire that largely destroyed the Registration and Identification Center (RIC) of Moria last night and thanks the local authorities, including the fire and emergency services, who helped contain the fire and helped people “, The statement said.

“What is happening in Moria is a humanitarian disaster,” Maas tweeted. “As soon as possible, we must clarify with the EU Commission and other EU countries wishing to help how we can support Greece. This includes the distribution of the runners among those who are ready to receive them in the EU. ”

Coronavirus: “We must act” to prevent re-blocking, the prime minister said

After the surrender at Azovstal, the fate of Ukrainian soldiers is unclear – Obozrevatel

The withdrawal of hundreds of Ukrainian soldiers who had been at the Azovstal plant in Mariupol since the beginning of the war raised the question: what was the fate of those who surrendered? Ukraine has announced that a prisoner exchange will take place, while Russia is showing signs that the men, who remained for months at the factory in Russian-controlled territory, have another destination.

On the day of the surrender, the Deputy Minister of Defense of Ukraine confirmed the withdrawal of 53 soldiers who needed medical attention and another 211 soldiers who were inside the Azovstal steel plant. All were transported to regions controlled by the troops of Vladimir Putin.

Although a Ukrainian official said the aim is to exchange these soldiers for Russian prisoners of war, the Kremlin’s position is still unclear, especially after one of the deputies involved in the peace talks with Kyiv came to defend the death penalty for soldiers withdrawn from Azovstal. .

Give up? In total, 264 soldiers were withdrawn from Azovstal. The army said it had “completed” the defense of the plant

If Kremlin spokesman Dmitry Peskov assured that the soldiers would be treated “in accordance with international standards,” then so be it. that Russia should “think well” about imposing capital punishment on the members of the Azov battalion, who have now been withdrawn from the Azovstal metallurgical plant.

“They do not deserve to live after the heinous crimes against humanity that they have committed and that are constantly being committed against our prisoners,” he said, quoted by Reuters.

Already on Tuesday it became known that on May 26 the Supreme Court of the Russian Federation will decide on the recognition of the Azov battalion as a terrorist organization. According to the Interfax news agency, cited by the BBC, it will be Russian justice that will “judge the nationalist paramilitary association Azov, deciding whether it is a” terrorist organization “.

According to the Russian news agency RIA, Russian MP Sultan Khamzaev also said that “all nationalists should be convicted for the grave crimes they have committed” and sentenced to “life imprisonment.”

Azov. Neo-Nazis or Russian propaganda? History and ideology of the battalion that survived in Mariupol

Russian President Vladimir Putin will be so involved in the war in Ukraine that he will make military decisions, which are usually the responsibility of colonels or brigadier generals, usually leading teams of 700 to 900 troops, Western military sources cited by the British press office said. Click.

According to the BBC, citing an anonymous military source, both Putin and the head of the Russian Armed Forces, Valery Gerasimov, are involved in the military decision of this level in the Donbass, directing the movement of troops on the ground. This region is currently the center of the Russian offensive, but the troops fail to capture the cities.

british diary Time According to one source, Putin making these kinds of decisions can be compared, for example, to the founder of Amazon delivering packages to the company. “Jeff Bezos does not give orders, he makes strategic decisions,” the source said.

This level of participation would be counterproductive and could contribute to what is seen as Russia’s military failure in its offensive in this region.

Ben Barry, Brigadier General of the British Army and analyst at the International Institute for Strategic Studies, for his part, commented on the daily The keeper: “The head of government should have other things to do, more useful than making military decisions. I have to develop a political strategy, and not deal with day-to-day business.”

Russia operates a chain of command with more orders from above than the British or American armies, with instructions usually sent to generals on the ground. During the invasion of Ukraine, a distinctive feature of the actions of the Russian army was generals closer to the front lineso that orders are carried out by demoralized troops. As a result, according to the Ukrainian military, at least 12 people died.

In data published in late March on the first month of the war in Ukraine, Russia admitted that 1,351 soldiers were killed in Ukraine and another 3,825 were wounded – Western estimates give figures ten or even 20 times higher, the report continues. Guardian. After the end of March, the Russian authorities no longer provided figures, speaking only of “significant” losses.

“We are doing everything possible to save the crew” – Observer

The Ukrainian Armed Forces shared on their Facebook account an audio recording of the last moments of the crew aboard the Moskva, the Russian warship that successfully attacked Ukraine.

“Moscow-1, two holes! The propeller has stopped! The ship is sinking and lying on its side“, His one of the crew members can be heard speaking in the audio, according to the New York Post. Russian warship was April 14 blowin the Black Sea, eventually sank.

The first pictures of the ship “Moskva” after the Ukrainian attack. Sailor’s mother reveals ‘terrifying’ scenario

On the recording, so far according to the New York newspaper, the sailor reports that a hole in the ship’s hull below the waterline will cause the ship to turn 30 degrees.

The Ukrainian military has published an audio recording of the death of the cruiser Moskva. In the audio recording, a crew member says that the ship was hit twice and that it lists on its side. On April 14, the flagship of the Russian Black Sea Fleet Moskva sank. https://t.co/4a3RjjRpab

There is no way to get to the tugs. We are doing everything we can to save the crew.”

The battleship Moskva, built during the Soviet Union, was one of the main assets of the Russian fleet. Ukrainian forces provided the ship was hit by Neptune missiles.. Then the Russians said that the flooding was due to a fire on board, without specifying the cause of the fire.

Rocket “Neptune”: Ukrainian ace who sank the “Moscow”, the pearl of the Russian fleet

See also  Germans will be "vaccinated, cured or die" by the end of winter, health minister said | COVID-19
Continue Reading