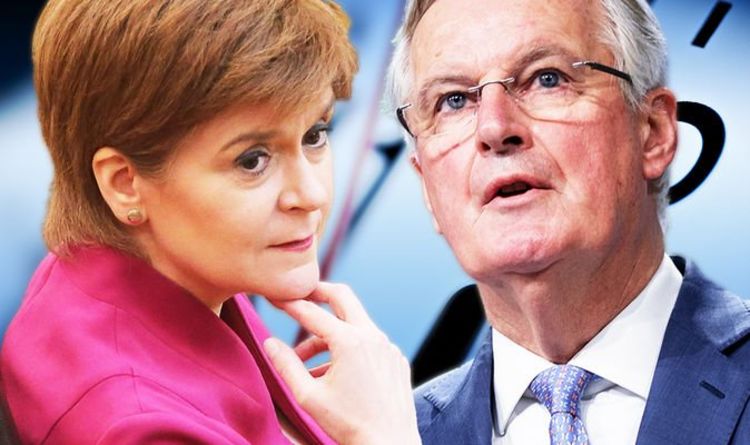 Boris Johnson has set a five-week deadline for negotiating a free trade agreement to reach an agreement, or for both parties to agree to an agreement when the current transition period ends at the end of the year. But senior Scottish officials reacted with dismay after it was revealed that the government was ready to introduce new legislation that could overturn key elements of the Withdrawal Agreement that secured Britain’s exit from the bloc in January.

Downing Street said the government is offering “limited clarifications” to the law to ensure that ministers can maintain the achievements of the Good Friday Agreement in the absence of a deal.

Now the SNP leadership in Scotland is considering options for cooperation with Europe amid fears that Lord Frost and his negotiating team may abandon negotiations without a deal.

Express.co.uk understands that the Scottish government could potentially seek warmer discussions with Brussels about their future relationship due to concerns about an increase in no-deal.

A Scottish government source said it was “necessary to respect the will of the Scottish people,” adding that future relations with the EU are “important.”

When asked about Scotland’s relationship with Brussels, Mr. Russell told Express.co.uk that Holyrood is committed to “productive dialogue with everyone we work with.”

He stressed: “We are very sorry that it is so difficult at this time to do this with the UK government, which seems to want to dominate rather than debate.

“Nobody cares about the absence of a deal.”

The Holyrood bill could provide continuity for a provision that would otherwise be lost with Brexit, and also includes provisions to ensure that EU environmental principles and governance in Scotland are preserved.

In part, this could lead to the creation of a new body called the Environmental Standards of Scotland to ensure compliance with environmental laws.

Fergus Match, head of the Eu + Me campaign, a cross-party campaign to keep Scotland in the EU supported by the majority of Scotland’s political elite, said: “The Prime Minister’s determination to bring the country so dangerously close to the abyss. “No deal” is as reckless as it is deeply troubling.

“Let’s be clear: under no circumstances will this be a ‘good outcome’.

“A tough Brexit means economic disaster before we hit the global pandemic. Now the consequences are unthinkable. “

Earlier this summer, First Minister Nicola Sturgeon and Mark Drakeford wrote to Boris Johnson asking for an extension of the Brexit process.

Ms Sturgeon believes it takes more time to complete negotiations and support business by recovering from the coronavirus pandemic.

Mr. Russell made it clear that the UK government is now “racing towards a disastrous Brexit outcome in the midst of a deep recession and global pandemic.”

He added: “With talks with the EU due to resume tomorrow, the UK has put itself in a position where it can get out of the transition with one of two dire results – either a low deal or no deal. Either it will undoubtedly hit jobs in Scotland and the Scottish economy hard. ”

He stressed that Scotland’s interests “suffer as the entire UK government is mired in chaos and confusion.”

He concluded by saying, “The Scottish Government remains firmly convinced that the people of Scotland have the right to choose their future and are determined to do so.”

A UK government spokesman said: “At all stages, we have made it clear that we want the best possible outcome for the whole UK.

“We will continue to work with the autonomous administrations to agree on a modern system of support for enterprises, jobs and trade in a way that benefits all members of the Union.”

Fraud and error has sent up to £ 3.5bn in vacation money to the wrong places