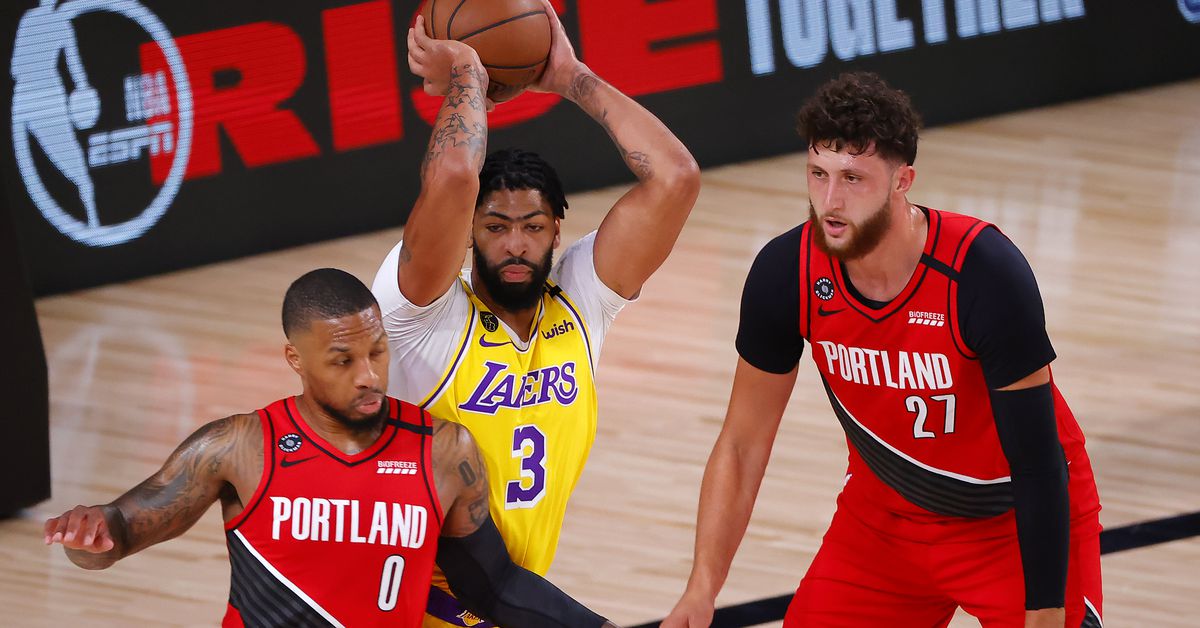 The Portland Trail Blazers head into Game 3 licking their wounds after suffering their worst loss in Orlando’s bubble. The Los Angeles Lakers held Portland to their lowest score since December 2018 in a 111-88 beat down. Damian Lillard led the way for Portland with 18 points, but made only one of his seven three-point attempts. Lillard left the game in the third quarter with a dislocated finger on his left hand. Lillard is expected to play in Game 3, but will be wearing a splint.

Anthony Davis led the way for the Lakers with 31 points and 11 rebounds. The totals aren’t much different from his 28-point, 11-rebound performance in Game 1, but he was much more aggressive and efficient and didn’t settle for jumpers. Los Angeles beat Portland in pretty much every aspect in Game 2. The only upside for Portland from Thursday’s game was that it allowed Terry Stotts to rest the starters in the fourth quarter.

What to watch for

[W]hen Caldwell-Pope is the one making the defense pay for sending extra bodies at James and Davis, he will get the credit for all the other things he does to help his team, too, from the energy he brings to the way he chases around opposing guards defensively.

“I’m really happy for KCP,” [coach Frank] Vogel said. “Both games he played extremely well. Game 2 he shot the ball well. Game 1 he didn’t. But both games he played really well. He’s a huge part of what we’ve done, he exemplifies our ‘play harder than our opponent’ mindset. He was great tonight.”

Jonathan Tjarks of The Ringer wonders if LeBron is showing his age:

Maybe this is nothing. Maybe LeBron is just saving himself for a long playoff run. The odds are that he will eventually explode for a 30- or 40-point game against a defense as poor as the Blazers’.

In his 17th season, LeBron is still big and skilled enough to dominate without being the best athlete on the floor. He did become the first player in NBA history with at least 20 points, 15 rebounds, and 15 assists in a playoff game in Game 1. But the Lakers may still have to make some concessions to his age as the level of competition increases down the line in the playoffs.

Mark Medina of USA Today wrote about the relationship between Anthony Davis and LeBron James:

“I was really down on myself after Game 1. I didn’t feel like I performed to the level I needed to,” Davis said. “(LeBron) let me have my moment and kind of get on myself and then he talked to me.”

What did James say?

“He said I was fine. He said it’s one game and as a guy who’s won multiple championships and has been in these situations before, he knows what to expect,” Davis said. “He knew what to expect from his teammates and he kind of just was there for me to kind of encourage me and keep me level-headed. Because it was just one game.”

Islanders getting all-palms-on-deck technique for battle vs. Flyers

THE BALL – Team with the most goals in Europe (England)

Fulham of the Championship (English second tier) are the team with the most goals in the European leagues, with 64 shots in 25 games. The Germans from Bayern Munich (61), the Dutch from Ajax (59), the English from Liverpool (55) and the Moldovans from Sheriff (55) follow the list, with Benfica in 9th place. (50).

Only in peripheral countries, the championships of which have already been completed (seasons correspond to calendar years), did teams have more goals: Klaksvik (99) and HB (87) from the Faroe Islands, Flora (85), Levadia ( 77 goals). ) and Paide (66) from Estonia, Dinamo Batumi (73) from Georgia, Molde (70) and Ålesund (68) from Norway and Rigas (65) from Estonia.

The second team with the most goals in the league is Blackburn with 44 goals but only one defeat (5-1 to Cardiff).

In other competitions in which they participate, summer residents scored three more goals in three games: 1-0 to Bristol City in the FA Cup and 2-0 to Birmingham in the League Cup, knocked out of that tournament by Leeds (0-0, 5-6 on penalty).

Benfica, with 2.78 goals per game, ranks sixth on average in Europe on a list that also includes Porto (48 goals in 18 games) with 2.67 goals per game.

The former leader and presidential candidate speaks of the leader’s “flagrant unpreparedness”.

The candidate defeated by Luis Filipe Vieira in the 2020 elections, Rui Gomes da Silva, this Monday launched a vicious attack on Rui Costa, who was elected in October 2021. “By Rui Costa, emphasizing that despite the “brilliant and inspiring work in four lines” it is “beyond their vulgar and boring character.”

In a text published on the Nova Geração Benfica blog titled “Benfica: disoriented, aimless and unfocused”, Rui Gomes da Silva predicts a dark future for the Eagles, the result of the “centralization of television rights adapted to FC Porto” and that “Benfica” , the main source of income from this contract, will not mind being devalued,” guessing also about the “new concrete project”: “New auditions and possibly new arrests in a few years.”

Rui Gomes da Silva emphasizes that “Benfica’s daily scandals will only cease to affect them when these obligations are exhausted and the perpetrators disappear, once and on the evil face in the newspapers, when he represents the same interests of the vulture abroad and, surprisingly, shares the same interests. the network of friendships and home visits that dominated Vieira.”

Promising to “fight all this as long as he has the strength,” the former leader, who refers to Rui Costa as a president “without a future,” shoots: “Either this path is urgently reversed, or we will move inexorably towards new elections. unfortunately, in a much shorter period of time than the partners imagine.” 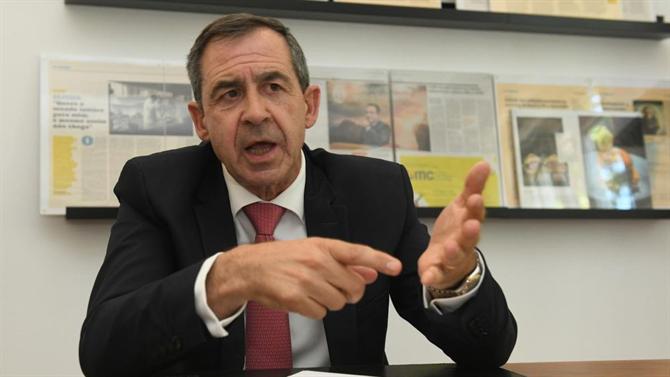 Rui Gomes da Silva, the losing candidate in the 2020 election and former Vice President of the Eagles, broke his silence months later to point the finger at Rui Costa. The lawyer criticizes the link between the Benfica president and “the same network of friends and home visits” as Luis Filipe Vieira and guarantees he will fight “against everything”.

For Rui Gomes da Silva, Rui Costa will reveal a “clear unpreparedness” to be president of the club.

“I am writing today not because of Saturday’s draw, but because of the victories of the coming weeks.

So that they (who are always in the overwhelming majority in Benfica) do not make us forget the paths followed by “our” Club!

Paths that almost everyone – with the exception of those who supported me in 2020 – considered paths that you need to walk with people who have always been there and supported!

The paths that I saw and that everyone who walked there – if they didn’t know or were conniving and/or “partners” – understood where they were going.

Or they had a duty to understand!

Or is it that, while signing everything, they never questioned anything or even suspected it? Is it possible, in the 21st century and in one of the largest national companies, for an administrator to say that he signed … without knowing what payments he authorizes? Him or any other member of SAD Management?

But I am writing – despite promising myself and my family that I will spend a year without interfering with Benfica … which I predict will coincide with the climax of this crisis and the likely calling of new elections – out of a duty of conscience!

Not to gloss over the evidence, which was very clear in an interview with Rui Costa last week for Benfica TV.

The unpreparedness of the place is so blatant that it hurts to see a figure who, while ingenious and inspiring inside 4 lines, is a vulgar and boring character outside of them!

The difficulty of expressing an idea – in a coordinated interview, prepared and rehearsed countless times – is so great that I even felt ashamed of others. It is a great sadness because Benfica as a whole has chosen this path.

Also – therefore – we must not forget who supported Luis Filipe Vieira in 2020.

Or who in those very elections, wanting to remove him from his place, thought that everything around him, from the coach to the now President, should continue. Including Domingos Soares de Oliveira.

Or who now, when we were on a tangent with the mediocre people of this world, boasted that he supported Rui Costa.

And I’m not talking about the sad ones, who at every moment say that they are shown the “windows” of this world, as the way forward!

I miss everyone else!

What does the future hold for us?

The centralization of television rights made for Porto FC, in which Benfica, the main source of income from this contract, will not mind being stripped of its value.

From what we’ve seen, a new concrete project, with a lot of real estate speculation, with new faucets and possibly new delays in a few years.

When there are no more investigations, wiretaps and arrests among those who pandered to Vieira… these daily scandals that consume us as Benfica will cease to affect Benfica only when these duties are exhausted and the perpetrators disappear – once and for all.

At the same time, Benfica’s new real estate project will have no money, and there will be no shortage of – among the new president’s new gurus – those who will tell him that his benfica will be the perfect shell to go on the quest again. , any Textor as a “savior”!

It doesn’t matter who makes pretty announcements calling for charity or makes an evil face for the newspapers when abroad he represents the same interests of the vulture and, amazingly, shares the same network of friends and home visits as Vieira.

And if Seixal started with Vale Azevedo – that an imaging machine paid for in gold did everything to make this part of our History disappear, giving the laurels to Vieira (who at some point wanted to replace Cosme Damiao in our collective memory) – here we will also surprised by the new but so unprepared and therefore without the future president of Benfica to be taken by those who were then on his side negotiating with the American to push Benfica away (or whatever was left of the adventure) by making tell me that it was his idea!

As long as I have the strength… I will fight it all!

Because I believe in Benfica, which our parents left us and which we dream of every day!

Because, by the way, we are on a path that will either change urgently, returning to Benfica’s focus of football and modalities, or we will inexorably move towards new elections in, unfortunately, a much shorter period of time than is imagined. partners.

Don’t forget, because I don’t forget that Benfica needs all of us to save themselves from those who see him as a piggy bank to fund Portuguese football.”