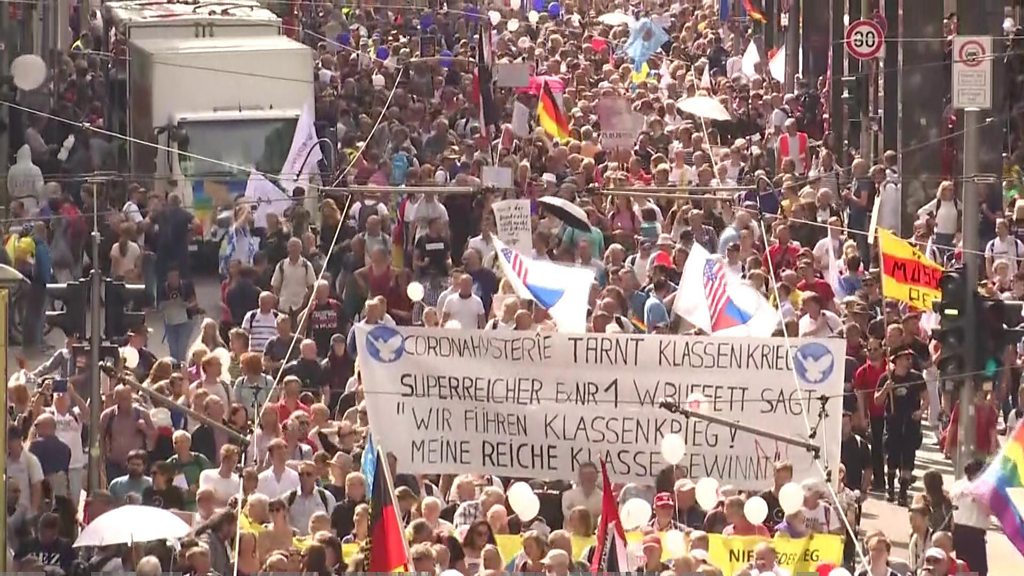 Police in Berlin have arrested 300 demonstrators during protests against Germany’s coronavirus restrictions.

Some 38,000 people took to the streets in the city for mostly peaceful demonstrations.

Later hundreds of protesters, many from the far right, tried to storm the Reichstag, the home of Germany’s federal parliament.

A number of people were arrested and German politicians condemned the attack as “shameful” and “unacceptable”.

Some of those involved had insignia from the far-right Reichsbürger (Reich Citizens) movement. Vice Chancellor Olaf Scholz said: “Nazi symbols as well as Reichsbürger and Imperial German flags have no place in the German Bundestag.”

Earlier some 200 people were arrested at one rally, which the authorities blamed on right-wing agitators who were said to have thrown stones and bottles.

Rallies protesting against coronavirus restrictions took place in other European cities with some demonstrators calling the virus a hoax.

Thousands gathered in London’s Trafalgar Square to protest against issues including coronavirus restrictions and 5G. Signs reading “masks are muzzles” and “new normal = new fascism” were held up.

What happened in Berlin during the day?

The rally had originally been banned but a court eventually allowed it to go ahead.

Police ordered one group near the Brandenburg Gate to disperse for flouting safety rules, then arrested 200 after stones and bottles were thrown.

“Unfortunately, we have no other option,” Berlin police said on Twitter. “All the measures taken so far have not led to compliance with the conditions.”

Protesters were closely packed in places, and sat together on the ground at one point.

A second group of about 30,000 met peacefully close by to hear speeches.

Among those arrested was cookery author and conspiracy theorist Attila Hildmann, who had addressed crowds through a loudspeaker.

Although Germany has so far not seen the wave of cases affecting some parts of Europe, its infection rate has been growing. New case numbers are reaching highs last seen in April.

Who was involved in the Berlin protests?

Mr Geisel said people protesting outside the Russian Embassy on Unter den Linden were “right-wing extremists” and that seven police officers had been injured.

Some protesters then broke through a cordon at the Reichstag building and were dispersed by police using pepper spray.

German news site Deutsche Welle reported that flags and T-shirts supporting the far right could be seen among the crowd.

The demonstration to the west of the Gate at the Victory Column was organised by the Stuttgart-based movement Querdenken 711 (or Lateral Thinking 711). The group has more than 16,000 followers on Facebook and communicates largely through encrypted messaging service Telegram.

It believes that coronavirus regulations infringe on basic rights and freedoms enshrined in Germany’s constitution and wants them to be lifted.

The group previously organised a protest in Berlin on 1 August dubbed the “day of freedom”. Thousands joined, including some from the far right and some conspiracy theorists who do not believe Covid-19 exists.

Mr Kennedy told the crowd at the Victory Column that his uncle had famously addressed Berlin in 1963 to counter totalitarianism and that “today Berlin is again the front against totalitarianism”, warning of a surveillance state and the power of 5G phone networks.

Photos shared online also showed flags and slogans linked to the conspiracy theory QAnon. The wide-ranging, unfounded conspiracy theory says that US President Donald Trump is waging a secret war against elite Satan-worshipping paedophiles in government, business and the media, among other claims.

Participants also included families and children. Some people have said they just want the right to protest.

Counter-protests against the main march also took place, with about 100 people at one rally. “You are marching with Nazis and Fascists,” shouted some participants, according to broadcaster RBB.

What are Germany’s Covid-19 measures?

The country was one of the most effective in enforcing the framework of response referred to as prevent, detect, contain and treat.

It has been particularly effective in keeping the death rate among the over 70s lower.

It began relaxing physical distancing in early April but continued to track infections, which have seen a rise in August.

On Thursday, Chancellor Angela Merkel and the 16 federal states introduced a minimum €50 (£45; $59) fine for failing to wear a face mask where ordered. A ban on major public events was also extended until next year.

Mrs Merkel said: “We will have to live with this virus for a long time to come. It is still serious.” She said it would become more challenging in the winter.

Germany has recorded 242,000 infections, fewer than the other major European nations. Its figure of 9,297 deaths is considerably lower than the numbers in Russia, the UK, Spain, France and Italy, Johns Hopkins University research shows.