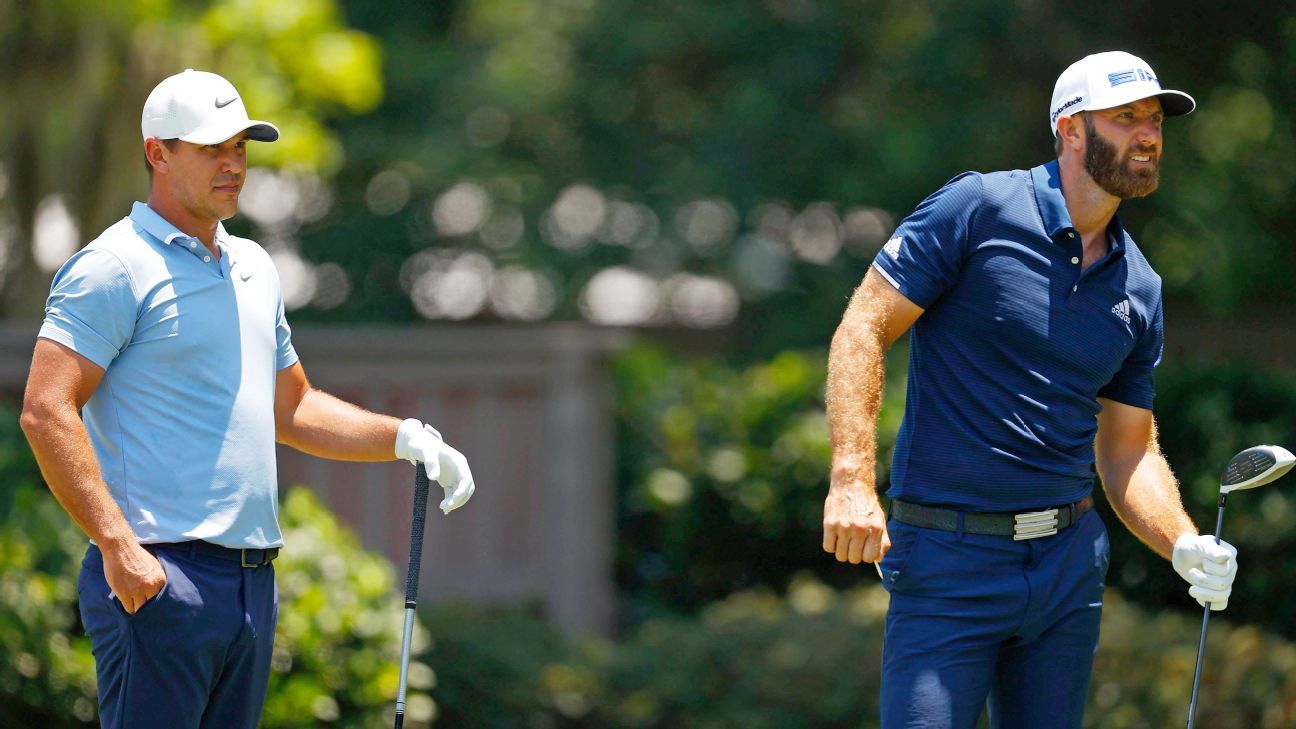 SAN FRANCISCO — A long wait for the first golf major of 2020 is being rewarded with an impressive leaderboard and numerous possibilities heading into the final round of the PGA Championship.

TPC Harding Park has proven to be a worthy test, with plenty of trouble lurking and yet opportunities for fireworks. Birdies are to be had, but balls are also to be swallowed by deep rough and Cypress trees, too.

With a similar cool forecast for Sunday, here’s a look at the contenders heading into the final round, including Dustin Johnson and Brooks Koepka, who is within reach of a third straight PGA Championship and fifth major title.

Perhaps D.J. found the key to success: a yardage book is overrated. Actually, Johnson lost his, and had to rely on his brother and caddie, A.J., for the intricate details at Harding Park. He shot 31 on the back and birdied three of the last five holes to shoot 65 — despite a double bogey at the ninth.

Johnson, 36, has now shot eight straight rounds in the 60s at the PGA Championship and is in position to win that elusive second major championship. Ten years after blowing the PGA in epic fashion — he was penalized two strokes for grounding his club in an 18th-hole bunker to miss a playoff at Whistling Straits — he has another excellent opportunity after being four back to start the day.

“I have been out here awhile now,” said Johnson, whose lone major title came at the 2016 U.S. Open. “I’ve been in contention a lot, and I’ve got it done a lot of times. [On Sunday], it’s no different. I’m going to have to play good golf if I want to win. It’s simple: I’ve got to hit a lot of fairways and a lot of greens. If I can do that, I’m going to have a good chance coming down the stretch on the back nine.”

This is new territory for Scheffler, 24, who is playing in just his fourth major championship and his first PGA. He has yet to win on the PGA Tour. Birdies on three straight holes on the back nine gave him a share of the lead prior to a bogey at 18 for a 65. He is one back of Johnson and will play with him in the final round.

“There’s definitely some nerves but just got to try and handle them as best I can and go out and play, and I did a good job of that [in Saturday’s third round] just staying in the right frame of mine, making good, positive swings and made some nice birdies,” he said.

It has been a hit-or-miss career for Champ, who has two PGA Tour victories — but only two other top-10 finishes. This is just the third major championship for Champ, 25, who tied for 54th at last year’s PGA. Champ followed his Friday 64 with a 67 and his long game is well-suited for Harding Park. But he’s a newcomer to the major pressure.

Barely a pro for a year, there is a lot of upside for Morikawa, who earned his second career victory a few weeks ago and seems unflappable at age 23. Out of college just 15 months, he plays beyond his experience. Three birdies near the end of his round helped get him in contention, just two back, after starting the day six behind.

“I had to play well,” he said. “Who knows if one of the leaders shoots 5 or 6-under and really separates themselves. To have a chance, I had to shoot a pretty good round at least. Now anything can happen to anyone.”

The Englishman has quietly hung around with scores of 68-67-68 to give himself a shot at his first major championship. Only Sergio Garcia (74) and Tom Kite (72) had more major starts than Casey (64) before winning their first. At 43, he would also be the third-oldest player behind Jerry Barber and Roberto DeVicenzo to win his first major title.

The quest for history appeared over when he bogeyed three straight holes on the back nine. But Koepka seems to never be denied in the majors, and he willed himself into contention with birdies on two of the last three holes to pull within two shots of Johnson.

Koepka is trying to become the first player since Peter Thomson won The Open from 1954-56 to win a major in three straight years. Walter Hagen won the PGA four straight times from 1924-27.

As it relates to chasing Johnson, Koepka said: “I like my chances. When I’ve been in this position before, I’ve capitalized. I don’t know, he’s only won one. I’m playing good. We’ll see.”

The beefed-up Bryson needs to avoid the numerous bogeys he continues to make if he is to win his first major championship. He’s never finished better than 15th in a major, and this is his best opportunity, just three behind Johnson. But his numerous birdies for the tournament (17) have been somewhat offset by too many bogeys (11). Still, DeChambeau has the ability and confidence to get this done.

See also  There could be 36 communicating intelligent civilizations in our galaxy, study says

Nobody is more due than Finau, who keeps knocking at the door, whether it be regular events or major championships. A third-round 67 gives him another chance but he probably needs to go lower than that with so many people ahead of him.

Rose couldn’t get much going Saturday, settling for a 70 that kept him within reach of the leaders. The 2013 U.S. Open champion has plenty of experience in big events and shot 66 in the first round here. He’ll need another one like that to have a chance.

Just two out of the lead when the third round began, Day could only manage an even-par 70 to fall three behind. Still, he has a chance to nab his second PGA Championship. The Aussie has been on a nice, quiet run of late, posting three consecutive top-10 finishes coming into the PGA

The surprise second-round leader, Li hung in beautifully for most of Saturday until his tee shot on the 13th hole seemingly got stuck in a Cypress tree, leading to a lost ball and a double-bogey 6. He added two more bogeys and had just one birdie for the round to shoot 73 and fall four strokes back. Li’s chances to become the first Chinese golfer to win a major championship likely hinged on him staying closer to the lead.

Daniel Berger and Tommy Fleetwood are tied for seventh, only three back, and certainly still within striking distance. Joel Dahmen would be an ultimate underdog winning, at age 32 playing in just his third major. He sits four back. It’s been a quiet week for Xander Schauffele, who is also just four back.

NYC protester turns self in immediately after NYPD standoff: reviews