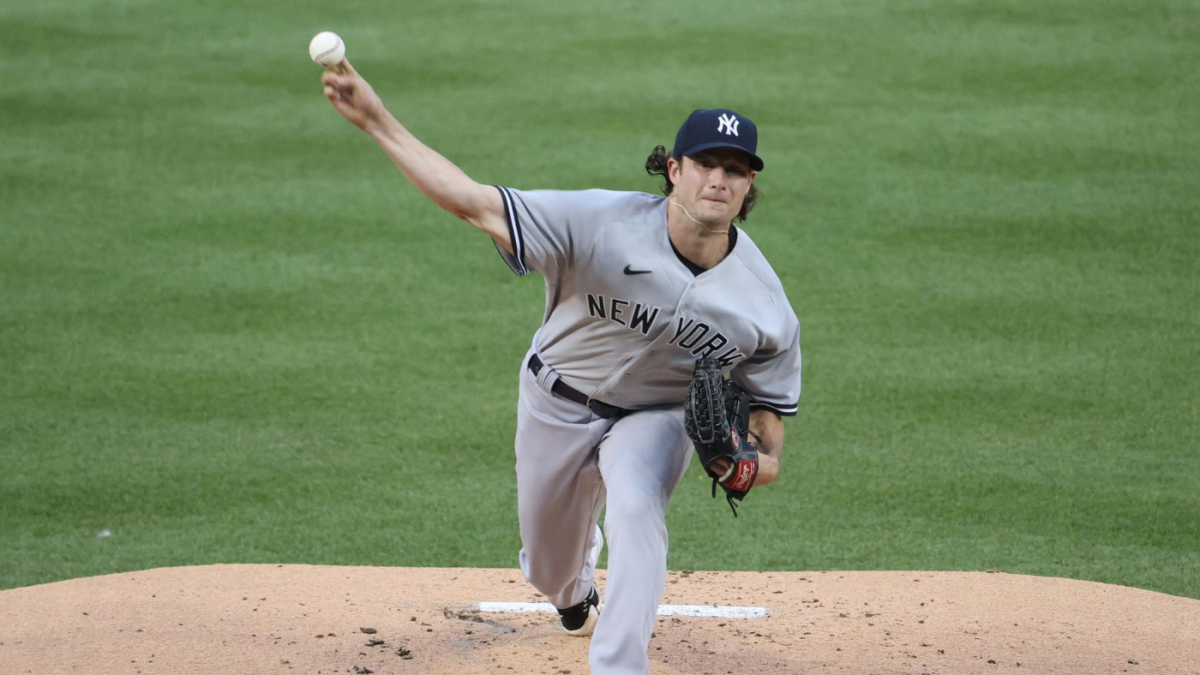 An MLB season unlike any other opened Thursday night at Nationals Park. The defending World Series champion Washington Nationals hosted the New York Yankees in Game 1 of this abbreviated 60-game season.

The Yankees wasted no time giving Gerrit Cole, their new ace, some run support. The offense put consistent pressure on Max Scherzer and New York was holding a 4-1 lead when the umpires called for the tarp with one out in the top of the sixth inning. The rain never subsided and the game was called after a two-hour rain delay. The Yankees are 1-0 (box score).

Here are three takeaways from Opening Day as the Yankees beat the Nationals in a rain-shortened affair.

Adam Eaton, the second batter Cole faced as a Yankee, hit a 406-foot home run to right field. Not a great start! Cole quickly settled down though. The $324 million man retired 14 of the 16 batters he faced after the Eaton homer, and the two baserunners were a hit by pitch and a walk. Five of the 16 struck out.

Cole missed up with his fastball consistently the first two innings, a classic indication the pitcher is overthrowing, which suggests he was a little amped up in his first start as a Yankee. He soon settled down though and was dominant through five innings, limiting the Nationals to an 89 mph average exit velocity on 11 balls in play. Weak contact all night.

See also  Florida, Texas and California account for about one-fifth of the world's new coronavirus cases

Big games for Judge and Stanton

Last season injuries limited Aaron Judge and Giancarlo Stanton to 120 games, including only 18 by Stanton. Had the 2020 season started on time, Judge and Stanton both would have been on the injured list on Opening Day. Judge was dealing with a fracture rib that dated back to last September and Stanton hurt his calf in March.

The shutdown gave both players time to heal and allowed them to be in the Opening Day lineup on Thursday. Judge recorded the season’s first hit with a solid single to left field in the first inning. Two batters later, Stanton took Max Scherzer deep for the season’s first home run and gave the Yankees a 2-0 lead:

The first homer of the new season was not a cheapie. Statcast says it traveled 459 feet and left Stanton’s bat at 112 mph. Judge’s single wasn’t too far behind at 108 mph. They made very loud contact in the first inning.

Their contributions did not stop there. Judge ripped a double to left field in the third inning, scoring the speedy Tyler Wade all the way from first base. Two innings after that Stanton poked a run-scoring single to right with the bases loaded to stretch New York’s lead to 4-1.

Judge and Stanton went a combined 4 for 6 with a double and a homer prior to the rain delay Thursday. The rest of the Yankees went 2 for 16 and one of the two hits was a bunt single.

Five days ago Scherzer was hit hard by the Phillies in an exhibition game but said afterward he wasn’t concerned. “I got beat around a little bit, but that’s good,” he said. I wasn’t concerned either. A veteran pitcher like Scherzer knows what he has to do to prepare for the season.

On Thursday night, Scherzer had a very hit or miss outing against the Yankees. The good: 11 strikeouts in 5 1/3 innings, including five strikeouts in the span of six batters at one point. The bad: four earned runs, or the same number he’d allowed in his previous four Opening Day starts combined (four earned runs in 28 1/3 innings).

Scherzer faced 26 batters before the rain delay and 10 reached base. He allowed double-digit baserunners in only four of his 27 starts last season. The four walks tied his season high from last season, which he did only once.

Dr. Fauci usually takes a break from battling the pandemic to toss the first pitch of the MLB season