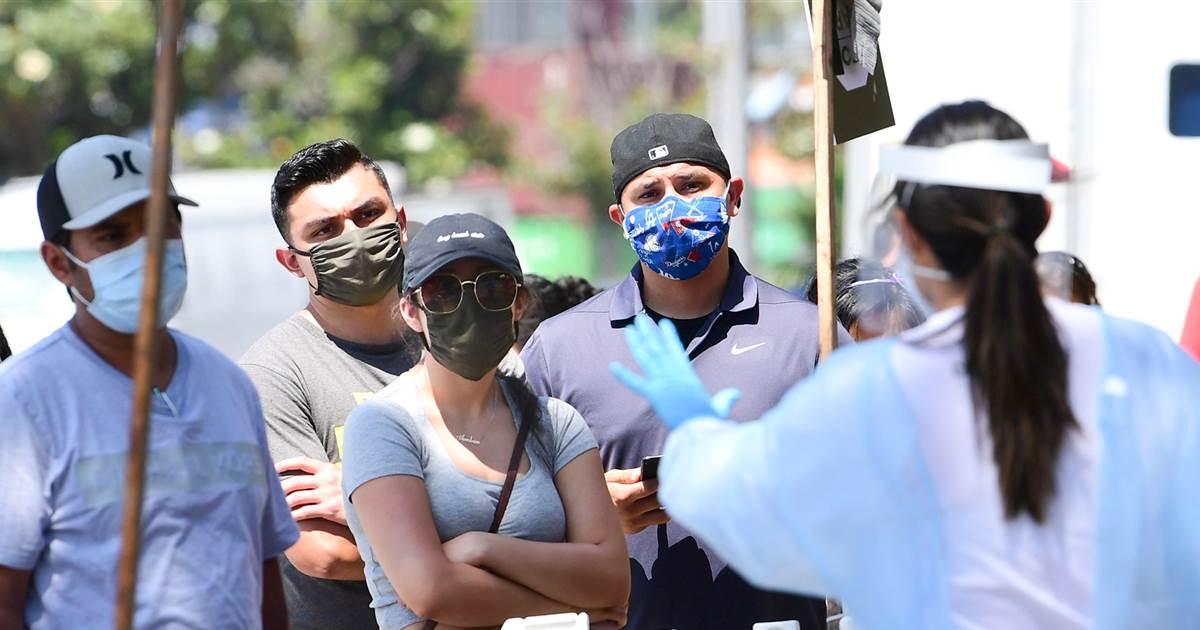 Some one in five new cases of coronavirus reported around the world came from just three U.S. states — Florida, Texas and California, a new NBC News tally revealed Tuesday.

The 27,574 cases recorded in those states Monday accounted for 18.9 percent of the global total and represented more than a third of the 61,751 new cases reported in the U.S.

Meanwhile, the two-week death total in Texas was up 99 percent over the previous two weeks.

In Florida, the two-week death total rose by nearly 84 percent and in California it jumped by nearly 27 percent.

Arizona, another state that has seen a big increase in new cases in recent weeks, reported 4,273 more infections and 92 more deaths.

Let our news meet your inbox. The news and stories that matters, delivered weekday mornings.

Texas’ Hispanic community has been especially hard hit of late and Rep. Joaquin Castro, a Democrat whose district includes the city of San Antonio, blamed President Donald Trump and Texas Gov. Greg Abbott for being “slow to test people, slow to trace the infection and slow to treat people.”

They “tried to pretend like it wasn’t a big problem because they didn’t want to end up on the news every day the way New York did, and that’s had an incredible effect on this community, and in the last three weeks, it’s really exploded,” Castro told MSBNC’s Garrett Haake.

Trump and Abbott have both been accused to not moving fast enough to combat the coronavirus and it wasn’t until this month that the Texas governor mandated wear a mask in public. Trump wore a mask for the first time in public just two days ago and earlier this month he predicted the pandemic would “just disappear.”

The staggering new sums emerged on the same day that Admiral Brett Giroir, the Assistant Secretary of Health, insisted on “Today” that “we’re turning the corner on the current outbreak.”

“We are all very concerned about the outbreak,” Giroir said. “About half the cases are in four states, Texas, California, Florida, and Arizona. But we are in a much different place now than we were several months ago, a much better place.”

And when Vice President Mike Pence arrived Tuesday in Louisiana to meet with local officials about the pandemic, Attorney General Mike Landry was not there to greet him on the tarmac because he has tested positive, local media reported.

“Out of an overabundance of caution with the Vice President coming to our state, I was tested for Cornavirus,” Landry wrote in an email to staffers. “Though experiencing no symptoms, I tested positive for COVID-19.”

“The amount of time it is taking to receive testing results is hurting the ability of long term facilities to fight the virus,” the letter states. “For nursing homes and assisted living communities to protect residents and staff, we need on-site testing with reliable and rapid results.

There was also a smidgen of troubling news out of New York, a state that back in April was posting Texas-sized case numbers and since then has succeeded in flattening the coronavirus curve.

Gov. Andrew Cuomo reported that 1.5 percent of the 60,045 COVID-19 tests performed on Monday came back positive.That is the highest positive rate in the state since June 5.

Two days earlier, the New York State Department of Health reporting there were zero COVID-19 deaths on Saturday the first time that has happened since March 13.

Today’s update on the numbers:

Total hospitalizations are at 820.

Nigel Chiwaya is a data reporter for NBC News.

Corky Siemaszko is a senior writer for NBC News Digital.