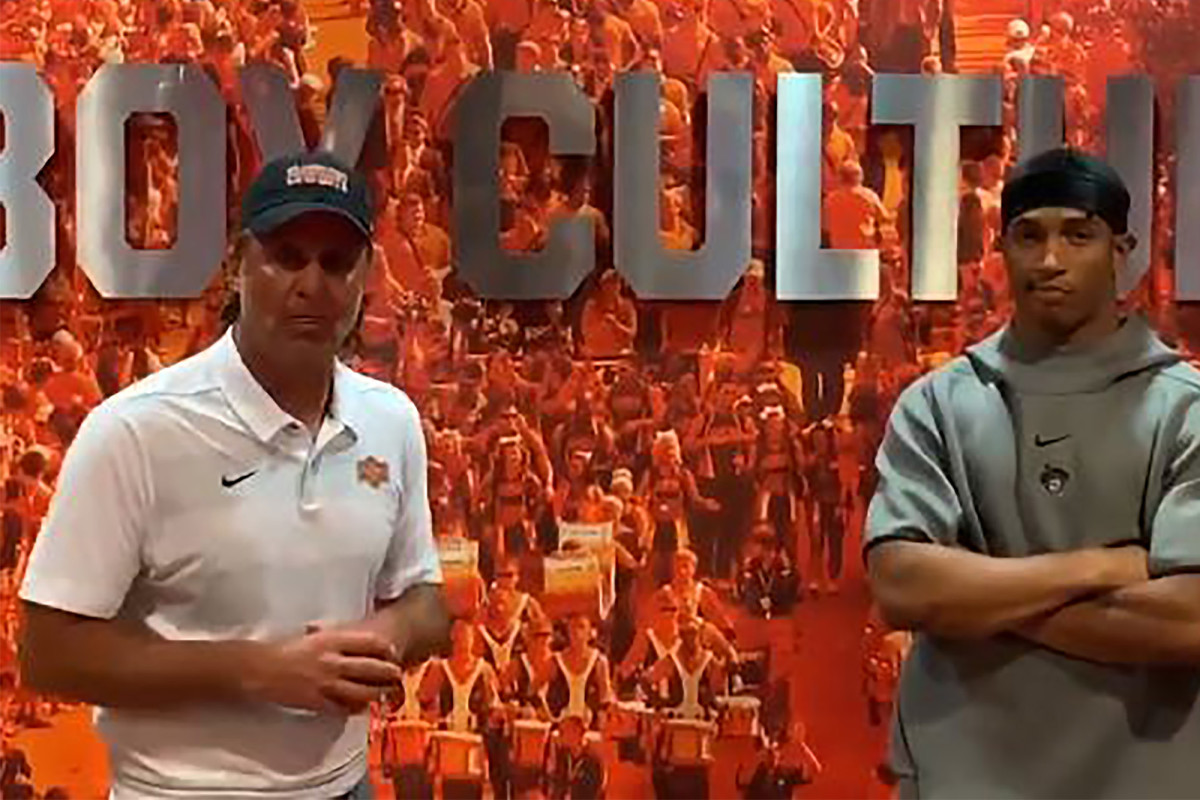 OKLAHOMA CITY  — Oklahoma State running back Chuba Hubbard and coach Mike Gundy appear to have ironed out their differences for now.

Hubbard suggested Monday he may boycott the program after Gundy was photographed wearing a T-shirt promoting the One America News Network, a far-right news channel that has been praised by President Donald Trump.

Gundy is seen in a photograph on Twitter wearing the shirt with the letters OAN. In a tweet responding to the photo, Hubbard said: “I will not stand for this. This is completely insensitive to everything going on in society, and it’s unacceptable. I will not be doing anything with Oklahoma State until things CHANGE.”

Gundy’s comments led the school’s president and athletic director to issue statements of concern and support.

Hubbard, who is black, has been more active on social media since George Floyd, an unarmed black man, died after a white Minneapolis police officer pressed his knee against Floyd’s neck for several minutes. Hubbard has been supportive of protests that erupted around the world after Floyd’s death.

Gundy and Hubbard later appeared together on a short video on Twitter. Gundy said he met with the team and will make adjustments.

“In light of today’s Tweet, with the T-shirt I was wearing, I met with some players and realized it’s a very sensitive issue with what’s going on in today’s society,” he said. “So we had a great meeting and (I was) made aware of some things some players feel like that can make our organization and our culture even better than it is here at Oklahoma State. I’m looking forward to making some changes, and it starts at the top with me, and we’ve got good days ahead.”

See also  Hillary Clinton about handling the Trump corona virus: 'I will do a better job'

Hubbard apologized for using social media to air his concern instead of going directly to Gundy.

“I’ll start off by first saying I went about it the wrong way by Tweeting,” Hubbard said. “I’m not somebody that has to Tweet something to make change. I should have went to him as a man. I’m more about action. So that was bad on my part. But from now on, we’re going to focus more on bringing change, and that’s the most important thing.”

Hubbard’s tweet revealed some issues that were bubbling under the surface. Several current and former Oklahoma State athletes supported him. Current linebacker Amen Ogbongbemiga declared “I stand with him!” and former Cowboys running back Justice Hill, now with the Baltimore Ravens, tweeted: “OSU Athletics and University need major change. 100% support brotha.”
Hubbard’s comments sent ripples all the way to the top of the university.

“I hear and respect the concerns expressed by our Black student-athletes,” Oklahoma State President Burns Hargis said in a statement. “This is a time for unity of purpose to confront racial inequities and injustice. We will not tolerate insensitive behavior by anyone at Oklahoma State.”

The discussion also got the attention of Oklahoma State athletic director Mike Holder.

“This afternoon has been very disturbing,” Holder said in a statement. “The tweets from the current and former players are of grave concern.”

An OAN commentator, Liz Wheeler, recently described the Black Lives Matter movement as a “farce” that speaks for “oppression” and “revenge.”

Gundy spoke about his fondness for OAN during a conference call with reporters in April that mostly focused on the coronavirus pandemic.

His praise for OAN followed several minutes explaining how he felt the “mainstream media” had been too negative in its coverage of what he called the “Chinese virus.” He apologized a few days later.

“I have been made aware that comments from my press conference have offended some,” Gundy said in a statement. “It was never my intention to offend anyone and I apologize. My first priority is and will always be the student-athletes and doing what is best for the program and the university.”

In that same interview, Gundy said he favored a speedy reopening of the school’s facilities, but Oklahoma State disagreed with his timetable. The school recently reopened its facilities, only to have several players test positive for the coronavirus. Ogbongbemiga said on Twitter that he tested positive after he attended a protest in Tulsa.

Gundy addressed Floyd’s death and the subsequent civil unrest in a statement on Twitter: “I’m thankful to be in an environment with Oklahoma State football and our Cowboy Culture where we respect each other. The 200 people in our family understand and appreciate diversity and have compassion for one another. I hope we replace the rage with respect and all come together.”

Hubbard was NFL draft-eligible, but he chose to return to school. He was a first-team All-American and the AP Big 12 Offensive Player of the Year last season and finished eighth in the Heisman Trophy voting. His 2,094 rushing yards was the second-best single-season total in school history, trailing only Barry Sanders’ 1988 Heisman Trophy-winning season.

Net City: Tencent is building a Monaco-sized ‘city of the future’ in Shenzhen