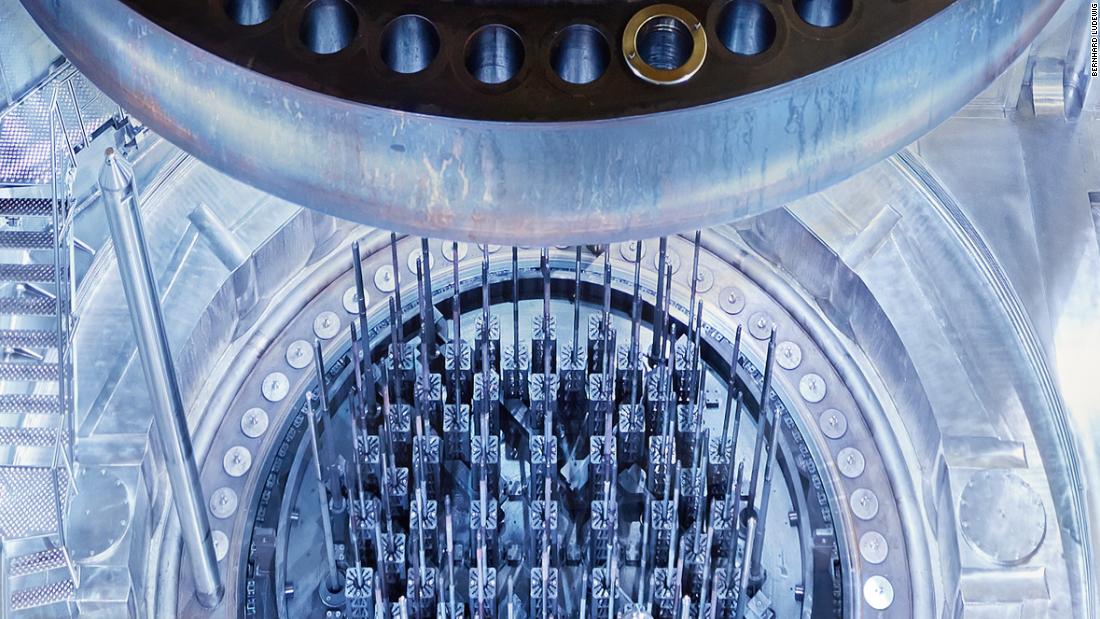 After the earthquake and tsunami triggered several devastations at Japan’s Fukushima Daiichi power plant in 2011, shock waves were felt throughout the world’s nuclear industry. More than 5,000 miles away in Germany, where the use of atomic energy has long been a matter of contention, the incident sounded like a death knell.

Chancellor Angela Merkel soon was announced that he took seven of the country’s oldest nuclear power plants. Soon after, he promised that the remainder would be permanently closed by 2022, with the country’s focus shifting to renewable alternatives.

So when photographer Bernhard Ludewig visited the nuclear plant for the first time in 2012, a year after Fukushima, he not only glanced at an inaccessible world – he documented the closing chapter in German history.

The control rod is depicted in an open reactor at the Emsland Nuclear Power Plant in northwest Germany. Credit: Bernhard Ludewig

“We chose the moment when they changed fuel rods,” he recalled this first meeting during a telephone interview. “We talked to the person who operated the loading machine and we were able to ride it right above the reactor, and I got my first photo. I saw some press photos, but it was a different matter when you were there. This is the beginning of the project.”

Ludewig then visited dozens of other sites in the following years. Through a combination of documents, persuasion and trust building, he gained rare access to some of the country’s last remaining nuclear facilities, as well as capturing ongoing demolition.

Inspired by Edward Burtynsky (a Canadian photographer known for depicting mines, oil refineries and other human interventions on natural landscapes), he decided to record a complete picture of the country’s atomic sector – not only power plants, but also research centers, training facilities and repositories for radioactive waste.

Inside the aluminum-paneled control room of the Karlsruhe FR2 research reactor that was not used. Credit: Bernhard Ludewig

The resulting photos are, sometimes, alluring. Ludewig’s focus on patterns and symmetry revealed the beauty hidden in the complex centrifuges, the retro-style control room and the towering cooling tower which he described as having a religious quality, like a cathedral.

“Sometimes a machine or object like someone – I try to take a picture of it,” he said. “You take photos and don’t think too much about what they are. You have feelings, and you follow them. And it gets smoother every time.”

Ludewig has now compiled around 300 photos into a new book, “Nuclear Dreams“Set in more than 400 pages, this is a complete survey of nuclear power, complete with diagrams, illustrations and contributing essays on physics and architecture.

The photographer also explored what he called “atomic age aesthetics” through vintage posters and equipment that claimed the benefits of the new technology. This early utopian image, inspired by movements such as modernism and the Bauhaus school, offers a clear alignment with facility images that are often faded at this time.

In the exploration mine that was drilled under the city of Gorleben, where radioactive waste can be stored permanently. Credit: Bernhard Ludewig

But Ludewig stated that he was not for or against nuclear power, but rather “neutral” who was attracted by technology that once carried promises of the future. The goal, he said, was to capture this lost world for the sake of our children and grandchildren, not to promote or criticize the country’s energy policy.

“That’s really documented,” added Ludewig, who said disagreements about nuclear power were like “civil war” in Germany. “You have two camps. It’s like Trump’s America, you are a Republican or left-wing liberal and they don’t talk to each other. Anyone who says something is considered to be for us or against us.”

While Fukushima served as a catalyst for broad public opposition in Germany, the country’s commitment to stop nuclear plants the 20th year ago. The debate about the perceived danger and lack of atomic energy is still older.

During the 1970s, left-wing protests outside nuclear facilities in the former West Germany were common, and often resulted in clashes with police. Proposals to dump radioactive waste in the salt mine in Gorleben have made the small town a hotspot for demonstrations ever since. (Ludewig’s book includes photographs of exploration mines drilled under Gorleben as part of Germany’s ongoing search for permanent answers to its nuclear waste problem).

The Ludewig project also took him to the Chernobyl Nuclear Power Plant which was abandoned in Ukraine today. Credit: Bernhard Ludewig

But for Ludewig, the real “turning point” is Chernobyl. The 1986 disaster – which sent radioactive falls across Europe, caused a surge in cancer rates and leaving an area of ​​1,000 square miles in Ukraine today which is largely uninhabitable – fundamentally changing the debate in Germany. Soviet-designed facilities in the east of the country, such as the Greifswald Nuclear Power Plant, were deactivated after the country’s reunification. And no new nuclear power facilities have been built in Germany from the 1990s onwards.

So like visiting sites in Finland and Brazil, Ludewig also made a pilgrimage to the Chernobyl Exclusion Zone to paint a more complete picture of the industry. The photos he returned, including frightening images from the control room that had long been left behind, helped give objectivity and balance to the project, he said.

“If you publish hundreds of images of nuclear power that show hidden beauty, and you don’t show havoc, then that won’t be honest.”

The artist Christo died at the age of 84