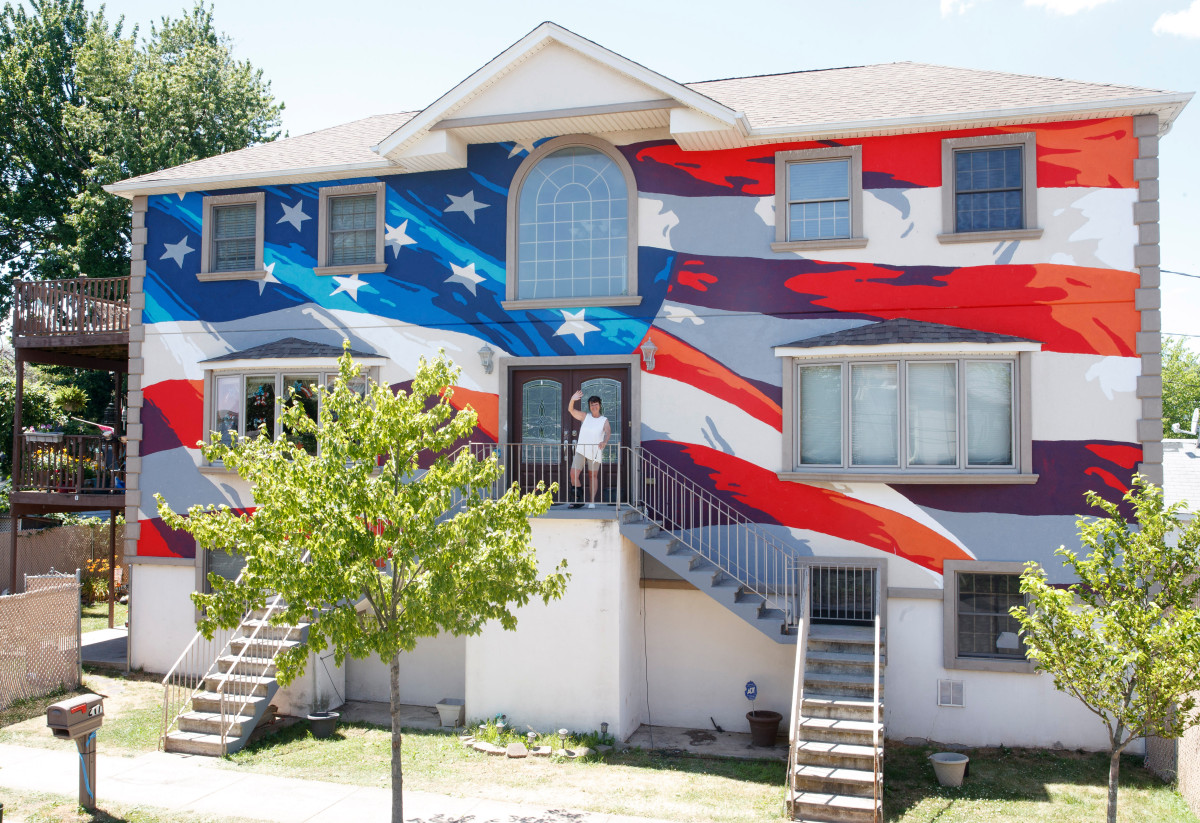 “There are artists who sit and do landscapes. I’m making an American portrait, “said LoBaido, 55, who estimates he has painted around 1,000 flags on buildings – sometimes on the roof, sometimes covering the entire facade.

A few days ago, he put the finishing touches on Joan Brodick’s two-story house in Midland Beach, just in time for the Fourth of July.

LoBaido’s patriotic mission began when he had just begun in the art world in the 1990s, and he saw an exhibition at the School of the Art Institute which had a flag on the floor.

“I see disgusting hatred for all Americans. “I don’t want any part of that,” he told The Post. In the mid-90s he began painting giant flags on whatever surface he could, including cars. “People laugh at me, nobody wants it,” he said.

He would go door to door around Staten Island, begging people to let him paint, for free, their shop, house or garage with a flag motif. Finally he convinced a number of people. Then in 2001, everything changed.

“Right after 9/11, everyone became patriotic. That is, ‘Get those flags!’ “Said LoBaido, who even painted Old Glory on the city’s hearth and still does not charge for his work. “Suddenly everyone wanted a flag mural. I have already ordered. “

Brodick, a 67-year-old great-grandmother, was pleased with the new flag mural that adorned her house, and said it had already attracted great attention.

“Everybody honking – very beautiful,” Brodick said, adding that his late husband, Paul, a 50-year-old Navy veteran, would be “very proud.

“People die for this flag, they give up everything so we can have freedom. I believe and love this country, and I want people to know. “

But not everyone is a fan of LoBaido skills. He has been arrested 12 times, he said, including in 1999 when he threw horse dung in the Brooklyn Museum in protest at an exhibition in which one of the Virgin Mary’s breasts was formed from elephant dung. He was also arrested in December 2001, when he was painting a flag outside the Upper West Side school to protest the district council that kept the Pledge of Allegiance in class.

Earlier this month, he said, he was pressured to erase a statue – “two white figures and two black figures helping each other push the stairs so they could reach a sign of peace” – he had put up in front of the Borough Hall on Staten Island. LoBaido, who described it as “apolitical,” said other local artists “lost their noodles” because he was a Trump supporter and they threatened to damage his work. He also claims someone created a Facebook group titled “Exposing Staten Island Racists,” with his name and address at the top of the list.

“That is a very emotional part and I don’t want anyone to be emotionally hurt by seeing it stained,” he said of the decision to remove the statue.

But nothing, he said, would stop him from painting the flag at home.

“The art world has snatched s-t out of me,” he said. “But my artwork is not hoity-toity. I am the worker’s artist,” he said.

See also  The Wisconsin Senator was reportedly attacked during the protest