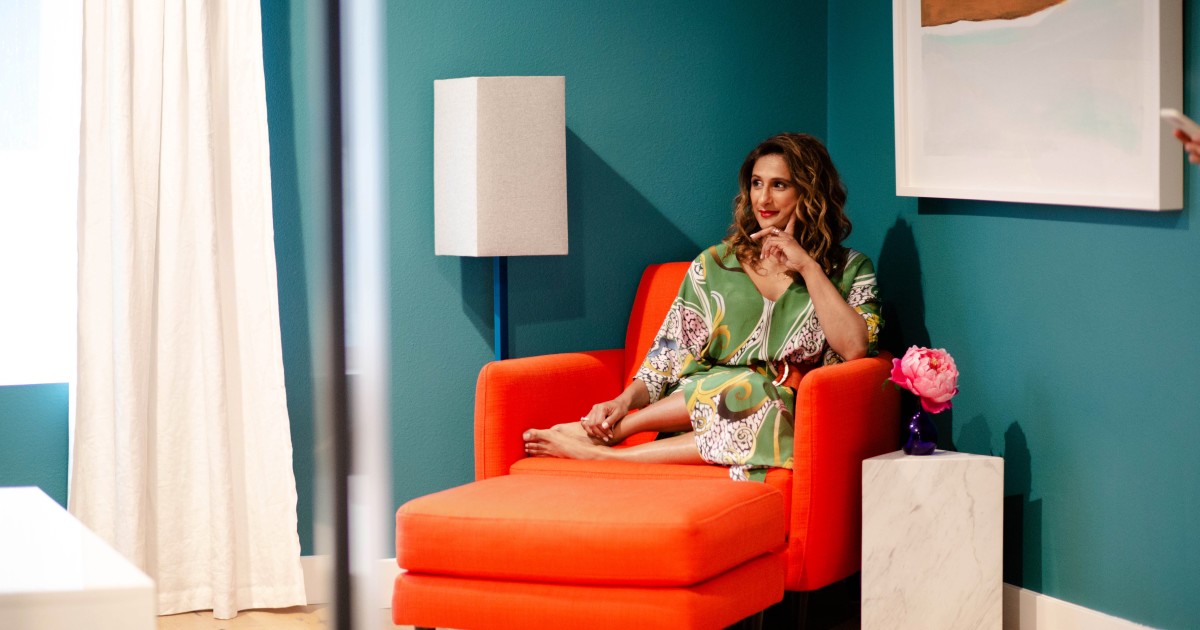 Color – and more – is the purpose of the actress Sarayu Blue when he transformed a room in his Studio City house into some kind of private resting place. He painted deep turquoise walls, anchored in one corner with an orange lounge chair, laid a flower carpet from Anthropologie and pulled out a vase, which he continued to fill with fresh bouquets.

“I want a place to feel friendly and warm,” said Blue, who recently appeared on the CBS comedy “The Unicorn” and “Medical Police” on Netflix. He also voiced the palace tailor’s character in the Disney Junior animated series “Mira, Royal Detective.” “I’m a big fan of bright colors. I like things that are clean and simple, but I don’t want it to feel cold or like you can’t touch anything. “

She shares a 1,800-square-foot city house with her husband, producer Jonathan M. Blue, and their 4-year-old rescue Maltipoo, Otis. When they moved two years ago, they removed the carpet, installed new floors, lowered wall sconces and lamps and painted everything white – but nothing changed much beyond that.

“We want to stay in it first and feel it before decorating,” he said.

A spare room upstairs with its own bathroom became a guest room, but that was hardly used unless Blue was preparing for an event and asked for his glamor army to be there. Earlier this year, he fixed the room, instilled a rich color and gave him three sofa cushions from his 2018 NBC sitcom set, “I Feel Bad.” When arranged into one, the pillow is translated “You Do You.”

Why is this your favorite room?

My husband has an office downstairs, a guy-watching soccer room; for a long time my office was a living room. I realized that I needed my own creative space.

What are you doing here?

I don’t come here unless I work or take place for myself – I’m a lone person. I have coffee. I read. I lit my candle. I want a place to write or do yoga; this room for me.

How do you redecorate?

We removed the guest bed and got a pull-out sofa bed instead, just in case people wanted to live with us. I like to mix eclectic styles and tastes. I like brass fittings. The small sink here has a chrome faucet, but I went online and found a brass faucet that fit and fit perfectly without requiring me to break anything. And I brought this ottoman, which I had for 10 years. I bought it then as a big gift for myself when I lived in a tiny old apartment.

So instead of working with a decorator, you make it yourself?

I like playing – I move things from other parts of the house here, like this triangular marble table. I am lucky to have a friend who I can run if I need an opinion. Mostly I like to see what’s out there and find offers.

Are there parts that mean a lot to you?

This coffee table is from West Elm; it is part of our marriage record, and a group of our friends get together and buy it. I like that it has storage. I don’t need a desk, but I need a place to work and store my computer afterwards. And I like the mold on the wall. That was by an artist named Caryn Owen. That piece is “Arctic Ice” – we bought it for a wall in the dining room, but it looks small there, so I moved it here. I like how calm it is; there is something very soothing about it.

And there is a story about an orange chair.

When Jon and I started dating, he said he hated orange. I asked him, “How do you hate color?” It turns out that it goes very far into family history. Orange is the color of a sports team that rivals a family-supported team. It takes a minute to think about it. Very disappointed, the chair was still there. And now, oranges are a major part of his life.

Learn how to sell anything on Amazon with this course