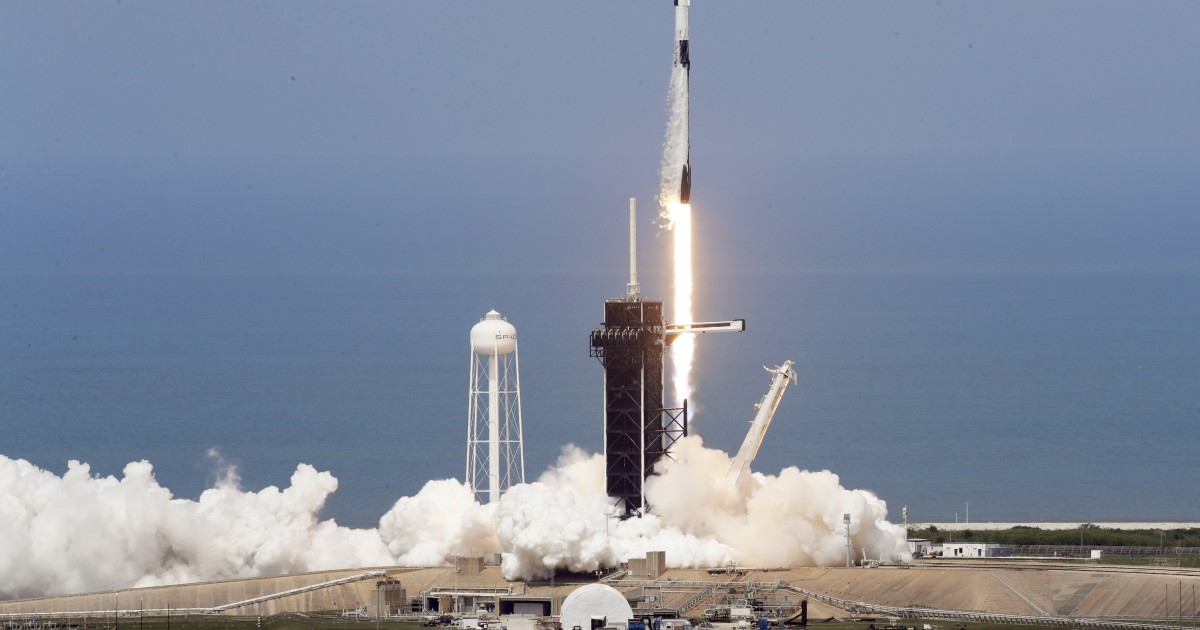 For the first time in nine years, NASA astronauts were launched to orbit from the U.S. soil. And for the first time, their trip to space was a craft designed and owned by a private company.

Astronauts Bob Behnken and Doug Hurley sky rocketed on Saturday afternoon on SpaceX Crew Dragon capsules, en route to the International Space Station. Despite some initial weather concerns, the SpaceX’s Falcon 9 rocket took off from the Kennedy Space Center in Florida at 12:22 p.m. EDT. Capsules are arranged to dock at the station early Sunday morning at 10:29 EDT.

Saturday’s launch was the start of a test flight evaluating Crew Dragon’s system and capabilities. As the first crew to board the capsule, Behnken and Hurley will make sure everything functions as expected before NASA authorizes the spacecraft to regularly transport its astronauts to the space station.

The launch, and the years of work leading up to this point, marked a change in how NASA did business.

For decades, NASA owned and operated aircraft that transported astronauts into space. The contractors built the spacecraft, but they did it with large input from NASA.

After the shuttle retired in 2011, the US only relied on Russia to transport its astronauts to the space station. The ride was not cheap – seats in the Russian Soyuz spacecraft cost around $ 70 million to $ 80 million.

In 2014, NASA awarded a multibillion dollar contract to SpaceX and Boeing Co. to develop crafts to transport U.S. astronauts to the space station.

See also  Britain is the worst-hit country outside of the US and Brazil. It STILL won't wear masks

Under these contracts, SpaceX and Boeing designed and owned the aircraft and NASA was only a customer. NASA said the arrangement made the agency focus its attention on more ambitious missions to the moon or Mars, while commercial companies took over more routine space flight operations in low-Earth orbit, such as carrying cargo or crew to the space station.

This shift is also a way of saving costs when NASA’s budget no longer approaches the heights reached in the 1960s during the Apollo program.

Then, the Cold War blazed between the US and the Soviet Union. The two countries are in the middle of a space race to place the first man on the moon, and NASA’s budget reflects that. In 1966, the space agency had an inflation-adjusted budget of around $ 47 billion; in 2020, NASA’s budget is $ 22.6 billion.

“You will not get that Cold War incentive every time,” said Lori Garver, former deputy administrator of NASA from 2009 to 2013. “Without the Cold War, we need to reduce costs to be able to make this progress, and we do that now.”

SpaceX made history in 2012 when its Dragon cargo capsule became the first commercial spaceship to dock with the space station. The Hawthorne Company now regularly transports cargo for NASA to the space station, as does Northrop Grumman Corp.

On Saturday, SpaceX reached another milestone when its Crew Dragon capsule became the first private spaceship to carry astronauts into orbit.

SpaceX has long aspired to launch humans into space. The company, led by Chief Executive Elon Musk, plans to eventually use the Dragon Crew capsule to take tourists on their way to the space station and even higher in space.

“We were founded in 2002 to fly people into low-Earth orbit, the moon and Mars,” SpaceX President Gwynne Shotwell told reporters earlier this month. “NASA is certainly possible.”

In 18 years, SpaceX has changed from upstart beginner to aerospace titan. The company whose first three rocket launches ended in failure has now made the first-stage booster back to Earth look routine and gather a variety of customers including commercial satellite operators, U.S. military. and NASA.

The main purpose of SpaceX is to colonize Mars. The company is working on a prototype of its Mars spacecraft called Starship, even though the initial version failed in testing.

The launch of Crew Dragon was originally set for Wednesday, but bad weather – in particular, too much electricity in the atmosphere – forced the scrub only 15 minutes before taking off.

Earlier Saturday, there was a 50% chance of launching to take off, NASA Administrator Jim Bridenstine said at the launch of the webcast that morning. About two hours before takeoff, a camera showing the SpaceX Falcon 9 rocket and the Crew Dragon capsule on the launchpad had raindrops on the lens.

But in the end, the weather cooperated.

PIA flight ‘black box’ is destroyed for inspection in France